The United States Mint has provided the release dates for their 2011 annual sets. The Proof Set, Silver Proof Set, and Uncirculated Mint Set will be available in January and February 2011.

This will represent a much earlier release date than typical for these popular products. The US Mint decided to release the sets earlier in the year to allow customers the opportunity to purchase them for their collections earlier or for gift giving occasions throughout the year. For 2010, the sets were released in July and August. 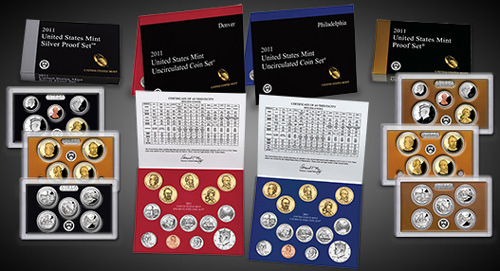 The 2011 Proof Set will include 14 different coins struck at the San Francisco Mint in proof quality. The coins will be housed in three separate plastic lenses and placed within an outer box featuring the US Mint’s newly adopted branding. The release date for the sets will be January 11, 2011.

The 2011 Silver Proof Set, also includes 14 coins, but the dime, 5 quarters, and half dollar will be struck in a special composition of 90% silver. This product is scheduled to be released on January 25, 2011.

Finally, the 2011 Mint Set will include 28 coins. These will be struck at the Philadelphia and Denver Mints with brilliant uncirculated finishes. This will represent a change from recent years when the coins included in the set carried a satin finish. The release date for the set will be February 8, 2011.

Based on previous statements provided by the United States Mint, the currently available 2010 annual sets will continue to be available until the end of 2011.