The IUCN Red List of Threatened Species (also known as the IUCN Red List or Red Data List) was founded in 1963 and is the world’s most comprehensive inventory of the global conservation status of biological species. A series of Regional Red Lists are produced by countries or organizations which assess the risk of extinction to species within a political management unit.

The latest three coins in this long-running and popular series features the Alpine Weasel, The Yellow-Billed Loon, and the Emerald Rosalia Beetle. Designed by the artist E.V. Kramskaya and struck by the Moscow Mint facility, the obverse of each coin depicts the animal or insect in their own natural environment along with the name of the species in Cyrillic characters along the edge. 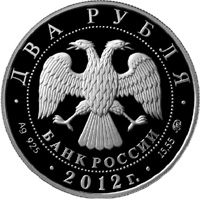 The reverse of each coin includes the emblem of the Bank of Russia, the two-headed eagle with wings pointed in a downward position. Under the emblem in a semi-circular inscription is the text “БАНК РОССИИ” (Bank of Russia) framed by a circle of dots and inscriptions along the rim. The denomination of the coins are positioned above the emblem written in text as “ДВА РУБЛЯ” (Two Rubles) and the emblem is both the year of issue and the indications of the metal and its fineness and mintmark on either side.

The coins are struck to proof quality in sterling silver with a weight of 17 grams and a diameter of 33 mm. Each coin is limited to 5,000 pieces. Bank of Russia coins are mostly available at authorized numismatic distributors world-wide.

For more information on these and other coins issued by the Central Bank of the Russian Federation, please visit their website at: http://www.cbr.ru/eng/bank-notes_coins/Base_of_memorable_coins/