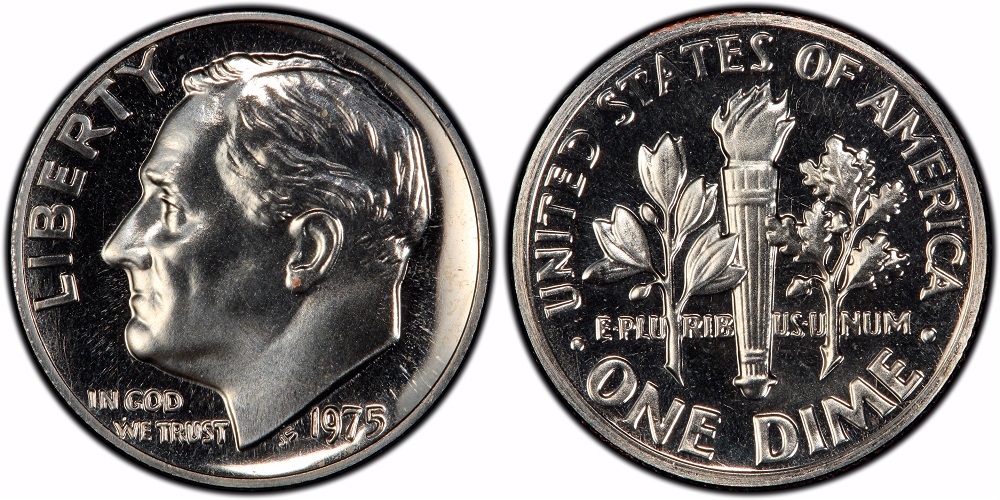 September 16, 2019 — The most valuable United States modern coin ever sold at auction, a 1975 Proof No S dime, changed hands twice in less than a week, both times for record prices.

The finer of the two known 1975 Proof dimes without the San Francisco “S” mint mark was jointly purchased on September 6, 2019, for $456,000 by modern coin specialist Mitch Spivack along with his son, Justin, owner of MonsterCoinMart in Orange County California, and with collector Steven Heller also as a partner on the deal. They then sold it five days later through agent Nick Cascio for $516,000 to an avid Roosevelt dime collector who wants to remain anonymous.

Graded PCGS PR-68 and ranked in first place in the book, 100 Greatest U.S. Modern Coins, this 1975 Proof No S dime is now the highlight of the Halcyon Collection, one of the all-time finest collections of Roosevelt dimes in the PCGS Set Registry.

“I purchased the 1975 No S ‘Roosie’ out of the Heritage Auctions sale in Long Beach, California, along with Steven Heller and my son Justin as partners. We received an offer for the dime the very next day, and a few days later consummated the sale of the dime,” explained Mitch Spivack, a leading expert in modern United States coinage, 1932-to-date.

“It was a great honor for me to own the finest known 1975 No S dime if even for just a few days,” he added. ”As the owner of the unique 1976 No S silver Eisenhower dollar for many years now, the most valuable and rare U.S. modern coin in existence, I always dreamed of also owning the 1975 No S dime. That dream became a reality to me!”

This coin and the only other known 1975 Proof No S dime originally were discovered by a California woman who purchased five Proof sets from the United States Mint in 1975.

When we were approached by our long-time good friend Nick Cascio on behalf of the owner of the Halcyon Collection, who is a very good customer of ours, I knew that he was the perfect person to own this crown jewel of modern numismatic history. His passion for Roosevelt dime collecting is truly second to none and as far as I’m concerned, the finest known ‘75 No S could not be going to a better home.

Lifelong Roosevelt dime collector Heller, who partnered with the Spivacks to purchase the dime at auction, said:

The “Roosie” community is a very compatible group of dedicated collectors who have shared a long history of working together to help each other toward achieving the best sets possible. I am happy I was able to again assist a truly dedicated Roosie collector to acquire the coin of his dreams for what should soon be the first Hall of Fame Registry collection for Roosevelt dimes.

Cascio, a collector of Roosevelt dimes for over 30 years, said his “greatest and proudest moment” was acquiring from the Spivacks and Heller “the rarest of all Roosevelt dimes on behalf of an astute collector who already has a world-class collection. With the addition of the ‘75 No S, I have little doubt his set will become the first Roosevelt dime collection awarded Hall of Fame status by PCGS.”

Additional information about the fascinating acquisition of the coin and background about those involved in the history-making numismatic transactions is available online.