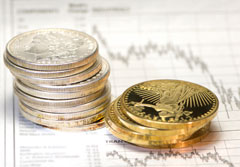 Gold and silver prices have been reaching new record highs this past week, a continuation of what we have seen for the past seven weeks.  What are not so obvious are some of the underlying fresh news developments that are feeding this trend.

During Asian trading hours last Thursday (overnight Wednesday to Thursday in the US), Singapore’s monetary authority tightened the policy of the secret band in which the Singapore dollar was allowed to trade against other currencies.  This step signified the relative strength of the Singapore currency, especially against the US dollar.  In response, the value of the dollar quickly fell and gold and silver prices jumped.

For two years, the Commodity Futures Trading Commission (CFTC) has been studying the question of whether the COMEX silver market is rigged.  The general expectation is that the CFTC would eventually issue a report that would whitewash the problem, saying that it could not find evidence of market fixing, as has often happened with CFTC investigations in the past.  However, a monkey wrench has been thrown into this process, if this is what the CFTC was attempting to do.  CFTC Commissioner Bart Chilton issued a statement that if the CFTC did not issue its own report soon, then he would go public with the information that he has gathered.  Some analysts suspect that both the CFTC and Chilton are waiting for prices to go significantly higher before they lower the boom on prime suspect JP Morgan Chase, the company that has sustained a loss of nearly $1 billion on its COMEX silver short position over the past two months (I may be cynical, but I bet this wasn’t included in JPMorgan Chase’s latest earnings report).

The jobs market and the real estate housing market are major factors that investors consider when investing in the stock market.  You can be certain that the statistics being reported recently and right up until the November elections are being cast in as favorable light as possible, if not actually falsified, in order to give incumbent politicians the maximum benefit in their reelection efforts.  But, what this also implies is that once the elections are over, there will be an effort to hang out the bad news (the “dirty laundry”) as soon as possible under the hope that voters will have forgotten about it two years from now.  As a result, though the US stock market should benefit from the expected increase in “quantitative easing” (inflation of the money supply) that could be announced as early as the day after the election—a move that would normally be positive for stocks—look for a real possibility of a serious drop in stock prices by the end of 2010.

By the way, the current relative strength of the US stock market is drawing attention away from rising gold and silver prices, to give you just one more reason why more people are not paying that much attention to precious metals.

On October 14, the Commerce department reported that the August trade deficit with China, the balance of imports from China into the US minus the US exports to China, set a new record at $35 billion.  The general public’s perception is that US imports from China must be declining along with the fall of the US dollar (down more than 11% in the past four months) so that financially challenged Americans must be reining in their spending.  What they don’t realize is that as the value of the dollar falls, that makes the imports that do come in (such as petroleum) more expensive.

In a front page commentary in the overseas edition of the People’s Daily (described as the chief mouthpiece for the Chinese Communist Party) last week, Li Xiangyang, who heads the Asia department of the Chinese Academy of Social Sciences which is a top Chinese government think tank, said that continued intervention in currency markets by developed economies would deal a blow to global economic recovery.  His commentary is almost certainly in response to recent pronouncements by US president Obama, Treasury Secretary Geithner, Federal Reserve Chair Bernanke, and the presidents of the Federal Reserve Banks of Boston, Chicago, and New York stating that the value of the US dollar must soon decline against other currencies.

Specifically, Li said, “The dollar’s depreciation may appear to be market-driven.  In reality, it is a depreciation colored by very strong, deliberate actions.”

As I have explained before, it is rare for Chinese policies to be announced by top government officials.  Instead, statements by minor officials or think tank professionals are the most reliable indicators.  Chinese leaders had previously warned the loose monetary policies of the US posed problems.  Li’s article was perhaps the strongest ever expression of Chinese anger over US financial policies.  It is the latest salvo in the developing global currency wars, where the aim is for governments issuing major currencies to try to destroy the value of their own currency by more than the currencies of other nations.

Most of you are probably familiar with the wide suspension of mortgage foreclosure activity, which followed the discovery that many of the packages of foreclosure documents were legally defective.  One particular problem caused by this crisis that has received very little attention is the problems facing title insurance companies.  Title insurance is mandatory for all mortgages, yet the title insurance companies are now refusing to issue policies for any deed with a questionable pedigree.  In fact, the title insurance companies may already be facing a legal nightmare for the hundreds of thousands of policies issued in the past few years that may be subject to litigation.  This one problem could bring the US housing market into almost total gridlock, serving as a huge obstacle to any economic recovery.

The foregoing is not a comprehensive explanation of all the reasons why the US dollar is on the brink of further decline, resulting in higher precious metals prices.  Rather, they are just examples of the growing body of developments that the public is starting to learn that will lead to that result.