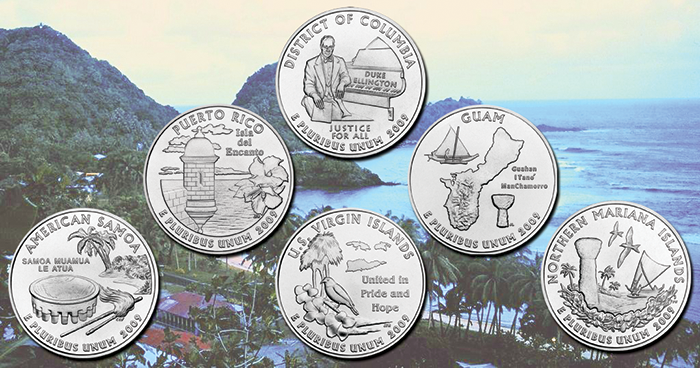 Several weeks ago, a Coin Update reader asked us to produce a checklist of the D.C. and Territories quarters from the Mint’s 50 State Quarters Program. We were happy to comply, and the quarters, with their mintages, are listed below. According to the Guide Book of United States Coins,

The United States Mint 50 State Quarters® Program begun in 1999 produced a series of 50 quarter dollar coins with special designs honoring each state. Five different designs were issued each year from 1999 through 2008. States were commemorated in the order of their entrance into statehood…

Each state theme was proposed, and approved, by the governor of that state. Final designs were created by Mint personnel.

The following checklist can be downloaded for printing by right-clicking and selecting “save as.”  A complete checklist of the program, from 1999 through 2009 (including the D.C. and Territories strikes), can be found in the Check List and Record Book of United States and Canadian Coins.
Hover to zoom: