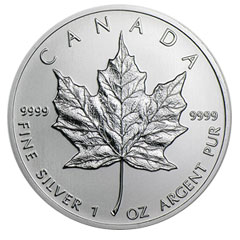 Amidst a surge in demand, the Royal Canadian Mint has started rationing 2013 Silver Maple Leaf bullion coins at the primary distributor level. This follows the news earlier this month that the United States Mint had temporarily sold out of their 2013-dated silver bullion coins after receiving orders for more than 6 million coins and would begin rationing supplies as soon as sales resume.

Less information is known about the silver bullion coin situation in Canada, as the RCM does not publicly report sales levels outside of their required financial filings. A representative for the Mint did confirm that coins are currently being allocated.

Due to very high demand for SML coins, we are carefully managing supply to ensure all our distributors are served and we continue to take orders.  We do not disclose details of any customer transaction and specific 2013 numbers will be made available at our regular reporting intervals later in the year.

According to the most recent annual report, the Royal Canadian Mint achieved record annual sales of 23.1 million Silver Maples for 2011. According to the available quarterly statements, The RCM had sold 12.7 million Silver Maples through the third quarter of 2012, trailing the pace of sales from the prior year. Figures are not available for the fourth quarter or for the 2013 year to date.

In similar fashion, the United States Mint had achieved record sales for their American Silver Eagle during 2011, followed by declines for much of 2012. The pace of sales had accelerated starting in the final months of 2012, culminating with the early sell out of 2012-dated Silver Eagles in mid-December. When sales resumed with 2013-dated coins in early January, even stronger demand was experienced resulting in another temporary sell out and the plan to allocate supplies once sales are resumed.

The immediate impact of the rationing programs imposed by the RCM and US Mint has been higher premiums charged by some bullion dealers for the rationed products. Precious metals investors can still seek out lower premium silver bullion coins produced by other world mints or other physical silver bullion product options.