On December 8, 2014, Numismatik Lanz will conduct auction sale #159 in their premises, Maximiliansplatz 10 in Munich. Almost 1,000 lots will be for sale. A first focus is on ancient coins with Celts, Greeks, Romans and Byzantium. The Roman-German Empire and the foreign countries are present, as well. The sale is highlighted by two special collections: the Andreas D. Mazarakis Collection featuring Venetian ducats and their Anatolian imitations as well as the house collection of the fraternity Austria / Vienna of Universitas in Nummis.

The auction will kick off with 18 Celtic coins including a rare, so far unpublished piece, a Germanic imitation of a siliqua of Arcadius dating from the 5th cent. (17, EF, 1,500 EUR).

Next in line are more than 250 lots of Greek coins. Only one, extremely rare piece may serve as an example for the many fractions included in this sale, an Archaic obol from Poseidonia depicting Poseidon in the ‘Knielaufschema’ (28, EF, 1,200 EUR). Considerably higher will be the sum to be paid by the new owner of the tetradrachm from Acragas with the depiction of two eagles gorging the hare on the reverse (36, EF, 15,000 EUR). From Camarina comes the gold litra with the head of Athena of its obverse (40, ab. EF, 9,000 EUR). A very rare subject is encountered on the reverse of the didrachm from Panormos (48, EF, 15,000 EUR). The dog depicted there belongs to the Tesem, a type of dog that was already known to ancient Egyptian art and disseminated probably by sea-faring peoples. 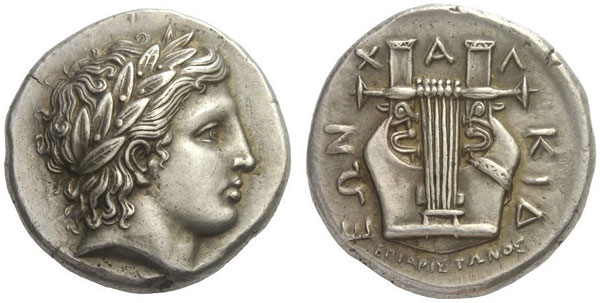 Apart from that, the auction offers a rich selection of Macedonian pieces, including a tetradrachm from Olynthos which can be considered the quintessential Classical coin (79, EF, 10,000 EUR). Not yet fully explained is the attribution of another piece, an octodrachm from the time of Alexander I (82, EF, 20,000 EUR). Either Alexander himself was the minting authority or the tribe of the Bisaltae. A superb posthumous stater of Philipp II, which exhibits the well-known portrait that is sometimes identified as Alexander the Great (90, EF, 5,000 EUR), leads over to a series of coins from Demetrius Poliorcetes, including lot #115, a veristic likeness with the artist’s signature (115, EF, 4,000 EUR).

A number of Athenian tetradrachms comes next, which, amongst others, features a magnificent piece on a broad flan that features even the helmet’s crest of the city goddess (198, EF, 25,000 EUR).

The Seleucids surprise with an extraordinary tetradrachm of Seleucus I, exhibiting a clear-cut portrait of the great Alexander (264, EF, 6,000 EUR). 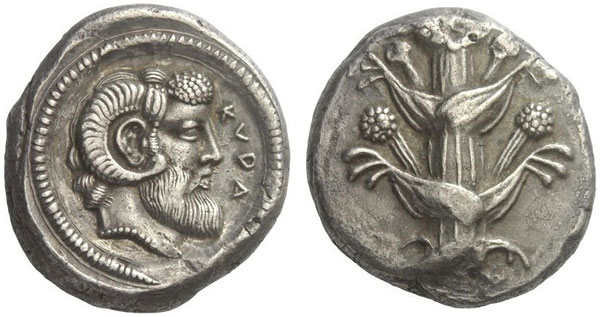 Spectacular highlight and final item of the Greek coins is an exceptionally well struck tetradrachm from Cyrene, minted around 460, depicting the silphion plant on the obverse and the Archaizing head of Zeus Ammon on the reverse (272, EF, 20,000 EUR).

The section of Roman coins start with a series of Republican denarii with lot #274. The expressive portrait of a wild barbarian can be encountered on the denarius of the mint master L. Hostilius Saserna (307, EF, 3,000 EUR). Just 120 Euros is the starting price of an extremely rare quinarius of M. Iunius Brutus (312, VF, 200 EUR). This piece once again testifies to the fact that it takes only little money for the attentive collector to acquire exciting rarities.

Gold, silver or bronze, there are all denominations of the Roman Empire found in that catalogue. Rarities are daily fare, like the extremely rare drachm whose obverse depicts the portrait of the Thracian king Rhoimetalkes (331, ab. EF, 3,000 EUR). Representing the rare bronzes is the medallion of Hadrian featuring owl, eagle and peacock on the reverse as attributes of the Capitoline Triad (428, ab. EF/VF, 2,000 EUR). The marvelous aureus of Aelius Cesar with Concordia enthroned should not go unmentioned, either (457, EF, 15,000 EUR). Special emphasis deserves the extraordinary double aureus of Gallienus of which only two examples have been known so far (553, EF, 10,000 EUR). That the coinage of the barracks emperors needs not to be boring is proven by exceptionally rare antoniniani with fascinating unusual bust types, like the ones of Gordian III (537, ab. EF, 800 EUR) and Aurelian (558, ab. EF, 1,000 EUR), or rare reverses like the quinarius of Probus with the muse Calliope (565, EF, 1,500 EUR).

Rarities from late Roman times, like the solidus of Constantinus II from Thessalonike (597, EF, 15,000 EUR), lead over to the Byzantine section. The biggest rarity there is a gold hyperpyron of John II Komnenos, the emperor shown in the famous Hagia Sophia mosaic (644, EF, 15,000 EUR). Let us conclude the preview of ancient coins with an extraordinarily well preserved spintria (657, EF, 6,000 EUR).

At the turn of medieval to modern times, at the border between orient and occident the collection field of Andreas D. Mazarakis is located: the ducats of Venice and their imitations. The geographic spectrum ranges from the Crimea and the Greek islands to the Ottoman Empire and India. Mr. Mazarakis is the author of the work of reference “Die Dukaten von Venedig und ihre Imitationen aus Anatolien vom 14. – 16. Jahrhundert”, published in Athens in 2012. It comes as no surprise, therefore, that his collection includes great rarities, like, for example, a ducat of the Genoese colony Pera which produced these pieces for their trade with the Black sea region (671, EF, 3,000 EUR).

The Roman-German Empire follows next, which – as usual with Lanz – also subsumes Germany. The connoisseur discovers, amongst other items, a Brunwick loser of 4 thaler from the Ferrari Collection from 1662, minted in Clausthal, featuring the horse of the House of Welfen jumping across a mine which is rendered in great detail (765, EF, 6,000 EUR).

The world coins come up with two Chinese showpieces. The gold 1 dollar piece n. y., minted in 1916 by order of Yuan Shikai (802, ab. BU, 20,000 EUR), exhibits in a splendid uniform the man who was the last central power of the Chinese Republic. Shortly after his death, the civil war began. One of the most powerful figures of this conflict was Duan Qirui who was also one of the warlords. His half-length portrait can be seen on a gold dollar n. y. from 1924 (803, ab. BU, 20,000 EUR).

For the special collectors a small series of coins from Nepal and some Russian coins should be emphasized.

The auction sale is concluded by the house collection of the Catholic Austrian Students’ Fraternity Austria, Vienna. It consists mainly of medals addressing the university topic. The specialized collector is given the splendid opportunity to acquire interesting pieces at low prices. You may join the bidding with just 30 euros. It goes without saying that more expensive items are available for sale, too, like the very rare 1 ¼ ducat 1756 on the completion of the Vienna University building (853, ab. BU, 4,000 EUR).