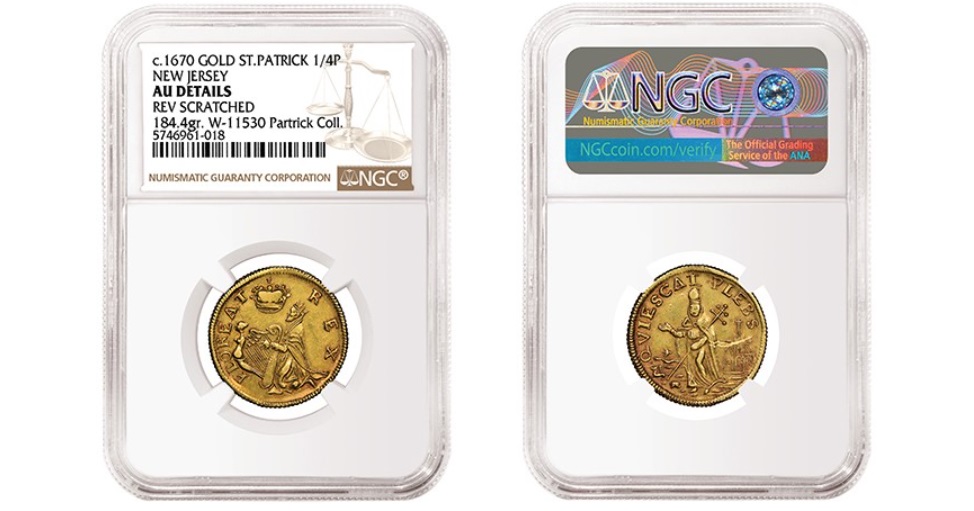 Could this be the luck of the Irish? A stunning St. Patrick gold coin certified by Numismatic Guaranty Corporation (NGC) is one of the highlights of a Heritage Auction sale that is being held on St. Patrick’s Day and the following day, March 18, 2021. Bidding is already underway for the sale of colonial rarities from the Donald G. Partrick Collection.

The circa 1670 gold St. Patrick farthing graded NGC Details AU (lot 15006) is the only one known to exist and was likely a presentation piece. Mark Newby, a Dublin merchant, emigrated to what today is New Jersey, bringing a large quantity of St. Patrick coins with him, which authorities allowed to circulate as legal tender.

Another type of copper coin circulated in New Jersey in the 1780s, a time of fervent experimentation in currency before the advent of the U.S. Mint. These New Jersey coppers, which were officially sanctioned by the state government, come in a wide variety of designs, some much rarer than others.

Known to be the only surviving example, a unique 1787 WM Above Plow New Jersey copper (Maris 62.5-r) graded NGC F-15 (lot 15105) is among the highlights of the sale. Distinct capital letters “WM” impressed in the obverse between the plow and the horse head are believed to be the initials of New Jersey Copper engraver Walter Mould. 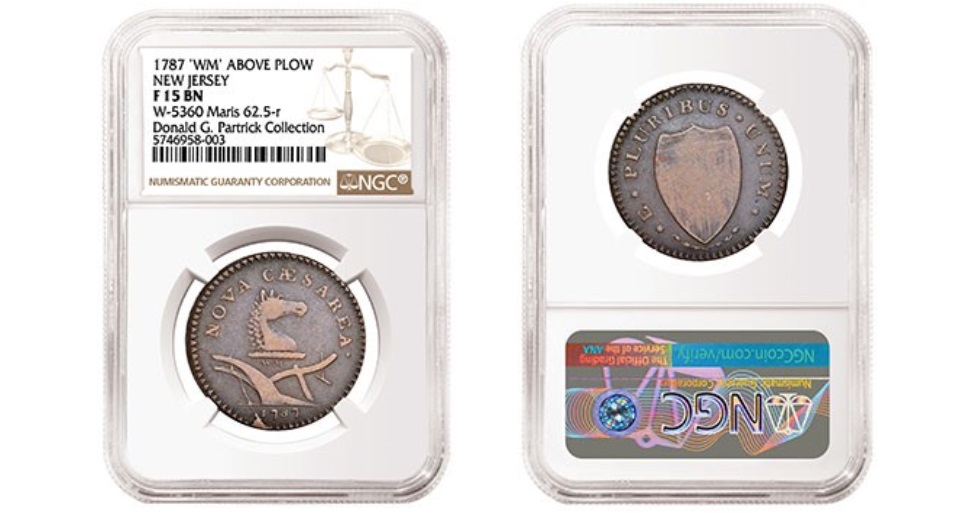 Mould established Morristown Mint in 1787 and began striking New Jersey coppers. It is believed this was Mould’s first legitimate issued coinage because his initials never appeared on any other die prepared by him. It is likely that he was ordered to remove his initials from the design and destroy all existing pieces with the markings.

A 1786 Date Under Plow Beam New Jersey copper (Maris 7-E) graded NGC VF-30 (lot 15023) is another rarity up for auction. This coin has a distinctive die orientation shared with at least two other examples; rather than the prevailing 180-degree “coin turn” alignment, this piece was struck with a 10-degree alignment, much closer to what is known as “medal turn.” Additionally, this lot is one of 10 known coins with the date beneath the plow beam, solidifying it as one of the rarest colonial coins in existence.

Another highlight is a 1786 Washington and Shield New Jersey copper (Maris 4-C) graded NGC VF-25 (lot 15019). It pre-dates George Washington’s presidency and depicts a calm bust of the Revolutionary War hero. The ultra-rare coin is one of three known and is one of the earliest and rarest pieces to portray Washington. 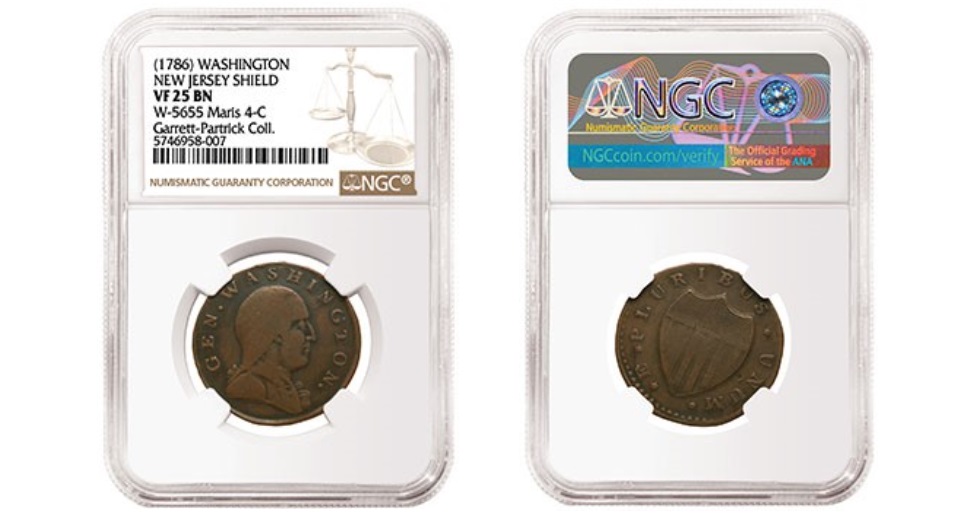 The Partrick Collection has already realized more than $47 million, including another NGC-certified New Jersey copper that realized $552,000 at a January sale. That sale also included the centerpiece of the Partrick Collection, an NGC-certified 1787 Brasher doubloon that realized $9.36 million, which set numerous records, including the most expensive coin ever sold at a Heritage auction.

The March sale of rarities from the Partrick Collection of Extraordinary Colonial Coinage features more than 500 NGC-certified additional coins, tokens, and medals, including: