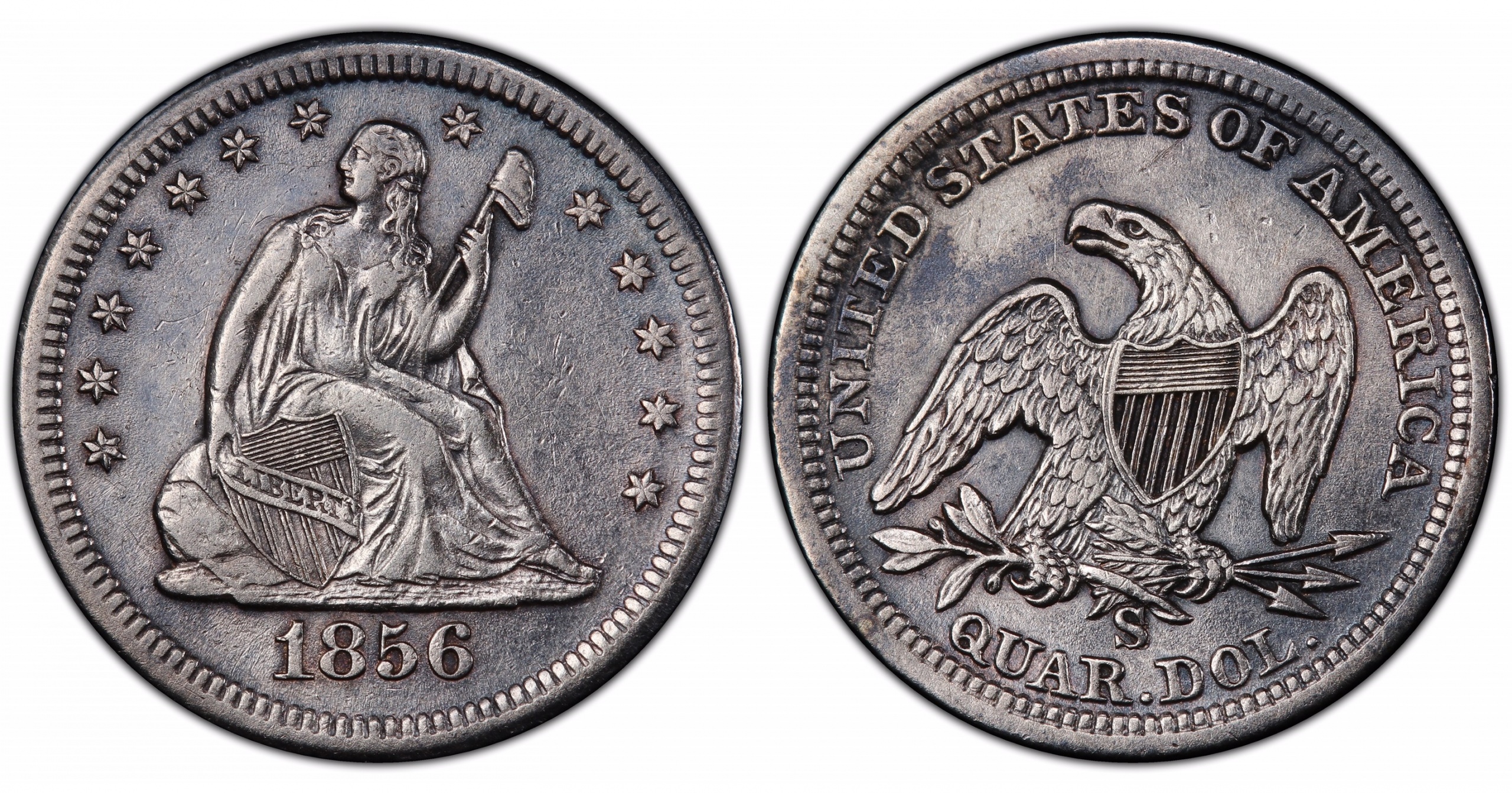 This 1856 large “S” over small “s” mint mark quarter dollar, now graded PCGS EF-45, is one of nine examples of the elusive variety recently discovered in the treasure recovered from the fabled “Ship of Gold,” the S.S. Central America. (Image courtesy of Professional Coin Grading Service). Hover to zoom.

“This is a major numismatic finding! The ‘Ship of Gold’ has brought us over a half dozen 1856 S/s large mint mark over small mint mark silver quarters. The ‘S’ over ‘s’ is the most pronounced I have ever seen with two overlapping mint marks clear even to the naked eye. We’ve nick-named this latest S.S. Central America discovery as the ‘S’ over ‘s’ Central America,” said Dwight Manley, CGMG managing partner.

“Considering the preponderance of Philadelphia and New Orleans Mint coins found in the recovered treasure, it would appear these came from a batch of coins brought aboard by a miner, and ended up in the safe as did the miners’ pokes (packets containing gold and/or coins). What a numismatic miracle to have such a treasure trove aboard the S.S. Central America,” Manley stated.

The coins were part of the amazing treasure retrieved from the S.S. Central America in 2014. Most of the 1856-S/s coins were among the 503 silver quarter dollars discovered in a canvas bag in the purser’s sealed iron box in the ship’s safe on the seabed more than 7,000 feet below the Atlantic Ocean’s surface. 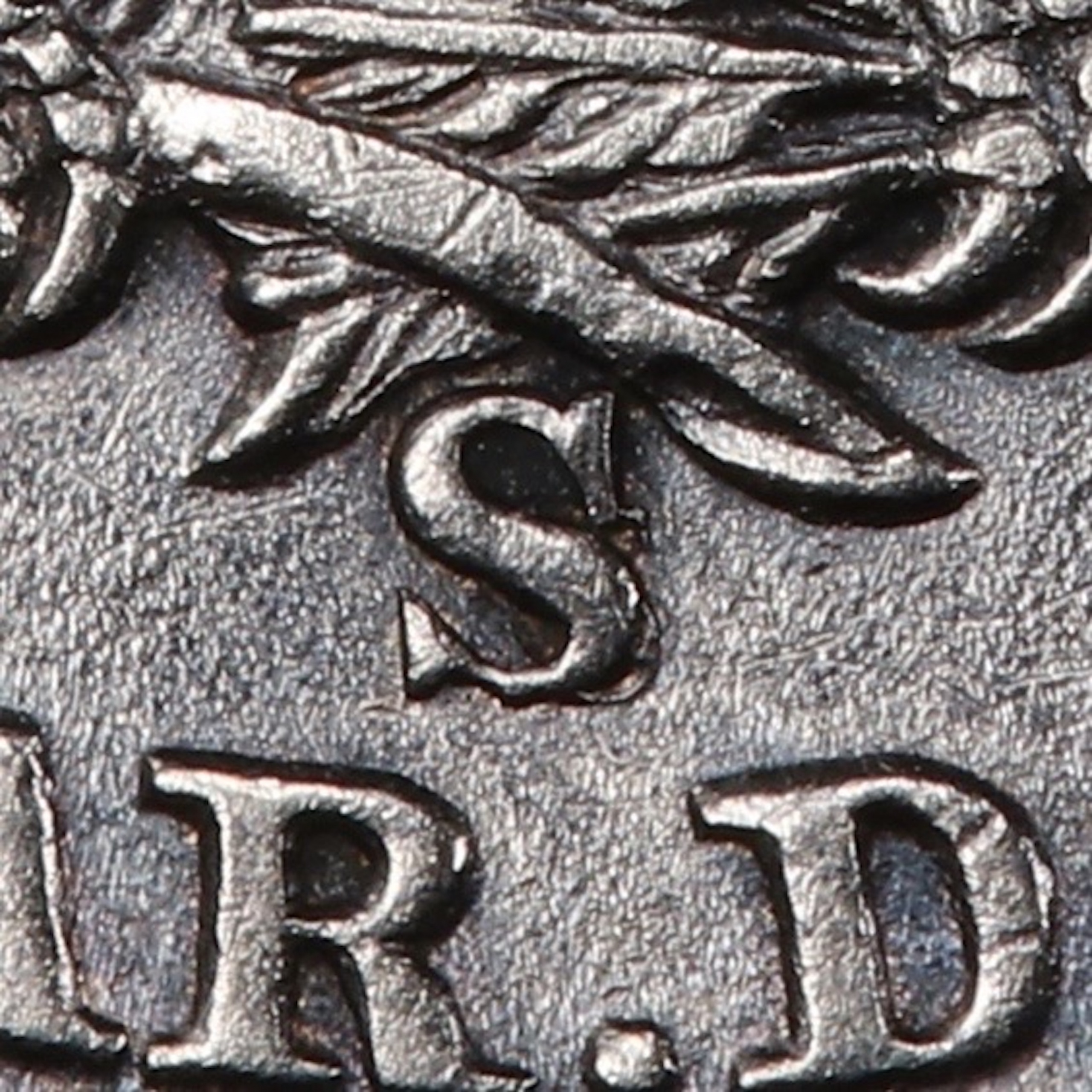 This is a close-up of the large “S” over small “s” mint mark on one of the nine recently discovered 1856-S/s quarters in the historic S.S. Central America treasure. These coins will be offered in public auctions to be conducted by Goldberg Coins and Collectibles. (Image courtesy of Professional Coin Grading Service).

A lengthy, meticulous, coin-by-coin inspection of the treasure began when CGMG took possession of the 2014 recovery in January 2018, and quarter dollars were among the last of the items to be recently examined.

All nine of the 1856-S/s quarters have now been certified by Professional Coin Grading Service (PCGS) and each encapsulated with a pinch of California Gold Rush gold dust recovered from the shipwreck. They will be offered in public auctions by Ira & Larry Goldberg Coins & Collectibles, Inc. beginning with the February 16-20, 2020, Pre-Long Beach Auction in Los Angeles.

With a total mintage of only 286,000, “normal” 1856-S quarter dollars are scarce even in low, circulated grades, and extremely scarce in Mint State grade. Prior to this discovery, PCGS previously certified just 38 examples of the 1856-S/s repunched mint mark, with the majority in only Good to Fine condition and none in Mint State.

These are the grades of the recently certified sunken treasure 1856-S/s quarter dollars: PCGS EF-45; PCGS EF-40; four are graded PCGS VF-35 and another one is PCGS VF-25. Two other coins exhibit environmental damage (PCGS designation 97) and are graded PCGS 97-AU and PCGS 97-EF.

In addition to the large over small mint mark examples, two, rare mint state “normal” 1856-S quarters were discovered in the treasure; one graded PCGS MS-63, the other PCGS MS-62.

“Silver coins that were found in the purser’s bag in a lockbox inside the ship’s safe survived 157 years in the Atlantic Ocean without the corrosion seen on most silver coins found on shipwrecks. This is undoubtedly due to the oxygen-starved (anaerobic) conditions within the safe. It was not water tight, but it essentially sealed off the interior environment and its chemistry from the outside seabed environment,” explained Bob Evans, the chief scientist on the 1980s mission that first located and recovered a portion of the fabulous sunken treasure and who served in that same role and as a numismatist with the 2014 recovery.

Evans recently found the two 1856-S and nine 1856-S/s quarters while finishing the coin-by-coin examination of the last portion of the treasure.

“The S.S. Central America has once again revealed another ‘time capsule effect’ of what coins were in daily commerce at the time and on the steamship route between San Francisco and New York via Panama in 1857. It is delightful to see this effect yet again in this treasure, as the contemporary usage and details are revealed to us, as if we are transported back in a time machine,” said Evans.

The S.S. Central America was a 280-foot long, three-masted side-wheel steamship carrying tons of California gold that had been shipped from San Francisco to Panama. She sank off the coast of North Carolina on September 12, 1857, during a hurricane while on the final leg of a voyage from Aspinwall (now Colón), Panama to New York City. The loss of the ship’s gold cargo was a major factor in the economically devastating financial panic of 1857 in the United States.

In a court-approved transaction in November 2017, the California Gold Marketing Group acquired all the treasure recovered in 2014 from Ira Owen Kane, Receiver for Recovery Limited Partnership and Columbus Exploration, LLC. In 1999, CGMG acquired all of the available S.S. Central America treasure that was recovered in the 1980s.