On September 9, 2009 the Austrian Mint issued the final release of the six coin “Austrian Railways” series. The latest 20-euro silver commemorative coin features the railjet and is dedicated to the “Railway of the Future.” 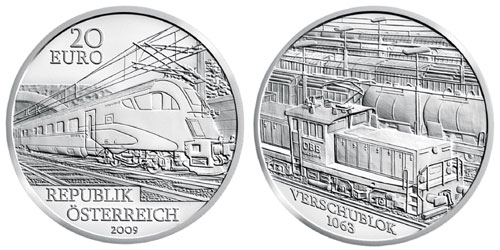 The railjet went into service on Austria’s railways in 2009. It is a 185.5 meter long train drawn by a Taurus-2 locomotive at speeds between 200 and 230 km/h. The railjet can transport over 400 passengers at a time, making it comparable with the high speed AVE (Alta Velocidad Espanola) in Spain and the Eurostar between London and Paris or Brussels.

The obverse of the new Railway of the Future Silver Commemorative Coin features the railjet speeding out of a low tunnel. The reverse of the coin shows a freight yard with heavily loaded cars, tanks and containers, and an electric shunting locomotive in the foreground.

The proof quality coins are stuck in 90% silver and limited to a maximum mintage of 50,000. Each coin comes in an attractive box with a numbered certificate of authenticity.