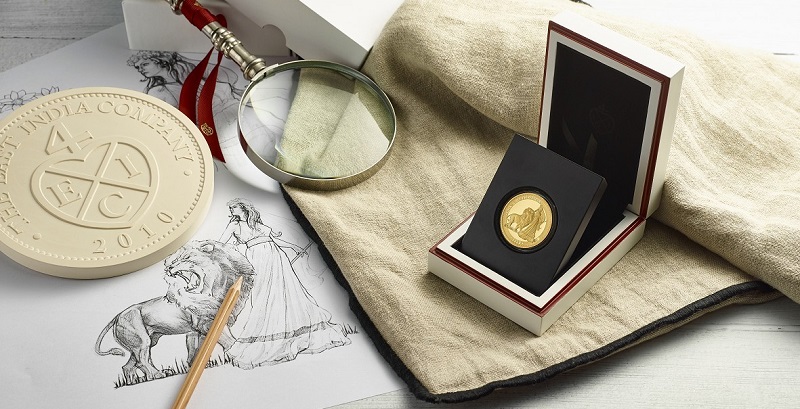 In November 2019, the East India Company Bullion (EIC), in association with the South Pacific island country of Niue, launched a collector’s set of gold coins which featured a new interpretation of Una and the Lion. The EIC also announced the set was the first of a new annual series that would feature different depictions of one of the world’s most admired and sought after numismatic gems.

Michael Alexander of the London Banknote and Monetary Research Centre took the opportunity to speak to Glyn Davies, the coin series’ designer, who discusses his inspiration for this design and what projects he is most proud of, which were commissioned during his distinguished career in graphics. 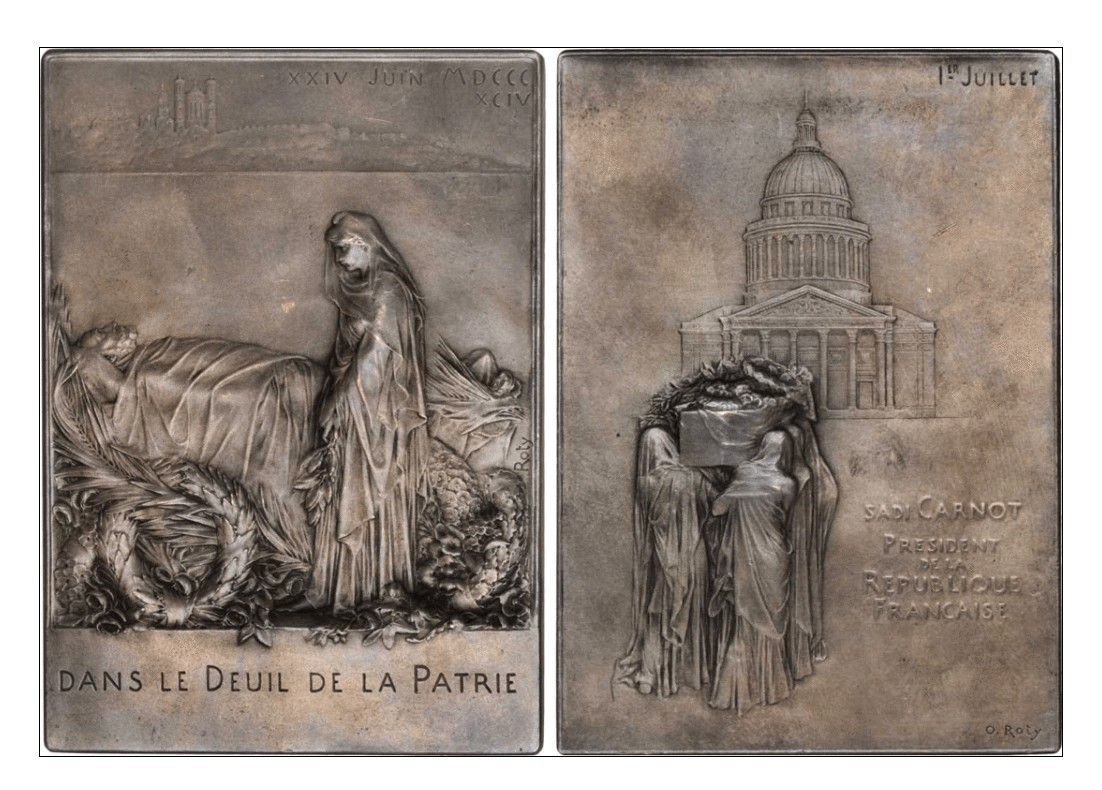 The launch of the Una and the Lion collector series coincided with the bicentenary anniversary year of the birth of Queen Victoria, and, of course, the theme was inspired by her accession in 1837, as well as the spectacular coronation that followed in 1838. In 1839, on the occasion of the first anniversary of the young Queen’s coronation, a beautiful gold crown coin was issued depicting a rendition of Edmund Spenser’s epic poem entitled The Faerie Queene, first published in 1590 during the reign of Queen Elizabeth I. Designed by famed medallist and engraver William Wyon (1795–1851), he delicately illustrated Una as the young Queen who guides the lion — a symbol of Britain. This coin is distinguished as having been Britain’s first commemorative crown coin, though it was never meant for circulation.

Upon the new, young Queen’s accession, a series of coins intended for circulation were begun in earnest and would include that special £5 gold piece created to mark the Queen’s coronation as well as smaller gold, silver, and copper definitive pieces. The first effigy seen on the obverse side of the coins of Queen Victoria was introduced in 1838 and also created by William Wyon, chief engraver at The Royal Mint. She is depicted as the 18-year-old young lady she was at the time of her accession: Uncrowned, facing to the left, and shown with a ribbon in her hair, which is tied back with a slight curl.

Today, Queen Victoria’s name is synonymous with an incredible era. British industrialisation was at its peak, British technological and engineering discoveries were the envy of the world, Britannia truly ruled the waves, and the sun literally never set on the British Empire. These were just a few attributes of the times and accomplishments made during the long reign of one of the world’s most recognisable figures of the 19th century.

The reign of King George III, on the British throne since 1760, was nearing to a close by the second decade of the 1800s. A crisis of succession had been created by this time, as the heiress to the Prince Regent had died in 1817 during childbirth with her first pregnancy. Had this crisis not been created, it is likely that the little princess would never have been born and the course of the British monarchy would be quite different today.

Born to Edward Augustus (1767–1820) Duke of Kent, on the 29th May 1818, she was given the name Alexandrina Victoria. As a Princess of Kent, she was immediately fourth in the line of succession to the British throne after her elder uncles the Prince-Regent, the Duke of Clarence, the Duke of Albany, and her father. Sadly, just eight months after her birth, her father died, and she became third in line to succeed. 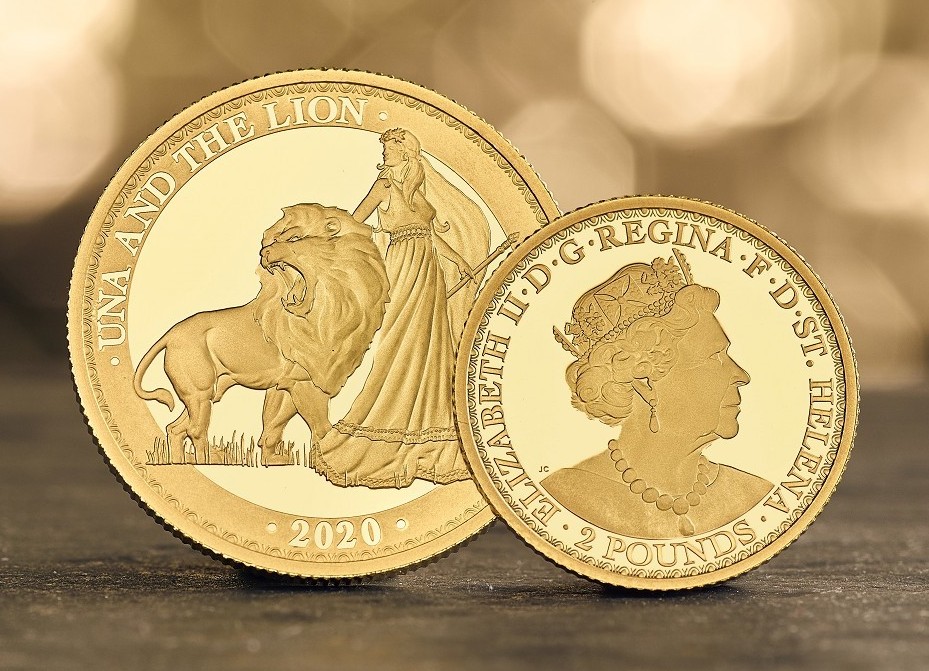 On the morning of the 20th June 1837, the 18-year-old Princess of Kent was awakened at Kensington Palace to learn her beloved uncle had passed away and she was now Queen. First, as the new sovereign, it was necessary to confirm or declare what she would be called, and surprisingly, she chose her second name of “Victoria” rather than her first. From that day, the Victorian Era was born, which would last more than six decades and give the world a chapter of history that would be unmatched in terms of propelling a nation forward at a pace it had ever known before. Queen Victoria would reign a total of 63 years and would be remembered as the longest-serving sovereign, that is until her great, great-granddaughter, Queen Elizabeth II, surpassed this distinction on the 10th September 2015. The first set of 2020-dated gold coins consists of three sizes, which are all struck in Proof quality. The reverse side is designed by well-known artist Glyn Davies, who has been designing coins since 2013, and comes from a background in animation and graphics.

Michael Alexander: Una and the Lion are perhaps one of the most enduring and iconic reverse designs ever seen on a British coin and your interpretation of this extraordinary theme is wonderful. I’d like to ask, what is the one thing or perhaps more than one element of that design which either inspired your own design or is just one thing that sets Una and the Lion apart of any other numismatic design?

Glyn Davies: In the original design by William Wyon, the Lion is being led by Queen Victoria, reflecting a certain balance of power — a queen leading her empire. Creating a new Una and the lion design based on the epic tale, I felt it was important to find the same balance and tone.

While it is Una’s beauty that tames the lion, it is her ability to remain steadfast and true to her cause that reflects her as a woman of endurance and strength. My objective was to balance Una’s beauty with her strength in the design. I imagine her to have a quiet, subtle, understated strength which inspires not just the lion to protect her fiercely, but also St. George to slay the dragon.

MA: 2019 was an important year in terms of the royal calendar as it was the bicentenary of the birth of Queen Victoria and it is also 180 years since the minting of this coin. Are there any particular coins from Victoria’s long reign that have especially gained your attention as someone who has designed a new series of Una and the Lion yourself?

GD: The 1897 Queen Victoria Diamond Jubilee medal designed by George William de Saulles is one that catches my attention, the reverse includes Queen Victoria’s effigy designed by William Wyon, the design and modelling look effortless, I think there’s a lot to learn from form this medal.

I also have a fondness for French medal and coin design and there a few that I like, but the “The Body of the President Sadi Carnot” by Louis Oscar Roty is the design I always look at with fondness as that was the hook that made me look at coin design in a new light. The depth and distance created in the relief, the figures shrouded almost in mist, and the respect for the subject matter.

MA: You mention your fondness for French medal and coin design and Louis Oscar Roty was certainly a favourite of mine as well as a coin collector. I’d like to learn more about your career in coin design, with the French medals being what prompted you in this direction, what was the first coin or medal you either designed or worked on?

GD: I started as a coin designer about seven years ago, moving from a background in animation and illustration. I came from a naïveté in coin design with no preconceptions. My first design was a medal depicting an Okapi for The Zoological Society in 2013. I still think it’s probably one of my best designs.

My Remembrance commemorative £5 coin of 2015, is particularly personal to me because I used the flowers from my mother’s fields that surrounded her home, I think this gave me greater understanding of loss and passing. It wasn’t my first choice for submission I guess somebody like it enough to choose it above my other concepts.

MA: I’m always curious about the process of coin design and those who have influenced many of today’s engravers and artisans. Do you have a specific artist whom you gain inspiration from, one who has been involved with coinage or medals, perhaps someone whose work has never appeared on coins, and, if so, who is that artist?

GD: I’ve no single inspirational artist, although I do like Raphael Maklouf’s story and his approach. He always says it as it is, which is rare and really appreciated. I did a portrait design of a certain male personality for him a few months ago, and he asked me who the lady was, he made me laugh and take a step back and look again. Sometimes you need that grounding and honesty, but it would be nice to have an ounce of his talent!

I suppose my background in illustration and animation draws me naturally to artists such as Victorian Arthur Rackham and Alfred Bestall, writer and illustrator of Rupert the Bear. Their illustrations have such a great sense of joy and wonder about them. American illustrator Norman Rockwell’s ability to ignite your emotions and pull you into his prolific drawings and subject matter is another.

The position of coin designer came about, and I was looking for a change and getting back to using a pencil and some drawing skills again. So I jumped at the chance, and seven years later, I’m still excited by the challenges of a new project at the Tower Mint, and I’m learning all the time.

MA: I’m familiar with several projects of yours and admire many of them, a few of your designs have found their way into my own crown coin collection. Can you tell my readers which project you’re especially proud of and why?

GD: I’m proud of all my designs to some extent, but naturally, like most artists, I am my biggest critic. Perhaps my portrait of Prince Charles is one of my proudest achievements at the moment. It was my most accomplished accurate depiction for an RMAC competition but wasn’t apparently liked. I believe it was originally intended to celebrate his 70th birthday, it was never manufactured, but I do have a 110-millimetre toned brass medal that’s just sitting on my shelf, which I should probably do something with.

MA: Glyn Davies, thank you for your time today.

The 2020-dated gold Una and the Lion coins are available as one-ounce, 1/4-ounce, and 1/2-gram individual purchases and as a three-coin set. For additional information, please visit the website of the East India Company Bullion Ltd.

Interested collectors can call 44 (0) 203 205 3380 to order directly from the East India Company or visit their flagship retail location in London at 7-8 Conduit Street, W1S 2XF.