The Perth Mint of Australia has recently released separate gold and silver coins which mark the 60th anniversary of the coronation of Queen Elizabeth II. Her Majesty ascended the throne on February 6, 1952 and was crowned Queen Elizabeth II on June 2, 1953. 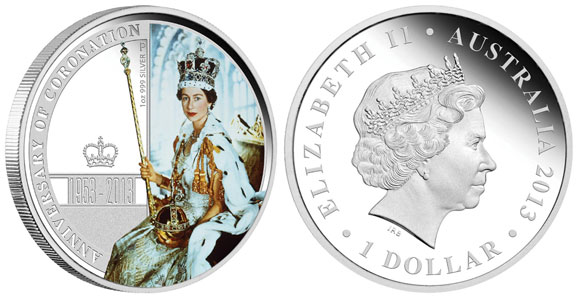 The proof quality 1 oz 99.9% pure silver coin features Sir Cecil Beaton’s official Coronation portrait in color. The Queen wears the Imperial State Crown and holds the Royal regalia incorporating the Sovereign’s scepter-with-cross and the Sovereign’s orb.  On her right hand is the Coronation ring, and on both wrists are golden armills. Inscriptions include “Anniversary of the Coronation” and the dates “1953-2013”.

This coin carries a maximum mintage of 7,500 pieces and no more than 5,000 will be released in the current packaging option. Each coin is housed in a display case with illustrated shipper and accompanied by a numbered certificate of authenticity. 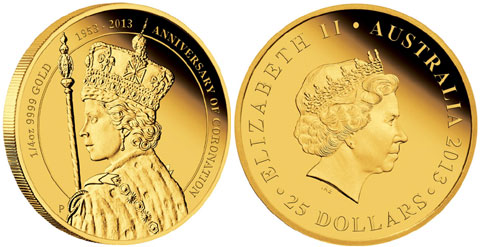 The proof quality 1/4 oz. 99.99% pure gold coin features a struck impression of Queen Elizabeth II in ceremonial regalia, captured by Sir Cecil Beaton. An outer ring of text includes the weight and purity of the coin, “1953-2013” and “Anniversary of Coronation”.

This release carries a limited mintage of only 1,000 pieces. Each coin is housed in a display case with illustrated shipper and numbered certificate of authenticity.

To place an order for these or other UK themed coins, please visit this section of the Perth Mint website.