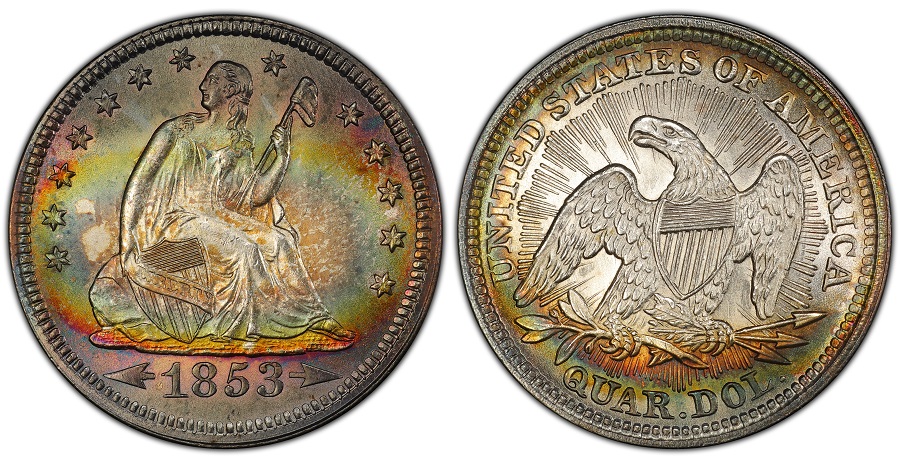 Q: I have noticed that some 1853 quarters are different from all other Liberty Seated quarters, in that there are arrows by the date on the obverse and rays radiating around the eagle on the reverse. The latter feature makes for a very unusual and attractive design. Why was it not continued?

A: The arrows and rays were added to the design of the quarter in 1853 to denote a decrease in the weight of the quarter from 103.5 grains to 96 grains. This change was made subsequent to the enactment of February 21, 1853, legislation, prior to which a relatively small quantity of 44,200 quarters had been minted for circulation to the old Philadelphia Mint standard; subsequently, more than 15.2 million were struck to the new standard at the Philadelphia Mint and 1.3 million at the New Orleans Mint. This law made half-dimes, dimes, quarters, and halves all subsidiary to the silver dollar; that is, they were now proportionally lighter in weight, thus intrinsically worth less than their face value. While the rays were incorporated on the reverse of the quarter only in 1853—halves were similarly treated that year as well—the arrows remained beside the date on the quarters of 1854 and 1855 as well. While this was the only appearance of rays on the reverse of Liberty Seated quarters, the arrows beside the date were again employed in 1873 and 1874, that time to denote a slight increase in weight to 96.45 grains.