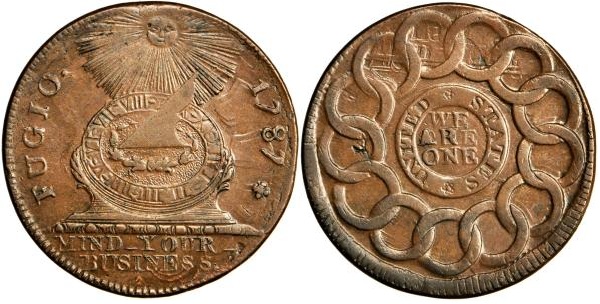 Q:  What was the first coin to be issued by authority of the United States and when was it issued?

A:  Commerce was plagued by a flow of underweight state coppers and forgeries of English coppers in the years immediately following the American Revolution. The “Fugio” cent was authorized by Congress on April 21, 1787, in an effort to remedy this frustrating economic situation. Congress directed that the coins bear a representation of a sundial, the date 1787, FUGIO (“time flies”), and the motto MIND YOUR BUSINESS on the obverse, with 13 linked circles and the motto WE ARE ONE on the reverse. Since the incorporation of these mottos often is attributed to Benjamin Franklin’s suggestion, the coins are sometimes referred to as Franklin cents.

As the United States did not have a mint in 1787, a contract for the striking of 300 tons of Fugio coppers was awarded to New Haven’s James Jarvis, part owner of a company that had coined coppers for the state of Connecticut. Most of the 400,000 Fugio coppers struck were produced in early 1788 — with the copper being salvaged from bands that had held together the powder kegs sent to America by the French — after which Jarvis defaulted on his contract.