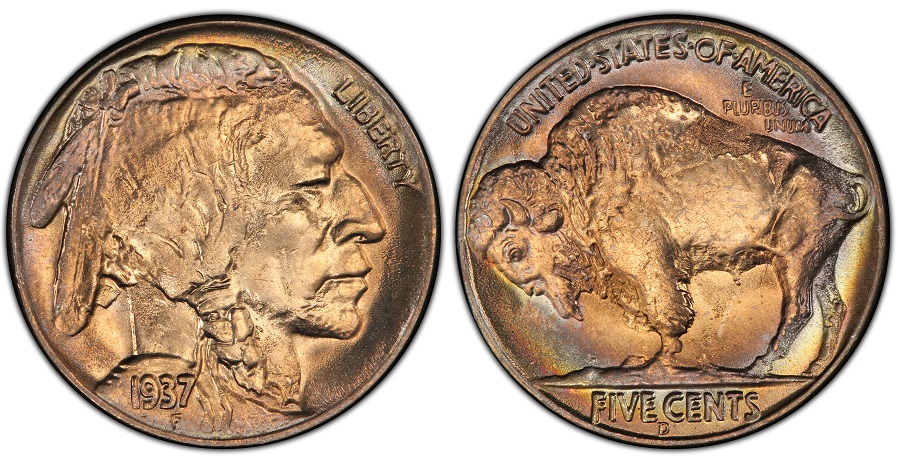 Q: Can you tell me what is meant by a “Three-legged Buffalo?”

A: This term is used to describe a major error occurring on certain 1937-D nickels wherein the midsection of the buffalo’s right foreleg is missing. It is believed that the error resulted when the die was ground down to remove disfiguring marks that resulted when the reverse die accidentally clashed with an obverse die when the press closed without a nickel blank in the coining cavity. A similar, but somewhat less valuable “3-1/2 legged” 1936-D Buffalo also exists. In the case of the 1937-D, regular nickels of that date and mint have been altered to simulate this prized error. The genuine and spurious errors can be distinguished by the fact that on genuine specimens a line of tiny, rough dots in a gentle crescent extends from the belly of the buffalo to the ground. Also, the hoof of the missing leg must be visible on genuine specimens, while altered specimens frequently exhibit an abrupt clean severance line and no hoof.

Q: What is considered to be the most improbable example of a multiple major error coin?

A: A double-dated coin would certainly be one candidate for this honor. In 1900, a properly struck 1899-dated Indian Head cent was channeled back into the coining process and fed into the coin press, resulting in an upside-down, half-off center restrike bearing two different dates! Was this an accident? We’ll never know, but such a coin is highly valued regardless of the suspicions about its origins.