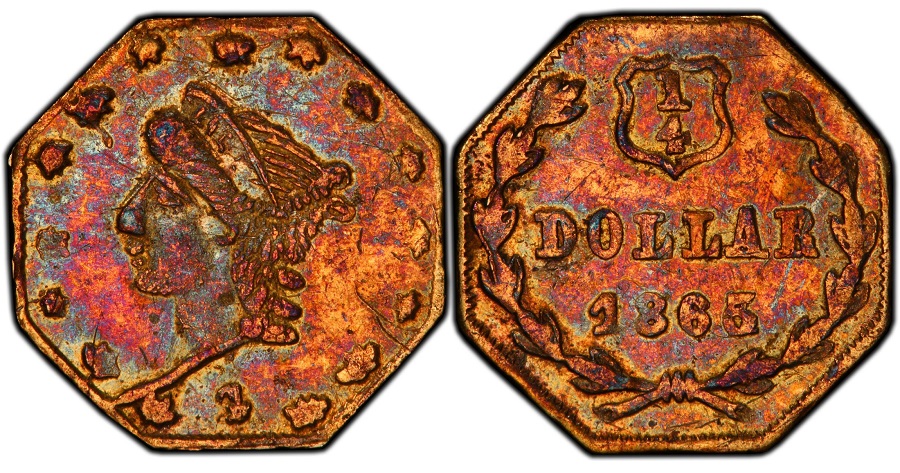 A: California fractional gold pieces are gold coins of small denomination issued by jewelers, engravers, and goldsmiths to satisfy a need for small change that developed in California during the Gold Rush days. These tiny gold pieces were issued in denominations of quarter dollar, half dollar, and one dollar from 1852 to 1882, in both round and octagonal form. Genuine fractional gold pieces generally have a Liberty Head, Indian Head, or Washington Head represented on the obverse; a wreath or beaded circle on the reverse, or eagles on a couple of the half dollar issues. The “coin” issues were minted of gold, but invariably under weight, most being denominated and dated. While the Coinage Act of April 22, 1864, outlawed such private issues, that law was not sternly enforced until 1883. Commencing in the 1870s souvenir “token” issues were produced, most of which were of low gold content or gold plated and not denominated. In circumvention of the law many of the “token” issues from the 1880s on were backdated to the 1850s and 1860s.

Q: Is there an easy way to tell the difference between a genuine California fractional gold piece and a California token or souvenir?

A: Genuine pieces must bear an actual denominational value reference stated as CENTS, DOL., DOLL., or DOLLAR. An 1882 law provided that the word “dollar” could not be used on any gold piece other than issues of the U.S. Mint. Imitation souvenir tokens made after that date and back-dated to the 1850s and 1860s usually state the value numerically as 1/4, 1/2, or 1, without the word dollar, to avoid the legal requirements prohibiting any form of the word dollar, even though the imitation pieces, not being reproductions of government issues, could not legally be considered counterfeits. Some of the “tokens” made immediately after 1882 were of reasonably good gold and weight, but this does not make them genuine fractional pieces. Pieces carrying only the numeric designations of value are must less valuable than those with the denomination spelled out in full or abbreviated. Souvenir issues of more recent vintage, frequently representing a bear on the reverse, are usually made of gold-plated brass, and have little numismatic value.

Q&A: Is any particular course available to teach me the “know-how” of coin collecting?