Periodically, Coin Update runs a Q&A from Clifford Mishler’s Coins: Questions & Answers, 5th edition. Since the U.S. Mint is ringing in the new year with the 2017 America the Beautiful Quarters Proof Set (17AP, available for purchase as of noon today), we thought it would be interesting to post several questions on the topic. Happy New Year! 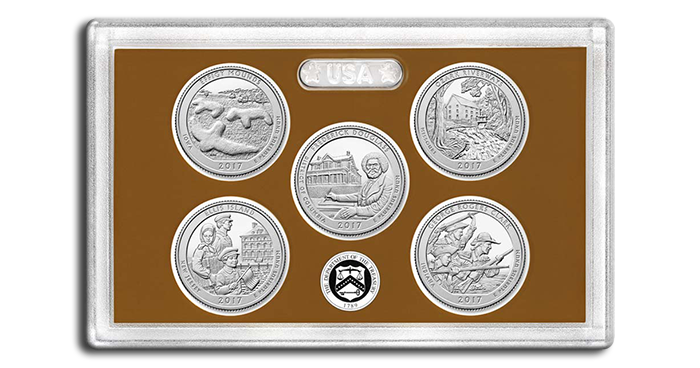 Q.  What are Proof coins and sets?

A.  The term “Proof” refers to the method of manufacturing a coin, not to its condition. Originally, Proof coins were struck for presentation, souvenir, exhibition, and display purposes. They are now, commencing in 1936 and continuously since then with the exception of the years 1965 to 1967, produced principally for sale to collectors who desire the finest possible specimens of the nation’s current coinage.

Ideally, the Proof coin is minted with a maximum of preparation and care, using highly polished dies and planchets free of imperfections. Each coin is multiple-struck at slow speed with extra pressure to bring up sharp, high-relief details. Proofs are distinguished by their brilliant mirror finish, sometimes with frosted highlights, and high-relief rims; since 1968 they bear “S” or “W” mintmarks as appropriate.

Proof sets of current U.S. circulating coinage are produced annually at the San Francisco Mint. Each set issued commencing in 2000 has consisted of one example of each current circulation denomination (presently 1¢, 5¢, 10¢, 25¢, 50¢, and $1; Proof 1999 Anthony dollars were struck, but not included in 1999 Proof sets; the dollar has been included beginning in 2000 with the introduction of the Sacagawea issue), all bearing the “S” mintmark. Each annual five-coin 50 State Quarters® Program series has also been offered as a separate Proof set. [Editor’s note—Obviously, this would be the “America the Beautiful Quarters Program,” if the book were reprinted today.]

Sets of various descriptions have been produced in recent years, commencing in 1983. Since the introduction of the statehood-quarter series in 1999, the variations have ranged from 10- or 11-coin sets representing all of the coins released to circulation, to similar sets bearing the dime, half dollar, and five quarters in silver. Issue prices have ranged from $13.95 (five-piece quarter set, face value $1.25) to $37.95 (11-piece silver sets of 2004 and 2005, each including the five statehood quarters and two nickels of that year; face value $2.96). The five-coin sets available from 1950 through 1964 were priced at $2.10 each (91¢ face value); the price of annual sets did not reach the $10 level until 1980.

Q.  What is the difference between a Proof set and a Mint set?

A.  A Proof set consists of specially manufactured specimen coins of brilliant finish, high relief, and exquisite detail. A Mint set consists of Uncirculated coins issued annually by the U.S. Mint, assembled from select early strikes. Presently these sets consist of one coin of each denomination struck for circulation at the Philadelphia and Denver mints: two each of the 1¢, 5¢, 10¢, 50¢, and $1 coins, along with ten 25¢ coins (except in 2004 and 2005, when there were four 5¢ coins). 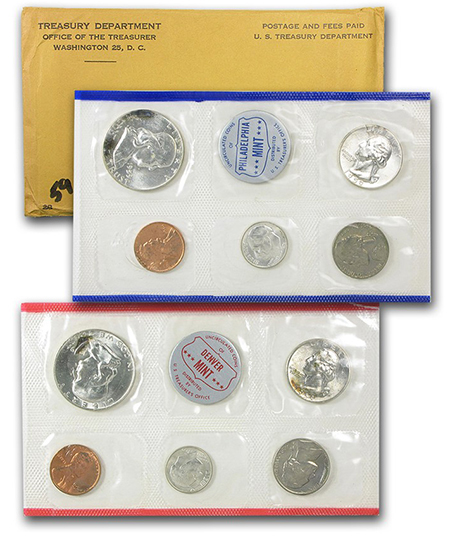 A 1959 Mint Set with its P- and D-Mint coins and original packaging.

Q.  What does the term “Mint-sealed Proof set” mean?

A.  During the early 1960s, a “Mint-sealed Proof set” was, in practice, considered to be one still sealed in the original brown craft envelope in which it came from the U.S. Mint. These sets were bought and sold by an incomparable act of faith, with no one actually knowing the contents of the envelope, or its condition. Later this practice was modified to the more logical insistence that the Proof set still be sealed within the polyethylene-coated cellophane package (“flat pack”) enclosed in the envelope, as employed starting in 1955 and continuing through 1964. Today the sets are sonically sealed in a rigid plastic case that can also serve as a display package. Prior to mid-1955, Proof coins were individually packaged in cellophane or polyethylene coin envelopes, and these were packaged in a small, postal-tape-sealed box (“box pack”) for shipment, the boxes being a uniform 2-3/8 inches square beginning in 1950. 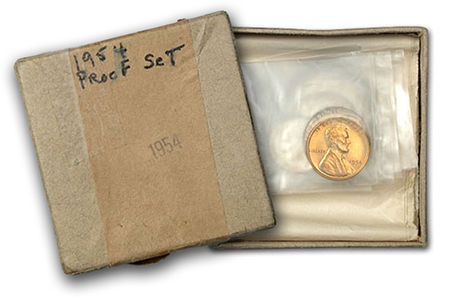 A 1954 Proof Set in its original box, with owner’s writing on the lid.

A.  In the generally accepted application of the term, Frosted Proofs have a brilliant, mirror-like field (often referred to as “cameo” in today’s marketplace) with contrasting dull or “frosted” surfaces on the raised design and lettering elements. When the dies for manufacturing these coins were created, only the raised surfaces (which would become the recessed fields of the coins) were polished, resulting in the frosted appearance of the raised design elements. 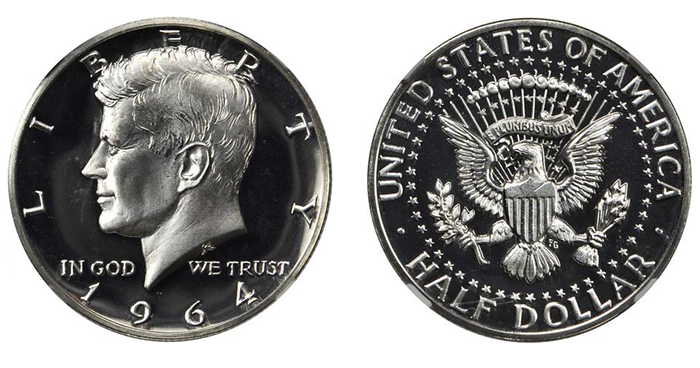 From 1936 to 1977/78, Proof set production was executed to the “brilliant” standard; that is, all surfaces were brilliant and mirror-like both in the field and on the raised surfaces. Early strikes from die sets created for this production had a frosted appearance on the raised design and lettering, but the die surfaces were soon polished by the striking process. Coins evidencing the frosted cameo features generally command a premium. Commencing in 1977/78, Proof set production was performed to the frosted standard, with the raised surfaces and lettering on dies being chromium plate–treated to maintain the frosted appearance for extended production runs.

Proofs can also be produced with the frosted surfaces reversed, meaning that the fields appear frosted while the design and lettering elements are brilliant. Similarly, they can also be made with all surfaces frosted.

A.  Special Mint Sets of U.S. coins were issued by the Treasury Department for the years 1965, 1966, and 1967 in lieu of Proof sets and regular Mint sets (the offerings of which were discontinued due to the coin shortage of 1964). These sets included one coin of each denomination, cent through half dollar, and carried no mintmark. They were struck one at a time from specially selected but unpolished blanks, on high-tonnage presses using polished dies, and handled individually after striking. They have better detail in the relief than regular coins, and a better appearance than the uncirculated coins contained in regular Mint sets of 1964 and earlier and of 1968 and later, with some specimens displaying “frosted” or “cameo” design features. The 1965 sets were housed in vinyl packets similar to those employed for Proof sets from 1955 to 1964; those of 1966 and 1967 were contained in special plastic holders. They sold for $4 per set. 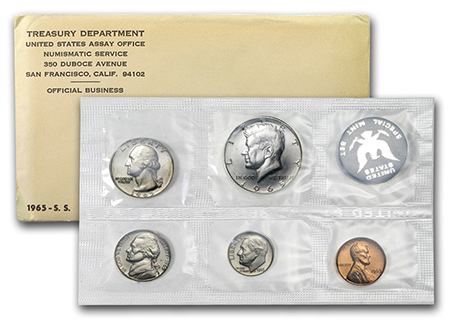 A 1965 Special Mint Set in its original Mint packaging. 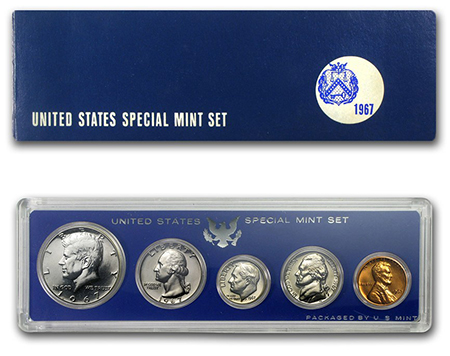 A 1967 Special Mint Set, in its original, updated Mint packaging.