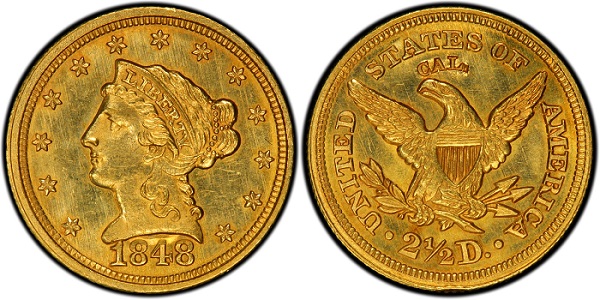 Q:  Is the 1848 gold quarter eagle that has CAL. punched in the field above the eagle on the reverse a private or territorial gold issue?

A:  Although the story of this unusual, and unusually valuable, gold piece is part of the history of the territory of California, it is an official coin of the United States that was struck at the Philadelphia Mint. California was not yet a state when Military Governor Colonel Richard B. Mason collected 230 ounces of gold gleaned from early recoveries of the California Gold Rush, believing this tangible evidence of the wealth of the territory would add impetus to the movement for statehood, sending it to Washington by military courier.

The courier carried the gold to Washington by way of Peru, Panama, Jamaica, and New Orleans, delivering it to Secretary of War W. L. Marcy. Marcy sent it on to the mint at Philadelphia, suggesting that a portion of it be reserved for medals, and that the balance “be used in striking quarter-eagles bearing a distinguishing mark” to identify the content as being a part of the first shipment to the East from California’s gold discovery.

Mint Director R.M. Patterson struck 1,389 quarter eagles from the gold, and to distinguish them from regular issues had “CAL.” hand stamped above the eagle. Although struck using an 1848 dated die pair, these coins were likely struck in early 1849, as Mason’s gold dispatch did not go forth until December 9, 1848, although the original California gold discovery was made on January 24, 1848, when John Sutter made his discovery at Sutter’s Mill on the American River. These coins from the gold discovery that ushered California into the Union have a distinctive brassy color imparted by the high silver content of California gold, with several specimens being possessed of prooflike surfaces.