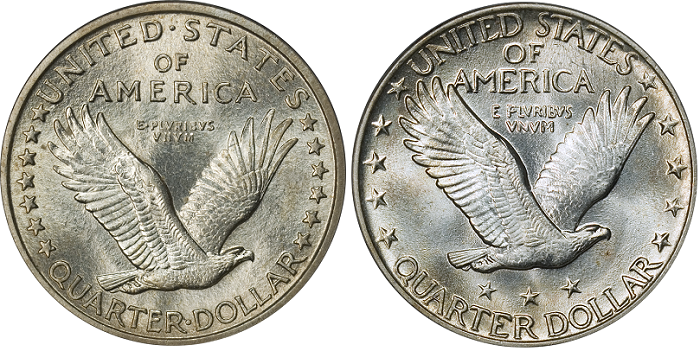 Q:  Who was the model for the Standing Liberty depicted on Hermon MacNeil’s beautiful quarter?

A:  MacNeil acknowledged that his rendition of a standing or striding armed Liberty was inspired by Roty’s early 20th century “sowing Marianne” of the French silver coinage. The actual model was 22-year-old Miss Dora Doscher (later Mrs. H.W. Baum), who also posed for New York City’s Pulitzer Memorial Fountain and the famous “Diana” that reposes in the Metropolitan Museum of Art, both figures by Karl Bitter.

Q:  Is it true that the Standing Liberty quarters struck from 1917 through 1930 were illegal, or were illegally struck?

A:  That could be said. The authorizing legislation for the Standing Liberty quarter specified: “No change shall be made in the emblems and devices used,” providing only that “the modifications shall consist of the changing of the position of the eagle, the rearrangement of the stars and lettering and a slight concavity given to the surface.” Nevertheless, when variety 1 was supplanted by variety 2 in 1917, it was immediately obvious that substantial unauthorized, therefore illegal, changes had been made to the “emblems and devices” on the obverse, including the “dressing” of Liberty’s breast with “chain-mail.”