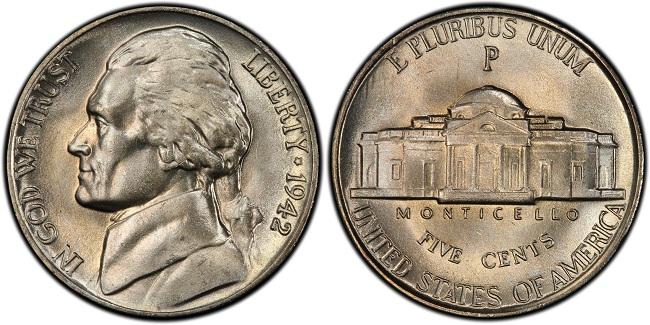 Q: I have some nickels dated 1942, 1943, 1944, and 1945 that appear to be of a much darker color than normal. Each of these coins also has a large letter above the dome of Monticello on the reverse. Are these coins rare?

A: Your coins are not rare, but circulated examples of them are significantly more valuable than most other Jefferson nickels immediately preceding and following them. The reason they are more valuable is that they contain a substantial percentage of silver, the same property that makes them darker in color. Nickels of these years struck with this silver content, in substitution for nickel, are distinguished by the presence of the large letters P, D, or S mint marks over Monticello’s dome on the reverse, this being the only instance when a U.S. coin minted at Philadelphia has carried a mint mark.

Nearly 60 percent of the nickel production of 1942 consisted of coins bearing a 35 percent silver content (0.05626 ounces of silver) and 9 percent manganese in replacement of the 25 percent nickel content utilized from earlier in 1942, back to 1866, silver being less valuable than nickel at the time. The new alloy, which reduced copper content from 75 percent to 56 percent, was then utilized for all nickel coinage for 1943, 1944, and 1945.

This new alloy was arrived at as a technical substitute for the old one, because it created a coin with identical electrical conductivity qualities, which was important for the functioning of vending and slot machines, subway turnstiles, and a host of other devices attuned to weight or magnetism. This change perhaps had more to do with boosting the morale of the public during wartime than the need for nickel for war purposes, as it has been calculated that only a little more than 800 thousand pounds was saved from coinage due to the change, while about 180 million pounds were produced that were available to Allied countries over the same period.

When the bullion value for silver hit the 90-cents-per-ounce range in the early 1960s, these nickels started trading at a premium based on the value of their metal content, and people quickly found it to their advantage to remove them from circulation for recycling as bullion.