The Eisenhower Dollar was struck from 1971 to 1978 and was an issue of firsts and lasts. It was the first dollar struck for circulation that did not contain silver and the last that was still the size of the old silver dollars at 38.1 millimeters. The combination proved unpopular with the public, and circulation of the coins honoring the former General and President was limited, with the majority of pieces kept as souvenirs. Issues were also struck on 40% silver planchets, containing less silver than the original silver dollars, as well as Proofs struck from polished dies on polished planchets meant exclusively for collectors. Both of these issues were sold at a premium over their face value, distributed in various forms, including blue packs (uncirculated 40% silver) and brown packs (proof 40% silver) as well as the regular mint and proof sets. 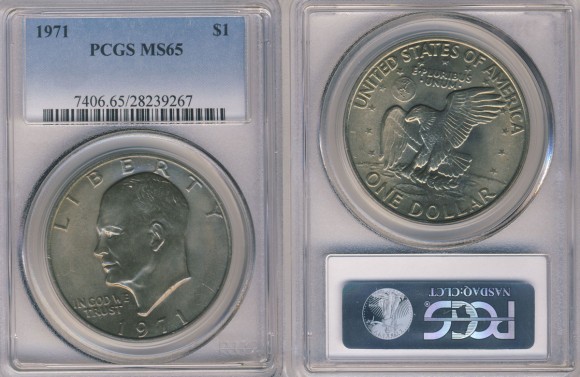 During the eight years that the Eisenhower Dollar was struck, a total of 19 uncirculated issues were released as well as 10 different Proof issues (struck on both copper-nickel planchets as well as the 40% silver planchets). This makes it one of the more easily completed sets, and complete collections in albums can be purchased through retail outlets and on the internet for about $200 a set for uncirculated coins. It becomes a completely different story when high-grade coins certified by PCGS are sought after, as some dates are notoriously difficult to find in gem uncirculated or better condition.

The first problem that specialized collector pursuing a high-grade set (in this article we will limit ourselves to the mint state coins, as only in PR-70DCAM the proofs are rare) is the fact that the mint had very little experience striking large coins on copper-nickel planchets in the early 1970s. Up to that point most coins had been struck on silver planchets, which are softer, and copper-nickel coins were not introduced until 1965. In fact, only the dime and quarter were struck on copper-nickel planchets until 1970, as half dollars continued to be struck on silver planchets (albeit 40% silver), but the Mint did switch to copper-nickel half dollars in 1971, the same year the Eisenhower Dollar was introduced.

One problem the Mint had with the Eisenhower Dollars was that it was very difficult to strike the coins fully up. As a result many lack definition in the central parts. Additionally, the relief of the coin was very low, making the surfaces prone to bagmarks acquired in transport when coins would bang into each other. The fact that the coins weighed quite a bit certainly did not help the situation either. The common Eisenhower Dollar, even in uncirculated condition, tends to show heavy marks and scratches that were acquired in this process.

The first two years are notoriously difficult to acquire in gem uncirculated or better condition. One of the reasons is that the Mint decided not to include Eisenhower Dollars in the Mint Sets of those years. Even though they are not perfect by any means, Mint set coins do tend to be handled less than coins meant for regular circulation resulting in generally better quality coins. Since neither the 1971 nor 1972 Mint Set contained Eisenhower Dollars, collectors had to rely on banks to get uncirculated coins. By the time they reached the banks, however, they had traversed the country (mostly on trains), and bagmarks are a very common occurrence. In MS-65 the Philadelphia issue from 1971 is very difficult, and it is almost impossible in MS-66, with perhaps only a few hundred that can possibly exist. The Denver issue is a little more available in MS-66, although it’s not easy at all. PCGS has graded approximately 20 1971-D’s in MS-67, and the last of those sold for more than $5,500 in January of 2014. 1972 shares a similar story, although attention is often drawn away by the fact that there are three different reverse varieties for the Philadelphia issue, none of which are easy in MS-65 or better. The 1972-D is a true rarity certified in MS-67, with a mere six pieces extant at that grade level with none better. 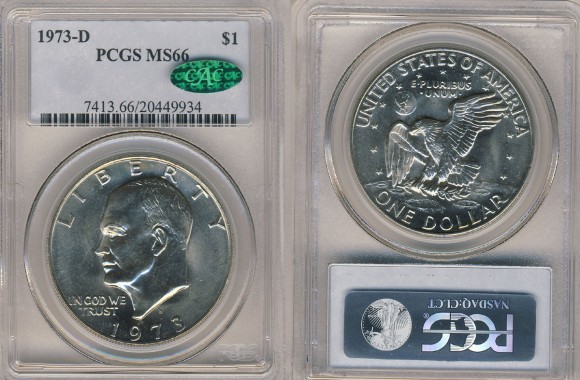 Finally, in 1973 did the Mint start to include Eisenhower Dollars in Mint Sets, and the situation gets a little better for quality conscious collectors. From that year on the quality of Eisenhower Dollars that are available tend to improve, although true high grade examples remain rare for all subsequent years. Generally speaking the Denver Mint issues are easier to acquire in MS-66 or better, although none are particularly easy at that level, an anything finer remains a true modern rarity. 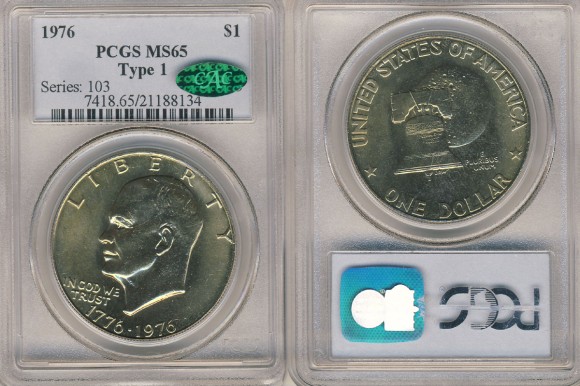 One year that does stand out in terms of rarity in MS-66 is 1976, the bicentennial year, with the Type 1 reverse. The modified reverse design proved prone to bagmarks, and even though the coins are among the most plentiful coins in existence (this is true for the bicentennial quarter and half dollar as well) especially the Philadelphia issue is virtually impossible to acquire in MS-66. The Denver issue once again is a little bit better, but despite mintages in the hundreds of millions both these issues are surprisingly difficult to find at the higher grade levels. 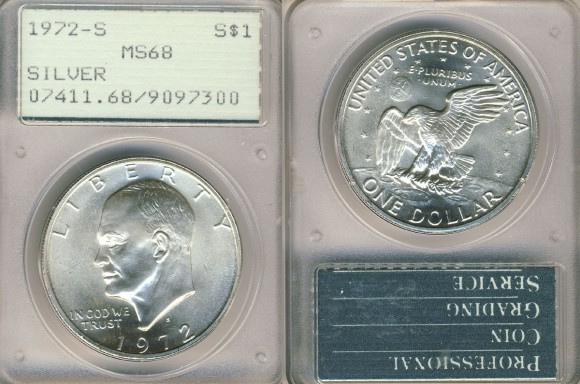 The 40% silver issue are a different story. Struck at the San Francisco mint, they were distributed in blue envelopes, containing the coin in a plastic sleeve together with a blue token. Most issues are available in MS-68, and some have even been certified in as high as MS-69. The notable exception, however, is the 1971-S issue. Known to be notably weakly struck, the coins were handled quite roughly at the Mint, and even MS-65s are not that easy to come by. The plastic in which this issue was packed in tends to detoriate over time, and virtually all that remain in these bluepacks will show various degrees of yellowish toning. Paired with the bagmarks they are often very ugly, and finding mark-free coins without this toning is very difficult. In MS-68, PCGS has only certified two examples, and they have not graded one at that grade level for quite a few years now.

This article is just a brief introduction to the Eisenhower Dollar series in the highest grades. While pursuing these coins may not be for everyone, collectors should realize that populations are very low in the high grades, despite plenty of coins having been submitted to PCGS for grading (as well as the other grading companies). With many people that remember President Eisenhower as well as the release dollars struck in his honor now collecting coins and having the discretionary income to do so, it should not be surprising that interest in this series has been steadily increasing, and we should see even more people pursuing this short and interesting series in the finest grades.