The proof version of the 2010 Boy Scouts of America Centennial Silver Dollar has officially sold out at the United States Mint. The coins were issued to mark the 100th anniversary of the founding of the organization. 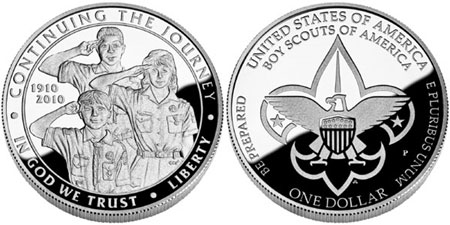 Boy Scouts Silver Dollars originally went on sale March 23, 2010 with proof coins initially priced at $39.95 and uncirculated coins priced at $33.95. Due to the relatively low maximum authorized mintage of 350,000 coins, a sell out was widely expected.

The uncirculated version of the coin officially sold out on April 29, 2010. Unrestricted sales of the proof version of the coin continued until June 18, 2010. On that date, the US Mint indicated that they had received orders sufficient to meet the maximum limit. They did continue accepting orders for placement on a waiting list, which would be fulfilled in the event or order cancellations. Orders continued to be accepted for the waiting list until yesterday August 4, 2010.

Final sales figures for the 2010 Boy Scout Silver Dollars indicate sales of 105,000 of the uncirculated version of the coin and 245,000 of the proof version.