A release date for the collectible proof version of the 2010 American Platinum Eagle has recently been established by the United States Mint. This coin will feature the second in a series of six different reverse designs which explore the core concepts of American democracy as found in the Preamble to the Constitution.

The projected release date for the coin has been set at August 12, 2010, although it remains subject to potential change. 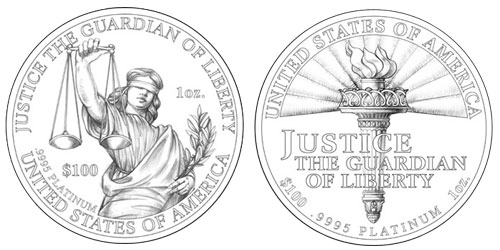 Despite setting a release date, the final design for the 2010 Proof Platinum Eagle has still not been announced. This year’s design will be based on the theme “To Establish Justice,” as inspired by a narrative written by John G. Roberts, Chief Justice of the United States of America.

Nine different design candidates were previously presented to the Commission of Fine Arts (CFA) and the Citizens Coinage Advisory Committee (CCAC) for review and comment. The CFA had favored a design depicting the torch of Liberty, while the CCAC preferred a depiction of blindfolded Justice holding scales and an olive branch. Both bodies recommended slight changes to the wording or design elements for their favored design. The final design selection will be made by the United States Treasury Secretary.

The 2009 Proof Platinum Eagle featured a reverse design based on the theme “A More Perfect Union”. Four faces of diversity were depicted with hair and clothing intertwined. The one ounce platinum coins were priced at $1,792 each and carried a maximum authorized mintage of 8,000 coins. The entire amount sold out after only one week of availability.

The maximum mintage for the 2010 Proof Platinum Eagle has not yet been announced. The pricing will be determined based primarily on the average price of platinum for the weekly period prior to release.