The Fabrica Nacional de Moneda y Timbre in conjunction with the Casa Real de Espana have issued (27th March) a new coin which pays tribute to Saint Teresa of Jesus, also known as Teresa of Ávila (1515 – 1582) on the occasion of the 500th anniversary of her birth. A prominent Carmelite nun, Teresa of Jesus is remembered as an author during the Counter Reformation, a Catholic response to the Protestant Reformation initiated by Martin Luther and John Calvin in the early 16th Century. 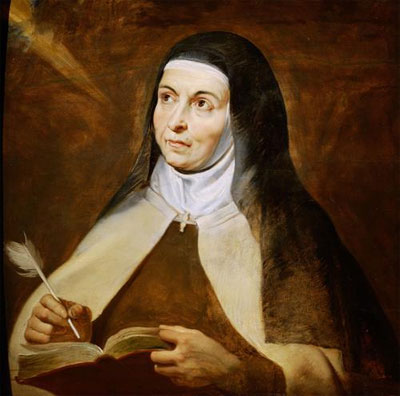 Born in 1515 as Teresa de Cepeda y Ahumada in Gotarrendura, in the province of Ávila, Spain, her paternal grandfather, Juanito de Hernandez, was a marrano or a Jewish convert to Christianity. He was later condemned by the Spanish Inquisition for allegedly returning to the Jewish faith. Her father, Alonso Sánchez de Cepeda, bought a knighthood and successfully assimilated into Christian society. Teresa’s mother, Beatriz de Ahumada y Cuevas, was especially keen to raise her daughter as a pious Christian. Upon the death of her mother when she was 14 years of age, a grief-stricken Teresa embraced a deeper devotion to the Virgin Mary as her spiritual mother. Teresa was sent for her education to the Augustinian nuns at Ávila, common at the time for girls of the merchant and upper classes. St Teresa is also remembered as a reformer of the Carmelite Order and is considered to be a founder of the Discalced Carmelites along with John of the Cross (1542 – 1591)

After her beatification in 1614 by Pope Paul V, Spain debated thereafter who should be the country’s patron saint. The choices were either the current patron, Saint James Matamoros remembered as the “Moor-slayer” or a combination of him and the newly canonized Saint Teresa of Ávila. Teresa’s promoters said Spain faced newer challenges, especially the threat of Protestantism and societal decline at home, thus needing a more contemporary patron who understood those issues and could guide the Spanish nation. However, Santiaguistas, those who were supporters of Santiago or St. James the Greater eventually won the argument, but Teresa of Ávila remained far more popular at the local level and has remained so ever since. In 1622, forty years after her death, she was canonized by Pope Gregory XV, and on 27 September 1970 was named a Doctor of the Church by Pope Paul VI. 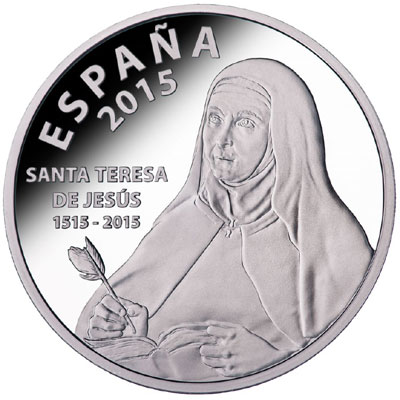 The obverse of the coin reproduces the painting “Teresa of Ávila” by Peter Paul Rubens, in which Saint Teresa is shown in the act of writing, inspired by the Holy Spirit. The commemorative text includes “SANTA TERESA DE JESUS” and the years “1515 – 2015”. 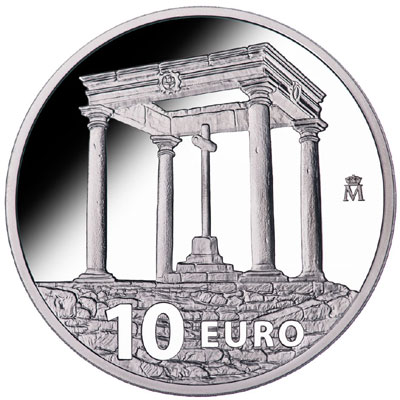 The reverse design depicts the monument known as “Los Cuatro Postes” (The Four Poles), located at a privileged vantage point over the walled town of Avila. This is where the uncle of Teresa of Jesus found the saint and her brother Rodrigo when they were escaping to be martyred in Moorish lands.

The coin is available from the 30th March directly from the retail section of the Fabrica Nacional de Moneda y Timbre. For more information on this and other coins offered, please visit their website at: https://tienda.fnmt.es/fnmttv/b2c/display/%28xcm=Z_TIENDA&layout=6_1_75_64_6_2&uiarea=2&ctype=areaDetails&carea=0000000262%29/.do Information offered in Spanish & English, international orders dispatched.