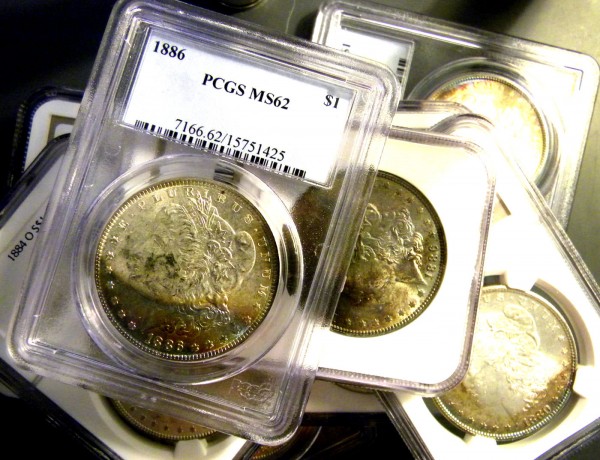 Often reading emails and comments about my articles I become concerned about Coin Update readers wasting time and money bidding on inferior coins in online auctions. I’ve written about this before, explaining the intricacies of grading. I’ve worked with online auction companies, like Proxibid, to level the playing field in requiring sellers to depict lots with clear photos and honest descriptions. Perhaps the best way to instill the importance of grading in hobbyists is to illustrate how I make decisions when bidding in an Internet auction.

One of my favorite sellers is Weaver Signature Coin and Currency Auction on Proxibid. Dave and Cheryl Weaver also work hard to level that playing field with good photos and accurate descriptions–accurate, at least, to their level of numismatic knowledge. I always look forward to their sessions because they usually showcase good investment coins.

But as seasoned buyers like me know, a lot of amateurs with credit cards are going to be relying on descriptions on flips when deciding how much to bid. That’s a surefire way to amass debt rather than a worthy coin collection.

I’ve been bidding and buying coins at shows and online for decades. I’m a professional grader and buyer. Here are my rules:

So let me take you through the process, step-by-step, illustrating how and why I make bidding decisions. We’ll be using photos and lots from the Weaver auction slated Oct. 13 on Proxibid. And I’ll use silver dollars as examples because of the large surface of the coin, allowing you to see small flaws otherwise difficult to detect in smaller denominations, like Mercury dimes.

Never indulge in a bidding war unless you absolutely, positively must have that coin. 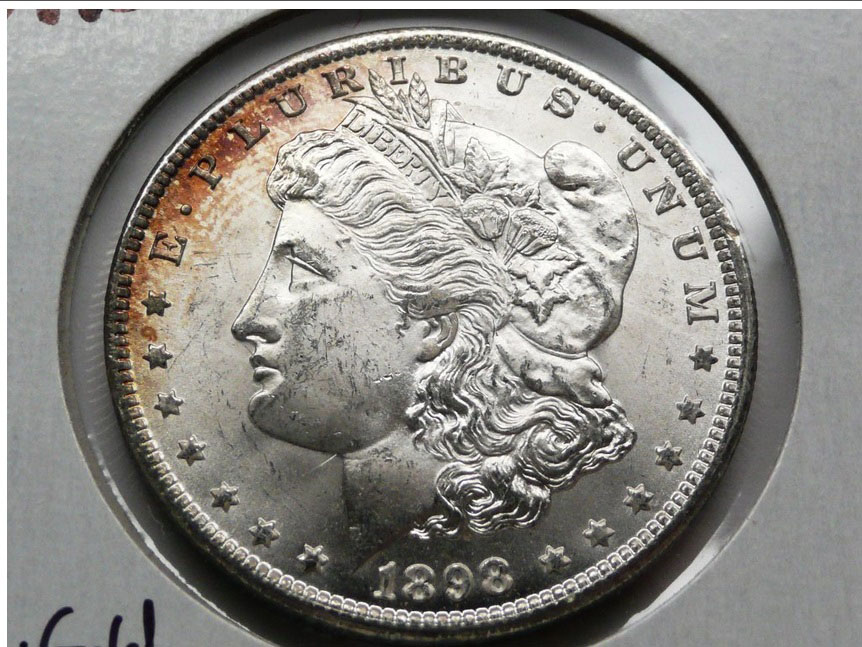 Let’s consider the next lot below, the 1884-CC, one that surely the amateurs are going to bid up beyond any reasonable investment, primarily because this is a Carson City Morgan (some of the worst “bargains” in online auctions as everyone wants one). The label says gem brilliant uncirculated, or MS-65.

It has a small bag mark (see box area under the ear). That brings it down to about MS-64 considering the noise in the left field from the “P” in Pluribus down to about 8 o’clock. But that circled smudge by the “M” in Unum really concerns me. It could be a smudge or worse, a scrape, rending the coin ungradeworthy. 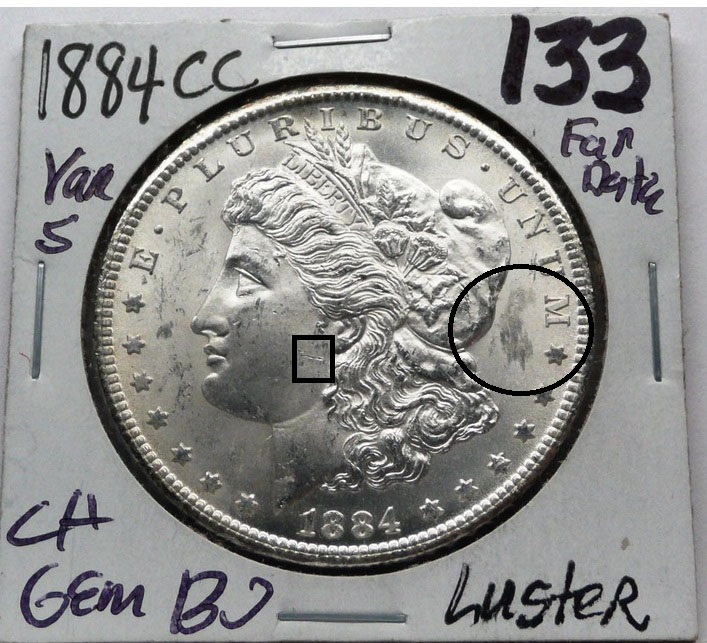 Here’s another Carson City lot from a bottom-tier holdering company that thinks this is MS-65 prooflike.

I say altered cheek and ungradeworthy. No bid here. 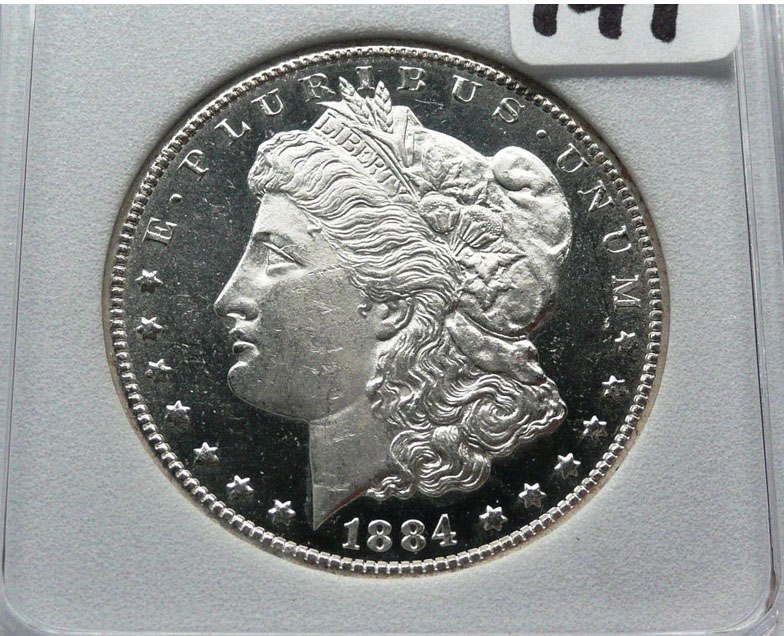 This lot below is probably cleaned. (It looks dipped with loss of luster and poor eye appeal.) 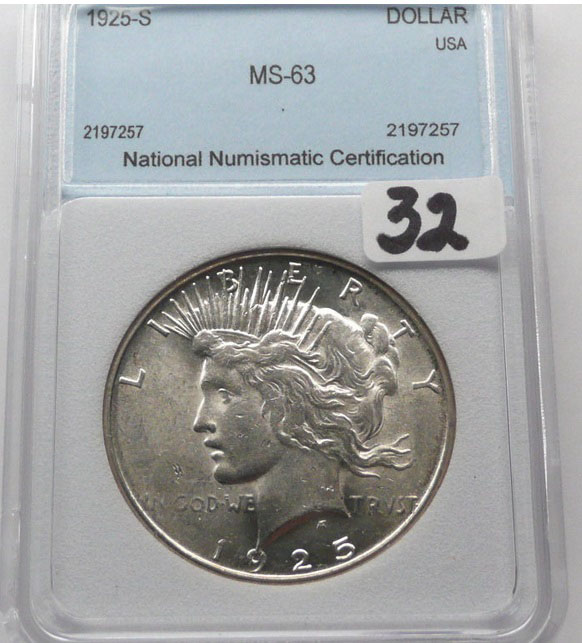 Here’s another Carson City, 1890, with a flip that states “almost uncirculated.” I say cleaned and extra fine. But before I pass on this, I need to see if it is a tailbar variety. See Vamworld.com photos to view the tailbar on the reverse so that you can identify the variety in the future, if you don’t already know what it is.

I checked the reverse. This was not a tailbar variety. Another no bid. 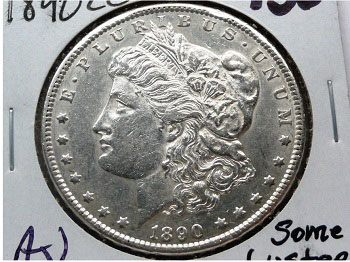 The flip on the 1881-S Morgan below states “beautiful,” maybe “prooflike.” Another comment: “Awesome strike!” (Almost every 1881-S is an awesome strike.)

I say the coin is cleaned and retoned. No bid. 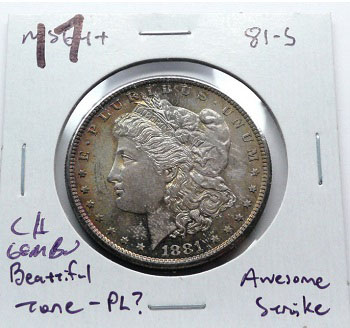 No possible way I will bid on this coin, which also looks cleaned with an altered cheek (smoothed). I have no time for problem coins (or the budget for a coin like this). Others will bid foolishly. Knock yourselves out, I’ll say, so that you have no more money to bid on the coins that I want.

The auction game is a zero-sum game. To win at bargain prices, you have to hope others will run out of funds. 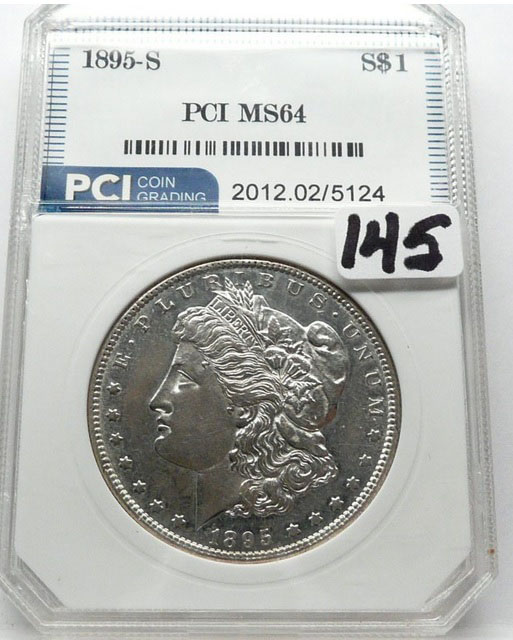 A 1904 at MS-63 is a pricey coin, retailing for about $270. This lot, though, below, lacks luster and probably is cleaned. And that rim mark is deep, probably rendering the coin ungradeworthy.

No bid from me on this. 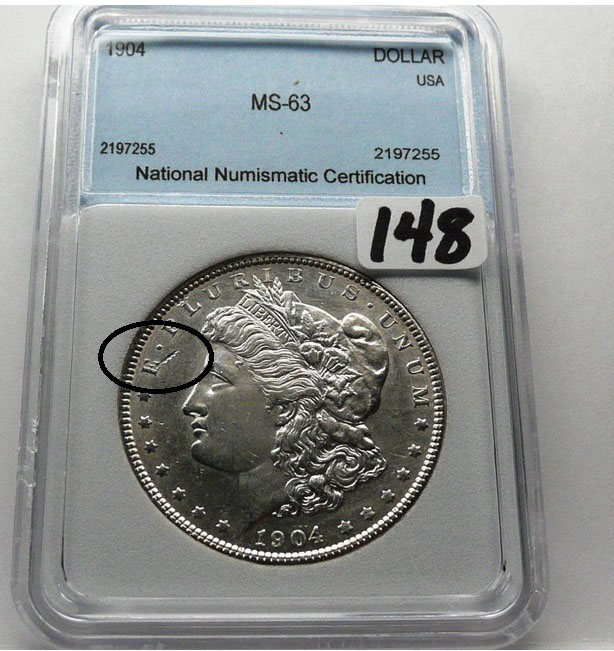 Look at the lot below. This is another common coin, 1878-S, with good luster that may be prooflike. However, I see a problem mark, circled, in the worst place on the cheek, rendering this to MS-64. 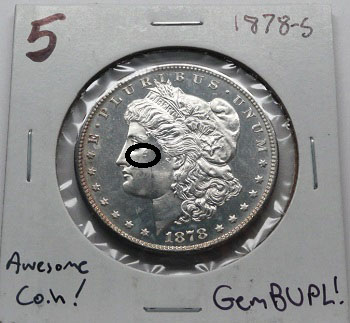 The reverse has slide marks (caused by sliding a coin in and out of an album with a plastic covering): 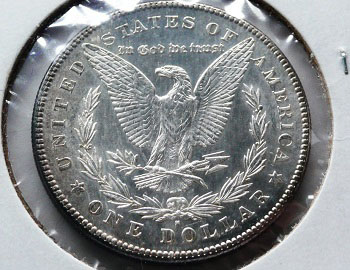 I can bid $60 on the 1878-S optimistically labeled “Gem BUPL!” With buyer’s premium and slabbing, a winning $60 bid will approach $100 with BP and slabbing. If this comes in at MS-64, I make  a very small profit, about $15, according to the latest auction prices. By the way, I don’t think this is prooflike. Both sides of the coin must be for that designation, and the reverse looks like plain Uncirculated.

Now here’s a coin below worth bidding on, an 1880-O at MS-63, with what looks like a hotlist VAM variety on the reverse featuring a doubled or doubly struck mint mark. This may be a $200-$300 coin, so I can bid $85 with a reasonable shot at winning the lot.

That’s what makes auctions exciting, a coin whose true value you know, but that others may not realize. 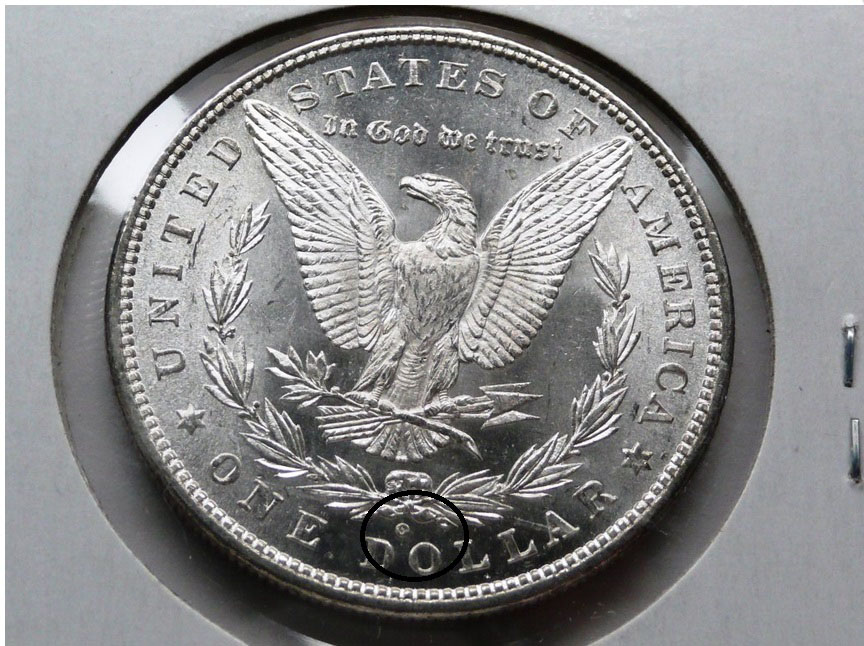 You may or may not have agreed with my strategies here. But consider this: by understanding grading, flaws, and varieties, I am not risking much with my bids, allowing others to spend funds on potentially problem lots. The lesson here is the ability to grade and know auction prices that will keep you in the game, amassing a collection that you can resell for a profit, if that time ever comes.

I buy coins at discount, slab them with PCGS or NGC, and add them to my bank box, often only replacing a lesser coin already in my collection, which I then sell, sometimes for the same price that I bought the upgraded one, essentially improving my collection for free.

So how do you bid in online auctions? What are some of your standards? Share in the comment section below.