The Royal Dutch Mint played host to the country’s new King, Willem-Alexander on Wednesday (22nd January) as the facility officially began the production of Euro coins which will include the portrait of the King who succeeded his mother, former Queen Beatrix on the 30th April of last year. 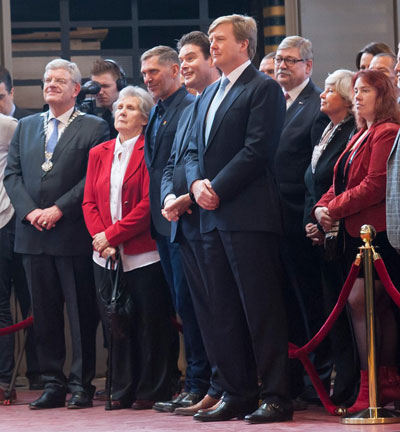 The King, along with the Finance Minister Frans Weekers and Erwin Olaf to his right are greeted by the Mint’s Director who opened the proceedings.

The King was welcomed to the Mint by the Mint’s Director Maartin Brouwer who opened the ceremonies with a short speech in which he commented, “The Royal Dutch Mint celebrates the arrival of a new King with a new era of coins – those of Willem-Alexander, which are a wonderful bridge of the Netherlands and the contemporary art of these coins to the rest of the world.”

The Royal Dutch Mint, which is located in the city of Utrecht began production of all eight denominations from the one euro-cent to the two euro coin in separate coin presses. After the welcoming speeches, the King himself was invited to switch on the first machine and initiated their production by switching on each additional coin press. With the Mint’s Director and the Minister of Finance Frans Weekers also in attendance, the presses began churning out each coin as the King looked on. 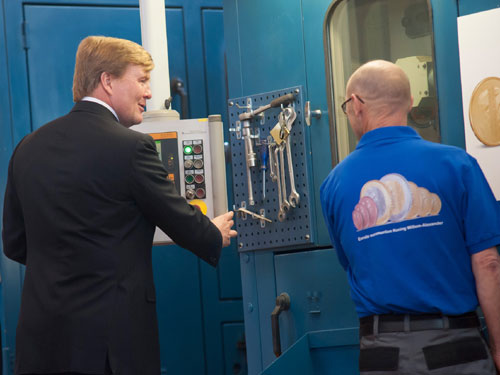 The King is shown starting the coin press producing the 50 euro-cent denomination with the machine’s technician looking on.

Also on hand to oversee the production was the designer of the King’s new portrait Erwin Olaf whose contemporary depiction was the successful design chosen. The design, based on a photograph by Olaf includes two versions, which one portrait is seen on the two and one Euro coins and a second version, that with the King’s name and title divide the portrait vertically. During the ceremony, a proof set of the circulation coins which were produced earlier was presented to the King. 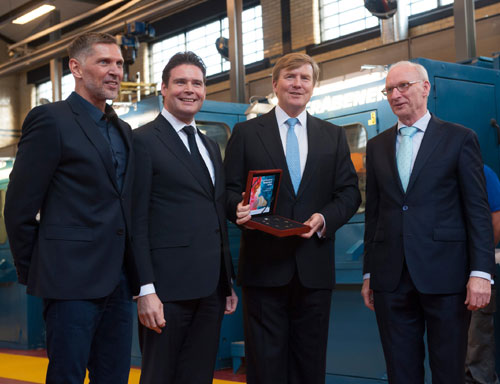 From left to right, artist Erwin Olaf, Finance Minister Frans Weekers, King Willem-Alexander and Maarten Brouwer pose with the proof coin set given to the King to mark the day.

Willem-Alexander, inspected the production of each value and was specifically shown one of the machines which was producing the 50 euro-cent denomination, looking on was the machine’s technician who also answered any questions the King had about their production. Pleased with the end results, the King held up one of the new two Euro coins during production to the invited media for a photo opportunity.

The King holds up a new €2 coin to photographers during the ceremony.

The coins highlighted at Wednesday’s ceremony were for the circulation series of coins, since Willem-Alexander’s accession after the abdication of the former Queen, three collector coins with the new King’s portrait were produced in 2013 which included the Rietveld Schröder House coins, the Palace of Peace coins, and the King’s own accession coins, all produced in both Gold and silver versions ranging from €5 to €50 face values. Several of these coins are still available to purchase.

The new circulation coins are available from the Royal Dutch Mint in various products which includes BU and proof versions. For more information on these and other coins offered by the Royal Dutch Mint, please visit their website at: http://www.knm.nl/Nieuwe-euromunten-NL/nl/page/867/ information offered in Dutch, European destinations dispatched.


*Photos courtesy of the Press office of the Royal Dutch Mint