The Royal British Mint has announced the issuance of a £5 crown coin to mark the 90th birthday of his Royal Highness, Prince Philip the Duke of Edinburgh who will celebrate this milestone event on the 10th June 2011. It is the first time that a British coin will be issued to celebrate a birthday of a presently serving Royal consort to the British Monarch. 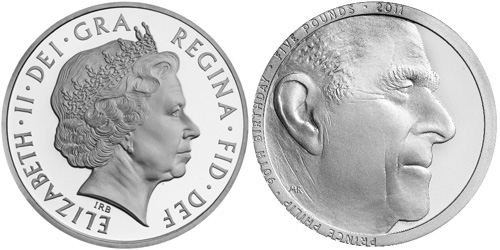 This superbly designed coin shows a detailed and over-sized portrait of the Duke on the reverse, facing to the right and with an inlaid inscription halfway around the rim reading “PRINCE PHILIP 90TH BIRTHDAY FIVE POUNDS 2011”. The obverse of the coin carries the present circulation portrait of Queen Elizabeth II, wife of the Duke of Edinburgh.

The birthday coin will be issued as both a sterling silver coin and a cupro-nickel issue. The silver coin is struck in proof quality and weighs 28.28 grams with a diameter of 38.6 mm.

Prince Philip is the longest serving consort to a British Monarch who will have been in this position for 59 years on the 6th February 2011. His Royal Highness was born Prince Phillipos of Greece & Denmark on the 10th June 1921 on Mon Repos, Corfu Greece to Prince Andreas of Greece and Princess Alice of Battenburg, a granddaughter of Queen Victoria. He and his family were exiled from Greece shortly after his birth and he grew up in Britain.He became engaged to Princess Elizabeth in July 1947 and the wedding took place on the 20th November of the same year. Prince Philip was created the Duke of Edinburgh by his father in Law, King George VI on the day of his marriage. In 1956, Prince Philip founded the Duke of Edinburgh’s award, dedicated to give young people “a sense of responsibility to themselves and their communities”. The award celebrated its 50th anniversary in 2006.

This 2011 Prince Philip 90th Birthday £5 coin will be the third time in which the Duke of Edinburgh appears on national coinage, the first coin was issued for the Royal Couple’s Golden wedding anniversary in 1997 and the second time was for their Diamond wedding anniversary in 2007. The Duke of Edinburgh and the Queen appeared on each of these coins together in conjoined portraits.

For more information on this coin and more planned for 2011, please visit the website of the Royal Mint at: http://www.royalmint.com/