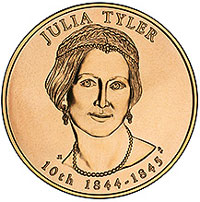 Prices for the First Spouse Bronze Medals were increased yesterday March 18 when the newest release featuring Abigail Fillmore went on sale, priced at $5.50. The medals still available from last year featuring Julia Tyler, Sarah Polk, Margaret Taylor had their prices increased from $3.50 to $5.50. The 2009 First Spouse Five Medal Set, containing all five medals for the year, did not have its price increased. This set remains available for the original price of $15.95.

First Spouse Bronze Medals feature the same designs as used on the corresponding First Spouse Gold Coins with some inscriptions removed. The production of the medals is authorized under Public Law 190-145.