During 2012, the United States Mint will release coins under two different commemorative coin programs authorized by Congress. The first program will commemorate the legacy of the U.S. Army Infantry and the establishment of the National Infantry Museum and Solider Center. The second program will commemorate the bicentennial of the writing of the national anthem, the Star Spangled Banner.

Commemorative coin programs are authorized by acts Congress to honor people, places or events important to the country. In general, only two programs may be approved for each year, although multiple coins can be included as part of each program. Prices for commemoratives include surcharges which are payable to organizations or projects specified within the authorizing legislation. 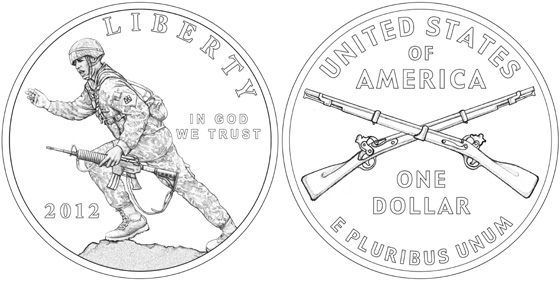 The program commemorating the U.S. Army Infantry will include only a silver dollar with a maximum mintage of 350,000. The design of the coin is intended to be emblematic of the courage, pride, sacrifice, sense of duty and history of the Infantry. The obverse, designed by Joel Iskowitz and sculpted by Michael Gaudioso, features a modern infantry soldier charging forward and beckoning the troops to follow. The reverse, designed by Ronald D. Sanders and sculpted by Norman E. Nemeth, features the branch insignia of the Infantry.

The designs were selected by the Secretary of the Treasury after consultation with the National Infantry Foundation and the Commission of Fine Arts and review by the Citizens Coinage Advisory Committee. (View the initial design candidates and recommendations of the CFA and CCAC.)

Each 2012 Infantry Soldier Silver Dollar is struck in 90% silver and 10% copper with a diameter of 1.5 inches and weight of 26.73 grams. The coins are scheduled to go on sale at the United States Mint on February 16, 2012. During an introductory period, the proof version of the coin will be priced at $49.95 and the uncirculated version will be priced at $44.95. After March 19, 2012, regular pricing of $54.95 for proofs and $49.95 for uncirculated coins will go into effect. A special set incorporating the coin is also expected to be released. 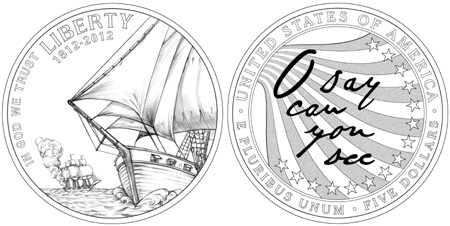 The program commemorating the bicentennial of the writing of the Star Spangled Banner will include $5 gold coins and silver dollars, with maximum authorized mintages of 100,000 and 500,000, respectively. The designs for the coins are intended to be emblematic of the War of 1812, particularly the Battle for Baltimore that formed the basis for the Star Spangled Banner.

The obverse of the  Star Spangled Banner $5 Gold Coin depicts a naval battle scene from the War of 1812 with an American ship in the foreground and a damaged and fleeing British ship in the background. The reverse design includes the first words of the Star Spangled Banner in Francis Scott Key’s handwriting against a backdrop of 15 stars and 15 stripes. The obverse was designed by Donna Weaver and sculpted by Joseph Menna, while the reverse was designed by Richard Masters and sculpted by Joseph Menna. 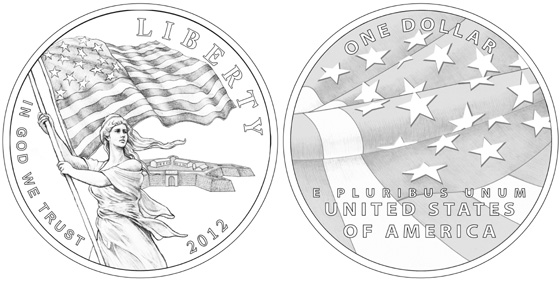 The obverse of the Star Spangled Banner Silver Dollar, designed by Joel Iskowitz and sculpted by Phebe Hemphill, depicts Liberty waving a 15-star, 15-stripe flag with Fort McHenry in the background. The reverse, which was designed by William C. Burgard III and sculpted by Don Everhart, depicts a waving American flag.

Designs for both the $5 gold coins and silver dollar were selected by the Secretary of the Treasury following consultation with the Maryland War of 1812 Bicentennial Commission and the Commission of Fine Arts and review by the Citizens Coinage Advisory Committee. (View the initial design candidates and the recommendations of the CFA and CCAC.)

The anticipated release date for the Star Spangled Banner Commemorative Coins is March 5, 2012. Prices for the gold coins will be determined by a pricing grid, with adjustments made as frequently as weekly based on the average market price of gold. Introductory pricing for the silver dollar is $49.95 for the proof version and $44.95 for the uncirculated version. After April 5, 2012, regular pricing of $54.95 for proofs and $49.95 for uncirculated coins will go into effect. A special set incorporating the silver dollar and a two coin set with both the gold and silver coin are also expected to be released.