Next week, the United States Mint will launch one of the most anticipated commemorative coin programs in recent years. Not only will the coins feature the broadly popular theme of baseball, they will also represent the first “curved coins” struck by the US Mint with convex and concave surfaces. 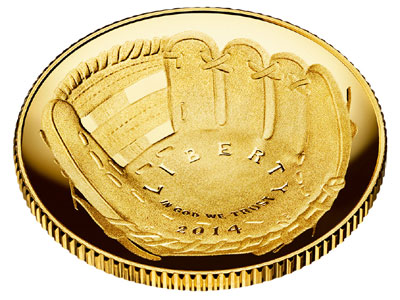 The 2014 National Baseball Hall of Fame Commemorative Coin Program was authorized under Public Law 112-152, enacted on August 3, 2012. The law provided for the issuance of $5 gold coins, silver dollars, and clad half dollars to recognize and celebrate the National Baseball Hall of Fame in Cooperstown, New York as it marks its 75th anniversary. The reverse design of the coins were required to carry the depiction of a baseball similar to those used by Major League Baseball, with the obverse design to be selected through a public competition.

It was indicated as the sense of the Congress that the $5 gold coins and silver dollar should be produced so that the reverse design is convex to more closely resemble a baseball and the obverse is concave for a more dramatic display of the design. Although not suggested or required under the law, the US Mint also decided to produce the clad half dollars in the same convex/concave shape that would be used for the larger denominations. 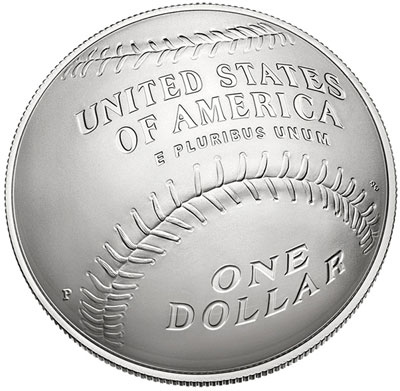 The convex reverse design which will appear on all three coins features a depiction of a baseball with its “sweet spot” positioned towards the top and the stitching seen accentuating the shape of the ball. The inscriptions include “United States of America” and “E Pluribus Unum” across the sweet spot and the denomination positioned towards the bottom.

Initially, the United States Mint had created six different design candidates featuring varied views of the baseball and placement of the inscriptions. Following discussion by the Citizens Coinage Advisory Committee, two additional variations were created. Ultimately, the Secretary of the Treasury selected the design shown above, which was the recommendation of the Commission of Fine Arts.

As required under the authorizing legislation, the concave obverse design was selected through a public competition, which was held from April 11 to May 11, 2013. The contest received a total of 178 design submissions, which a round of internal judging at the US Mint narrowed to a field of 26 semi-finalists. The semi-finalists were evaluated by five members of the National Baseball Hall of Fame Joe Morgan, Brooks Robinson, Ozzie Smith, Don Sutton, and Dave Winfield, who further narrowed the field to 16 finalist designs. 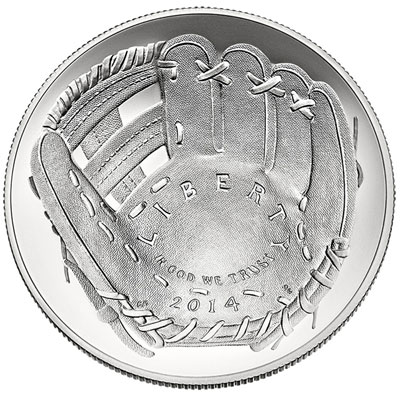 After reviewing the finalists, both the Commission of Fine Arts and Citizens Coinage Advisory Committee recommended the same design featuring a depiction of a 1960’s style baseball glove. The CCAC’s Chairman Gary Marks said, “Committee members felt the concave nature of the coin’s obverse would lend itself well to the baseball mitt image and would be pair well with the convex baseball image on the reverse. The mitt image received 30 of the possible 30 points available through the committee’s scoring process…a perfect score. Perfect scores are rare for the CCAC.”

The final design selection by the Secretary of the Treasury followed the recommendation of the CCAC and CFA. The winning design had been created by Cassie McFarland of San Luis Obispo, California who found inspiration for the design from a well-loved and well-used family glove. The design was engraved by United States Mint Sculptor-Engraver Don Everhart, who was also the designer and engraver of the reverse design.

The United States Mint will begin accepting orders for the 2014 National Baseball Hall of Fame Commemorative Coins on Thursday, March 27, 2014. The $5 gold coins, silver dollars, and clad half dollars are each offered for sale individually in either proof or uncirculated versions. Later this year, the US Mint plans to offer a Young Collectors Set containing the half dollar.

The prices for the $5 gold coins will be determined based on the average weekly market price of gold. If the average price of gold remains within the $1,300 to $1,349.99 range, then the uncirculated version of the coin would be priced at $419.75 and the proof version would be priced at $424.75. Each price reflects a $5 discount available during an introductory period. A maximum mintage of 50,000 applies across all gold product options.

The silver dollars will carry introductory pricing of $47.95 and $51.95 for the uncirculated and proof versions, respectively. After April 28, regular pricing of $52.95 and $56.95 will go into effect. There is a maximum mintage of 400,000 coins across all silver product options.

Prices reflect surcharges of $35 per gold coin, $10 per silver dollar, and $5 per half dollar, which will be distributable to the National Baseball Hall of Fame to help finance its operations.

The United States Mint has previously offered other baseball themed commemorative coins. In 1992, a silver dollar issued for the 1992 Olympic Games featured a baseball pitcher on the obverse. One of the 1995 Olympic Half Dollars depicted the scene of a baseball batter, catcher, and umpire at home plate. In 1997, a commemorative coin program including $5 gold coins and silver dollars honored Jackie Robinson, the first black MLB player, Rookie of the Year, and Hall of Famer.