This year the United States Mint will issue 2010 Boy Scouts of America Centennial Silver Dollars in commemoration of the 100th anniversary of the founding of the organization. The coins are currently scheduled for release on March 23, 2010. 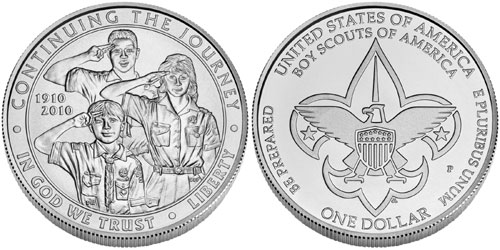 The designs for the 2010 Boy Scouts Silver Dollars were unveiled by the United States Mint on December 17, 2008. The obverse (heads side) of the coin features an image of a Cub Scout, Boy Scout, and female Venturer saluting. The inscription “Continuing the Journey” is included, along with the anniversary dates of the organization “1910” and “2010”. The reverse (tails side) of the coin features the Boy Scouts of America universal emblem. Inscriptions include “Boy Scouts of America” and the Scout motto “Be Prepared”.

The 2010 Boy Scouts Centennial Silver Dollars will be minted in proof and uncirculated versions with a maximum mintage of 350,000 coins across all product options. These coins will be available directly from the United States Mint with sales currently scheduled to begin on March 23, 2010 at 12:00 Noon ET.