The United States Mint will introduce a new series of silver bullion coins this year. The coins will feature the designs of the America the Beautiful Quarters and will be struck in 5 ounces of .999 fine silver. Although a release date for the coins have not yet been established by the US Mint, anticipation has been running high for the new bullion product. 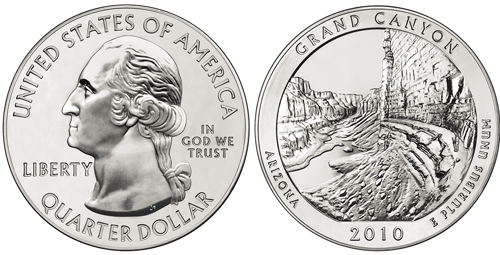 The America the Beautiful Silver bullion coins were authorized under Public Law 110-456, the “America’s Beautiful National Parks Quarter Dollar Coin Act of 2008”. The law provides for a new series of circulating quarter dollars featuring national parks and sites from each of the states, territories, and the District of Columbia, as well as an accompanying silver bullion coin series with designs that are exact duplicates of the quarters. This includes the denomination stated as “QUARTER DOLLAR”, which curiously gives the over-sized bullion coins a legal tender value of 25 cents.

Additional requirements for the bullion coins include a weight of 5.0 ounces, diameter of 3 inches, composition of .999 fine silver, and incused edge lettering indicating the fineness and weight of the coin. The law specifies that the coins may be available for sale no sooner than the first day of the year of issue for the corresponding quarter. The coins may only be available for sale during the year in which the quarter is issued. 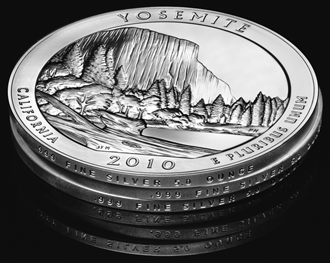 The US Mint was reported to have begun production of the America the Beautiful Silver Bullion coins at the Philadelphia Mint on September 20, 2010. The coins have the required diameter of 3.0 inches, which results in a thickness of 0.16 inches. The edge of the coin carries incused lettering “.999 FINE SILVER 5.0 OUNCE.”

The 5 ounce silver coins will be packaged for distribution in tubes containing of 10 coins, resulting in a bullion weight of 50 ounces of silver. The tubes will be placed in vaccuum formed inserts in molded plastic shipping containers. The tubes and containers will be marked with the seal of the United States Mint.

Similar to other bullion products of the US Mint, the America the Beautiful Silver Bullion coins will be distributed through a network of authorized purchasers. These bulk bullion dealers buy the coins directly from the Mint and then resell the coins to other bullion dealers, coin dealers, and the public.  Authorized purchasers will be able to order the new silver bullion coins in minimum quantities of 2,000 coins, with purchases above the minimum allowed in 100 coin increments. Pricing for authorized purchasers will be based on the market price of silver plus a premium. The level of the premium has not yet been established.

This product will represent the second silver bullion program of the United States Mint. The current American Silver Eagle bullion coin program was authorized in 1985, with the first coins released in 1986. These coins contain one ounce of .999 fine silver and are required to be produced in quantities sufficient to fulfill public demand. Premiums charged to authorized purchasers are $2 per coin above the market price of silver. For the year to date, the US Mint has recorded sales of 27,480,500 of the one ounce coins.