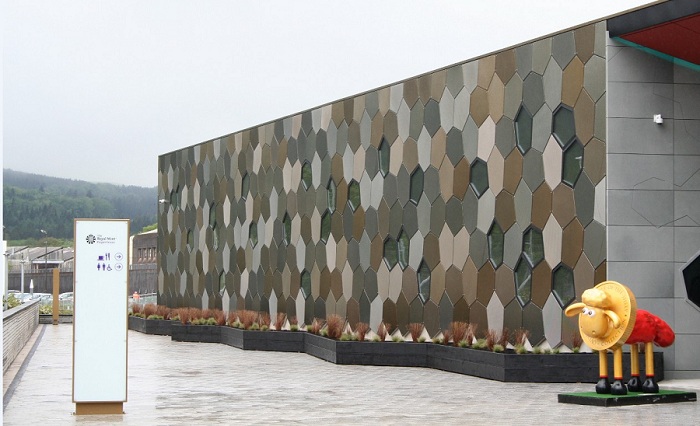 It’s been talked about for some time: a Royal Mint visitor’s center where the public can be welcomed and invited to learn a little more on the subject of coin production. The project was announced in May of 2014; after receiving some financing from the Welsh government and the final go-ahead from HM Treasury, work on the Mint’s first-ever visitor’s center began in earnest with a deadline for completion set for the spring of this year.

The day before its official opening, the Royal Mint previewed the new visitor’s center based in Wales, which they have appropriately entitled “The Royal Mint Experience.” A small list of guests were invited in before the doors opened to the public, and luckily I was among them.

Although I was given a personal tour by one of the Royal Mint’s resident coin experts from start to finish, I felt as though I could easily take the tour again to get a better look at the many coins and informative videos on display. There’s a lot of information to take in as it all represents over a thousand years of coin-making. The Royal Mint has done well to ensure visitors are knowledgeable by the time they take their leave. 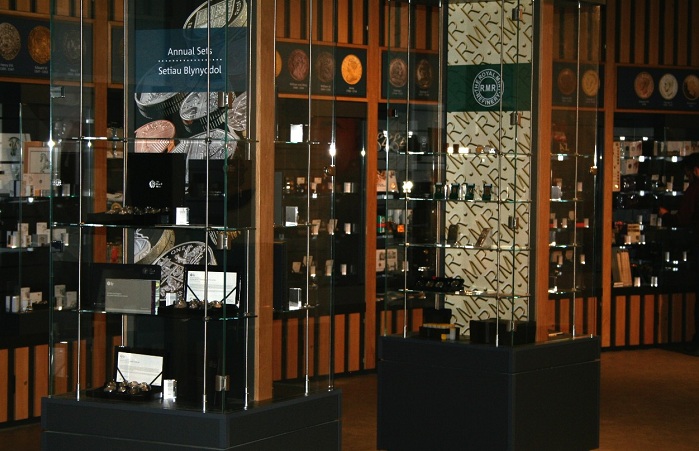 When you arrive at their immense production facility, opened by Queen Elizabeth II in 1968, you are welcomed by a modern, new purpose-built annex to the main complex that has its own entrance aside from the business entrance of the Mint. A large lobby offers you the choice of going directly to the retail and souvenir shop to the left of the entrance or to the large naturally sunlit café that opens to a terrace with outdoor seating.

Unless you’re in need of some refreshments, make your way directly to the first chamber of the tour which includes an introductory video explaining the origins of the Royal Mint — after all they are the country’s oldest continuing business entity, having produced the coinage of the realm since the 9th century, beginning with Alfred the Great’s first silver pennies. After passing through security gates — you are entering the actual grounds of the Mint so checks are in effect — you are led by your tour host to the first chamber, which includes a welcome video. The video is short but informative; from there the behind-the-scenes excitement begins. 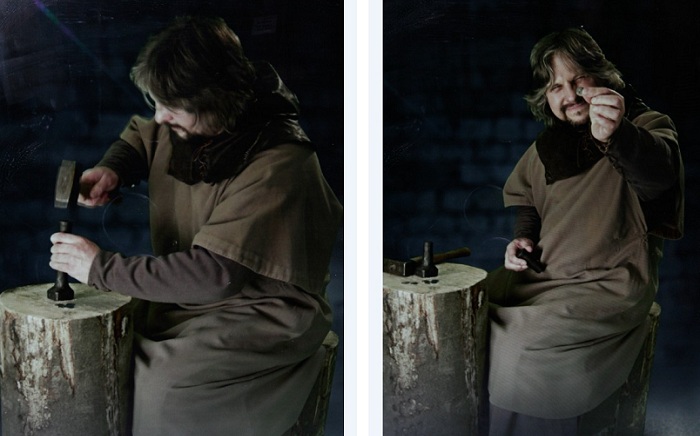 The next phase of the experience is where the visitor’s center excels. This is when you are guided to the actual floor of production, but first things first. A new exhibit has been added to a former lobby that includes a set-up of the preliminary steps of coin production. On display are large bricks of metal that are destined to become someone’s pocket change, with ingots and pressed rolls of suitable plates where the blanks are punched out of for eventual minting. Dies and collars — the part of the coin which becomes the edge of all coins — are explained, and machinery is used to demonstrate how the letters found on many British and international coinage are added to increase security. There is a current set of dies of the British circulation coins on display, including the latest obverse portraits of the Queen as well as some of the newest reverse designs for both circulation and commemorative coins. 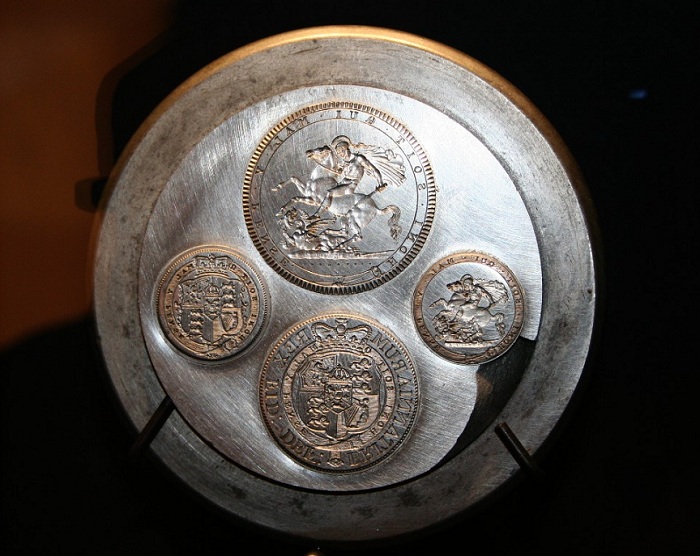 The next stop is where the coins of over 60 countries are produced, including those of the United Kingdom. The main floor of production for the Royal Mint is in use and minting coins 7 days a week, 24 hours a day, except during holidays. Here visitors can see for the first time just how the production is carried out without receiving a special invitation from the management, or having to wear a hardhat and safety vest.

From behind a new sound-proof glass wall, the activity is observed from a safe distance. You can see the dozens of minting presses churning out over 700 coins a minute, filling blanks into these presses, in addition to the counting and weighing done with forklifts and drums that move all of these metal discs around from point A to B. In total, by year’s end, the Royal Mint can churn out a staggering nine billion coins.

After a visit to the production floor, you yourself can get in on the action by striking your own coin, albeit it from a safe and comfortable distance. On my visit, the Royal Mint offered the chance to strike a 2016-dated one pound coin with a one-year only reverse design that comprises representations of England, Scotland, Northern Ireland, and Wales. 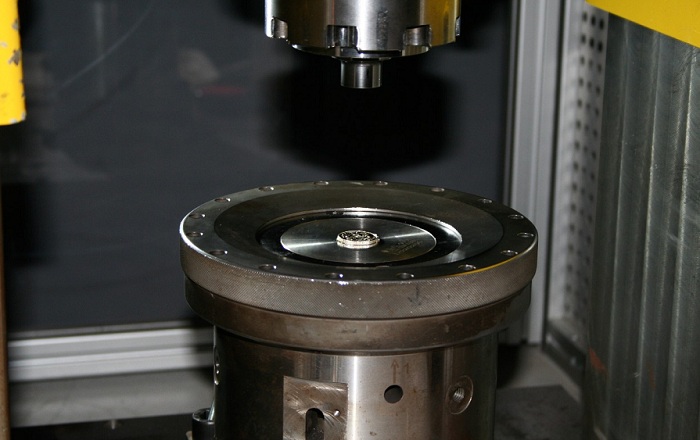 My latest coin struck at the Royal Mint!

In 2013, the Royal Mint announced they would discontinue production of the current one pound coins in favor of a newly designed security-enhanced bi-metallic 12-sided coin to deter counterfeiting. For 2016, no one-pound coins of the current design will be produced for circulation, so striking your own piece is one way to obtain one of the last 2016-dated “round pounds.” The coin you minted personally by pressing the button on the minting press is housed in a special folder attesting that you struck this coin — the best souvenir of the day. You can also have your photo taken in front of nearly 300,000 new 12-sided one-pound coins.

After this phase of the tour, you are guided to return back to the visitor’s center and café area, where the next segment begins with a continuation of the history of the Royal Mint. From its origins at the Tower of London where (for the most part) it all started on Mint Street, to the move out of the Tower in 1810, to the 1968 move to Wales, the history of the Mint is comprehensively covered. 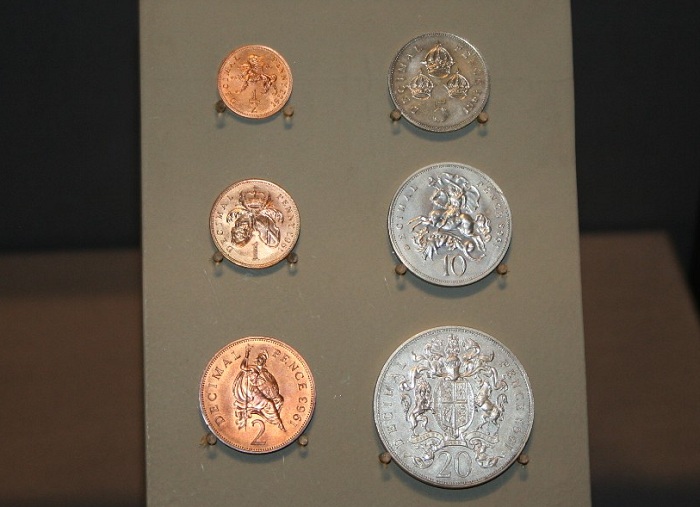 We were given a closer interactive look at the techniques of early money-making from hand-striking to a more mechanical process, to the current state-of-the-art processes on display. As design is a major part of coin production, this part of the tour paid particular attention to how a coin gets from an idea on a sketch pad to the actual minting presses, and the materials and mechanics used in the process were neatly exhibited. On hand are recorded comments from some of the designers I myself have interviewed or spoken to over the years, including Claire Aldridge, designer of the Olympic Countdown crown series, and Jody Clark, the talented artist behind the fifth portrait of the Queen unveiled in March 2015. 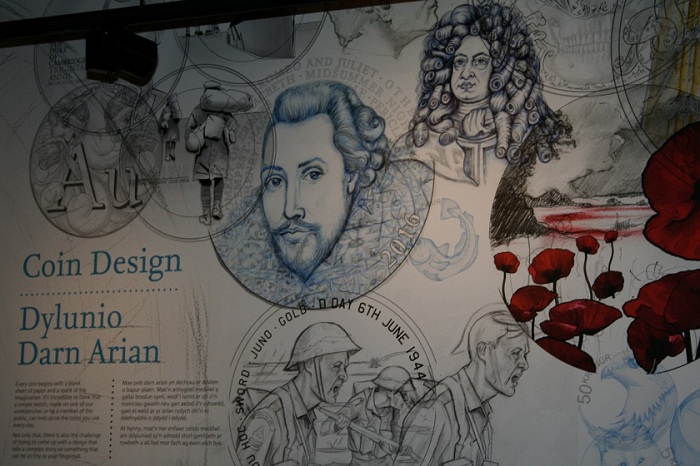 Of particular interest is the very work bench on which Benedetto Pistrucci (1783 – 1855) created some of his exquisite and more memorable designs. Pistrucci is the famed medallic artist who created the iconic design of St. George slaying the dragon for use on the sovereign in time for the reform coinage act of 1816. The 200th anniversary of his important work with the Royal Mint will be celebrated next year.

Some of the rarer coins on display from the archives and museum of the Royal Mint are shown below. 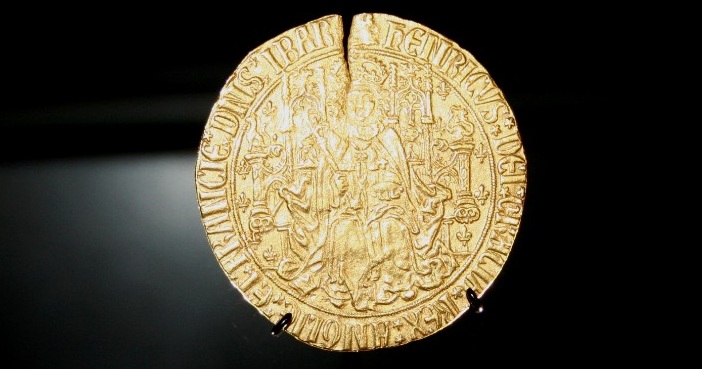 One of the first examples of the Gold sovereign, struck during the reign of king Henry VII.

The coins authorized by Queen Elizabeth I, including a commemorative medal celebrating her visit to the Mint on July 10, 1561, just three years after her accession. 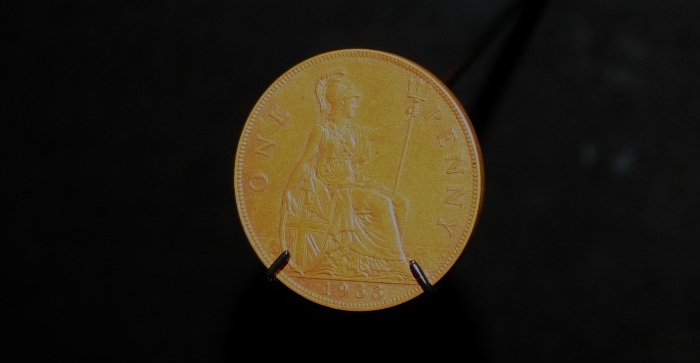 The test patterns of the first series of decimal coins including a 20 pence coin designed by Sir Christopher Ironside; these designs were rejected in favor of the final ones that appeared on UK reverse circulation coinage from 1968 until 2008, the longest span of time that reverse designs were ever used.

As the visitor’s center has at its disposal the consultancy of the museum of the Royal Mint, there is a great possibility that in addition to those rarities currently on display future exhibitions will feature many more coins seldom seen by the public.

With the preview tour concluded, it was time to catch up with those members of Royal Mint management and staff that have had a direct hand in the completion of the new complex to thank them for their hospitality. I thoroughly enjoyed myself; this enterprise was indeed long overdue and I’m glad it has finally become a reality.

There is sure to be a lot of activity in the UK next year with regard to currently circulating money. There will be a new one pound coin, a celebration of the excellence of Benedetto Pistrucci. A second polymer bank note — the £10 denomination — will be released into circulation, and the new £5 issue is to be released later this year.

Whether you are a genuine coin fanatic or just mildly curious as to how a small metal disk is turned into one of the coins found in your pocket, I wholly recommend a visit to the new Royal Mint Experience. The visitor’s center is well designed and family- and child-friendly — students of all ages will have a ball!

For more information, please visit the Web site of the Royal Mint. I would like to thank the Royal Mint’s department of press and PR for their kind assistance and hospitality during my visit. It is greatly appreciated.