The D. Brent Pogue collection is arguably the greatest collection of early American coinage assembled in our lifetime. Back in May, Part I of the collection saw a huge amount of interest, which we expect to grow during the coming auction. These will continue for several years, thanks to the extent and depth of the collection. Jointly organized by Stack’s Bowers and Sotheby’s, part II will come up for auction in New York City on September 30 and consists of Capped Bust half dollars (lots 2001 through 2040), Flowing Hair silver dollars (lots 2041 through 2047), Capped Bust and Classic Head quarter eagles (lots 2048 through 2068), Capped Bust half eagles (lots 2069 through 2090), and Capped Bust eagles (lots 2091 through 2105). In this first preview article we will cover the highlights of the silver coins offered in this part of the Pogue collection, while the gold coins will be covered in a future article. All lots can be viewed on the Stack’s-Bowers Web site. 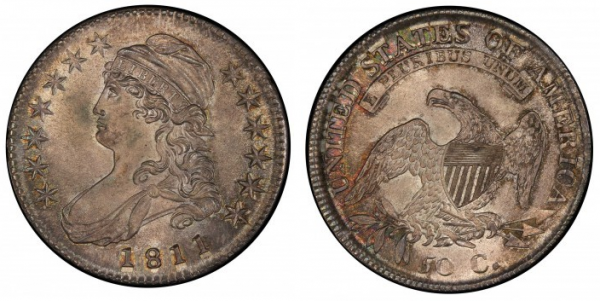 The first lot we will take a look at is 2011, an 1811 Capped Bust half dollar graded MS-67 by PCGS, touted in the catalog as “one of the best preserved Capped Bust half dollars extant.” Amazingly, this is not the only coin of this type at this level in the collection, as the Pogue collection includes a total of six MS-67 or MS-67+ Capped Bust half dollars, virtually all of which are the finest of their respective dates at PCGS. The survival of any such coin is nothing short of a miracle. In the early 19th century, 50 cents was quite a bit of money for a single coin, and the lack of coin collectors in the United States meant that few were set aside for collecting purposes (collecting of federal United States coinage did not take off until the 1850s). As a result, those that do survive at such levels are few and far between, and the quantity of MS-67 and better coins in the Pogue collection represent a large part of the existing population.

Lot 2021 is of a different caliber but equal importance. It is the finest known example of the Overton-102 1817/4 Capped Bust half dollar, graded VF-35 by PCGS. A rare overdate variety listed in the Red Book, two varieties are known, distinguished by the absence or presence of a dissecting obverse die crack. Both varieties are rare and seldom offered for sale, with demand high from specialists hoping to complete the series by Overton number (not an easy task, for sure). While the Eliasberg coin of the variety with the die crack is graded AU-53, all other survivors saw much more extensive circulation, with the majority of coins grading between Very Good and Very Fine. With less than a dozen examples of the overdate known to exist of both varieties, auction appearances are infrequent, and the Pogue collection coin should see intense bidding interest.

Proof coins of early American coinage (dated before 1857, when regular Proof coin production began at the Philadelphia Mint) are extremely rare, and seldom offered for sale. Among the most heralded of these are the Proof half dollars of the Capped Bust design, the largest silver denomination struck for most of the first half of the 19th century.­ The Pogue collection offers three of these Proofs: an 1818 graded PCGS PR-65 (lot 2029), an 1821 graded NGC PR-65 (lot 2036), and an 1822 graded PCGS PR-65+ Cameo (lot 2039). All these are seldom found in Proof format, with only two or three known at most of each date. The 1822, for example, is one of just two Proof examples of that date known to exist and, incredibly, they were struck from different dies. It shouldn’t come as a surprise that assembling a Proof run of Capped Bust half dollars is difficult and could take several lifetimes to complete. Completion is unlikely to be on the mind of the successful bidders for these coins, though, as even a single Proof Capped Bust half dollar would be the highlight of any advanced collection.

When it comes to highlights in the Pogue collection, few series are as impressive (and as short) as the Flowing Hair half dollars of 1794 and 1795. A total of seven coins extensively cover the type, offered as lots 2041 through 2047. The quality of these earliest silver dollars is impressive, with all coins certified by PCGS and ranging in grades from MS-64 to MS-66+. Lot 2041 is of particular importance: a 1794 silver dollar graded PCGS MS-66+. This legendary first silver dollar of the young nation had a mintage of just 1,758 coins, and virtually all survivors are well circulated. Uncirculated pieces are very rare and seldom available, making this offering even more important. All coins were delivered to Mint Director Rittenhouse on a single day, October 15, 1794, and this limited mintage would constitute the only silver dollars dated 1794. Approximately 10% of the original mintage is thought to survive (between 135 and 150 pieces, several of which are permanently impounded in museum collections around the world) and demand is always high for this important early American coin. The coin from the Pogue collection is well-known and extensively pedigreed, traced back to before 1834 and plated in various references.

The six 1795 Flowing Hair dollars that follow the 1794 issues are almost equally impressive. Four different die varieties are represented, and while it is hard to single out a particular coin as a highlight, lot 2043 is very impressive, the finest known 1795 silver dollar with a silver plug. The plug was a pre-strike adjustment to correct the weight of the planchet and is found on many 1795 silver dollars, generally considered a separate variety. The coin is considered the second-finest 1795 silver dollar known to exist, graded MS-65+ by PCGS.

Our next preview of the second Pogue collection auction will focus on the gold coins in the sale, which includes many other rarities, again with quite a few finest known coins that have been off the market for decades.