The July FUN show, organized by Florida United Numismatists in Orlando FL, is held from July 9 to 11 this year. As part of the show, Heritage Auctions will be holding a signature auction. A total of 3,268 lots will be offered, ranging from colonials to high-grade Federal coinage and everything in between. In this preview, we will take a look at some of the most exciting and rarely seen coins offered in the auction. The lots discussed in this article and all others in the auction (both floor and online-only sessions) can be found on the Heritage’s website. 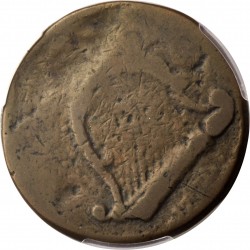 The first lot we will discuss is the second lot in the auction, lot 3002, which features a very rare example of the 1776 New Hampshire Copper. This extraordinary copper coin appears to have been produced in the year of America’s Declaration of Independence. The New Hampshire House of Representatives appointed a committee in March of that year to research the possibility of producing a copper coin that appears to have been struck in small quantities shortly thereafter. Survivors of this type are extremely rare, and always in extremely low grade. The coin offered by Heritage is pedigreed to the Green & Newman collections, and is now certified by PCGS as VG-8 with a CAC sticker. The coin sold as part of the Newman collection at Heritage in an NGC VG-10 holder in November of last year, when it realized $94,000 including the juice. 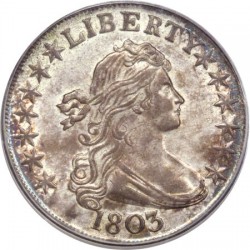 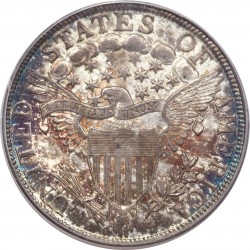 Lot 3128 is the first Federal Coin we will discuss, a PCGS MS63 CAC graded example of the 1803 Draped Bust Half Dollar, one of the finest known examples of this particular issue. While the numismatic market is currently in the process of absorbing the high grade early American rarities coming from the Pogue collection, this particular coin is an example of high grade rarities coming from other sources. Certified at the same grade level as the Pogue coin of this variety (large 3, although the Pogue coin was struck by a different die pair) the coin is a wholesome and  original example of this date, usually seen in well-circulated condition. The Pogue coin realized $76,375, including buyers premium, and the coin offered by Heritage should realize somewhere in the neighborhood of that figure as well. 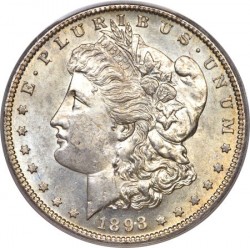 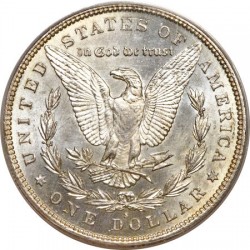 Morgan Silver Dollar collectors will be familiar with the classic key-date of the series, the 1893-S, which only saw 100,000 pieces produced for circulation. The majority of survivors are in circulated grades, and even AU pieces are considered very rare. Offerings of mint state survivors seldom occur, making lot 3230 in the Summer FUN auction all the more special. The coin is a wholesome, appealing, uncirculated survivor of this issue, graded MS63 by PCGS and certified in a so-called “old green label holder.” While an MS63 is an extremely common coin for many dates in this series, this is obviously not the case for this date, of which PCGS has graded just 10 coins finer than this piece. According to our research, there has not been an MS63 offered at auction since 2009(!), making this lot a seldom-seen opportunity for the advanced Morgan Dollar specialist to acquire a high-grade example of this date. 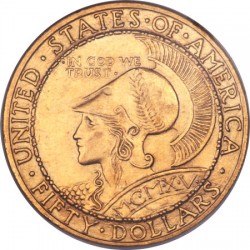 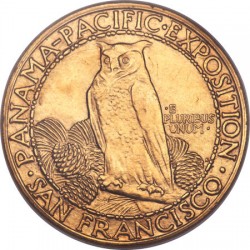 Classic gold commemoratives as a whole are a scarce subset of American commemoratives, struck in the early 20th century in limited quantities. The most famous and highest valued coins in the set are the two 1915-S $50 Gold Pieces, struck to commemorate the Panama-Pacific Exposition in San Francisco that year. Produced in both round and octagonal format, the Summer FUN auction includes an NGC MS61 example of the round $50 gold piece offered at lot 3420. While both versions are rarities, the round version is scarcer, with a net mintage (after melting) of just 483 coins. Containing approximately 2.5 ounces of gold, it should not come as a surprise that few people could afford these “slugs” at the time the coins were issued–and today that is no different. Even though higher graded examples are occasionally available, a coin such as the one offered by Heritage should attract considerable attention as collectors hope to add an example of this enigmatic issue to their collections. 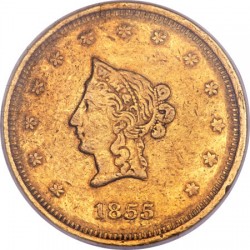 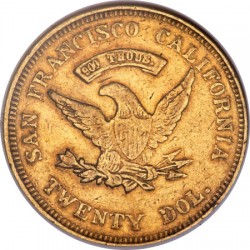 The final lot we’d like to discuss in this preview is lot 3432, a twenty dollar gold piece dated 1855 and struck by the firm of Wass, Molitor & Co. in San Francisco. Graded AU53 by NGC, the coin is one of the final territorial gold coins struck in California at a time when the San Francisco Mint had already been established. Despite featuring a much smaller head of Liberty on the obverse, this coin bears a design similar to the Federal gold coins produced at the San Francisco mint at the time. These coins are survivors of a time when the coins circulating in the West were a wide variety of different issues, including privately produced gold coins struck in the city as early as 1849, with many containing much less gold than their denominations indicated. A coin like the one offered by Heritage, however, would have been produced by one of the few firms known for their high standards, and should have contained close to its purported $20 in gold. Many, though, were still melted in the following years, and survivors of this issue are prime rarities.