In conjunction with the New York International Numismatic Convention that is held during the first week of 2015, Heritage Auctions is holding several auctions of ancient and world coins. The top material will be sold during Platinum Night, held on Monday January 5, 2015 at the Waldorf-Astoria Hotel in New York City. In this preview we will take a look at some of the highlights that are included in the 467 lot offering that will be sold that night.

The auction starts with Ancient Greek Coinage, including the California Collection of high-quality artistic Greek coinage. Lot 30861 from this collection, estimated at $70,000-$90,000 is a very rare tetradrachm from Sicily, designed by the engraver Choirion. The coin is considered one of the most artistic and among the earliest of a series made in the 5th century BC by famous engravers, all of which signed their work on the coins themselves. This particular example is one of fewer than 10 known examples in private hands. It shows the facing head of Apollo on the obverse, and a racing chariot on the reverse. The collection also includes an example of the earliest coinage known to exist, offered as Lot 30924, an Half Stater from Iona dating back to 670-660 BC and estimated at $10,000-$14,000.

Lot 30932 is a highly specialized collection of 38 silver Shekels that date back to the presumed lifetime of Jesus. The coins are dated on the reverse, and this collection includes examples coins ranging from approximately 5 BC to 34 AD, coinciding with what researchers have concluded to be the approximate dates of Jesus’ life. The collection, collected by Frank Kovacs is offered in its entirety as a single lot and is estimated at $150,000-$200,000. 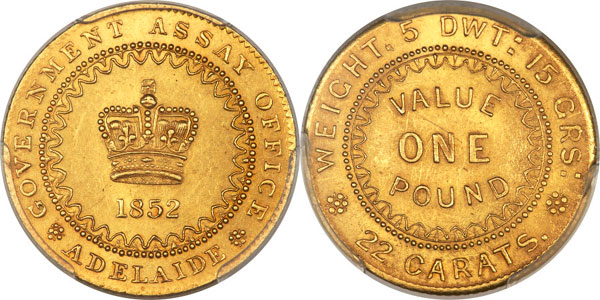 After Roman and Byzantine Ancients are offered the world coin section of the night starts. Lot 30996 is a near-gem (PCGS MS64) graded example of the 1852 Adelaide Pound. Among the earliest and rarest of all Australian gold coins, the coin is a private gold issue from the Australian Gold Rush of the early 1850s. While the issue had a sizable mintage of almost 25,000 coins the majority were melted due to their intrinsic value being more than the face value of one pound, and less than 200 coins are presently known to exist. The coin is estimated at $50,000-$60,000.

Several off-metal patterns are also worth mentioning. Lot 31181, a 1924 British 6 Pence struck on a gold planchet, one of just three gold examples known to exist. The piece has been graded MS63 by NGC, despite a small 3 carved into the coin by the Royal Mint, indicating that this was the third and final piece struck. Produced for trial purposes, the piece is obviously of the utmost rarity, and is estimated at $30,000-$40,000. Another gold trial piece is Lot 31301, a South-African 1897 6 Pence struck on a gold planchet, graded NGC PF-63 Cameo. Unique in all aspects, this is the first public offering of this coin in recent history. Estimated at $250,000-$300,000, and is one of the most significant pieces in all of South-African numismatics. The next Lot 31302 is the same 1897 6 Pence, this time struck on a copper planchet. Graded MS64RB by NGC and estimated at $150,000-$200,000, the coin is just as unique and important, and like the example struck on a gold planchet, can be traced back to the Royle Baldwin Collection of South-African trial pieces. The pieces appear to have been together since they were struck, and were most likely produced for a notable, perhaps Paul Kruger himself, who is on the obverse of both coins. Neither issue has ever been offered at public auction.

These are just a few of the highlights that will be offered at the Platinum Night auction. Virtually every lot in the auction deserves it’s own mentioning in this article. For those interested in the auction the entire auction can be viewed at Heritage’s website. All the Platinum Night lots as well as those in the Signature Auction can be accessed though the following link: http://coins.ha.com/c/auction-home.zx?saleNo=3037&ic=hero-NYINC-worldCoins-auctionHome-auction3037-121014