The second week of April will see the Chicago International Coin Fair (CICF) organized in Rosemont, IL, a suburb of Chicago close to O’Hare International Airport. Known for its active bourse floor focusing on ancient and world coinage, Heritage Auctions will be organizing both floor and online coin & currency auctions. In this preview article we will take a look at some of the most rare and unusual pieces in the coin auction, which will be organized on April 9  and 10. All lots discussed in this article as well as all others can be viewed online by accessing this link: http://coins.ha.com/c/auction-home.zx?saleNo=3040&ic=Items-OpenAuctions-Open-BrowseAuctionInfo-071713.

The auction starts with selections of the Ancient World. Lots 29016 and 29017 are perhaps the highlights of these coins, a pair of silver decadrachm’s struck in Syracuse in Sicily during the time of Dionysius, which translates to approximately 406-367 BC. While both coins are of identical design (a chariot with Nike flying above on the obverse, and a head of Arethusa surrounded by dolphins on the reverse) what makes these lots different and very interesting is that the reverse of both coins includes the name of the engraver: Lot 29016 is signed by Kimon and lot 29017 by Euainetos. While these people are only remembered by the names on the dies they engraved, we can see the distinctively different artistic merits of both artists when comparing these coins side by side. Two very historical coins, both lots are estimated at $30,000-$40,000 each.

We enter “modern” times with lot 29398, a very rare Brazilian gold 10,000 Reis dated 1724-M, struck during the reign of Joao V and graded AU58. The classic key-date of this short-lived series struck at the Minas Gerais mint. This coin is the 2nd example to be offered at Heritage this year, an NGC MS62 graded example sold for $48,175 in January. This particular example comes with an estimate of $45,000-$55,000, and should see considerable attention from the underbidders of the lot that sold in January, as this is a coin that is seldom offered for sale, let alone twice in a few short months.

Over the past decade or so modern Chinese coins have seen a tremendous increase in interest and value, after having been overlooked by many people in the decades prior. While the market has matured recently, with more stable prices, modern rarities are still highly coveted and many issues seldom come up for sale. One such issue is offered as lot 29558, a 1993 “Year of the Rooster” 5 Ounce Gold 500 Yuan graded PR69DCAM by PCGS. The coin had an original mintage of just 99 pieces, and was struck in a decade when bullion prices lingered at lows now unimaginable, and some of the 99 pieces struck were no doubt melted due to a lack of collector interest. In today’s market the coin is estimated at $60,000-$65,000.

Money circulation in the Caribbean during the 18th and 19th century was a mess of coins from around the world, with many cut and countermarked pieces used on various islands. The Jamaica legislature passed an ordinance in 1758 that authorized the countermarking of Spanish Colonial coins of all denominations for circulation on the island per British Standard (Jamaica being under British control at the time), and the Heritage auction includes the rarest of all: a “GR” countermark on a Spanish Colonial Gold 8 Escudos, which was to circulate for 5 Pounds on Jamaica. Graded XF Details (Tooled) by NGC, there are less than a dozen confirmed pieces known of this denomination. The piece is estimated at $25,000-$30,000 and should attract considerable interest from specialized collectors. 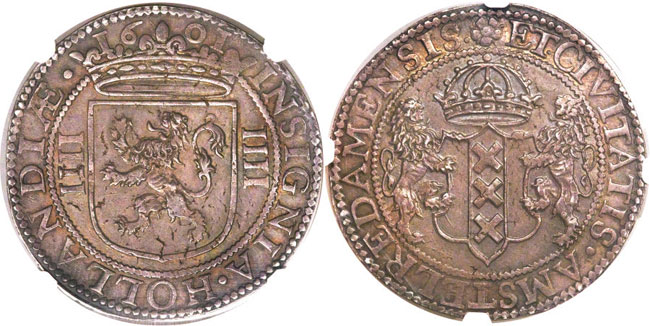 Most collectors will be familiar with the 8 Reales denomination, which for several centuries was the prime trade coin in the world, struck in immense quantities in Central and South-America. What fewer collectors know is that several countries tried to produce 8 Reales as well, trade coins that were to compete in the world market with the familiar 8 Reales struck in the Spanish colonies. One such coin is offered as lot 30301, a 1601 United Amsterdam Company 8 Reales “Daalder”, graded MS63 by NGC. The United Amsterdam Company was one of several predecessors to the Dutch India Company, or VOC, founded in 1602, which dominated the world trade for the next 175+ years. The coin, which has the arms of the city of Amsterdam on the reverse, was struck for circulation in the Netherlands East Indies (present-day Indonesia) and is very rare, seldom coming up for auction. This rarity is estimated at $12,000-$18,000.

These are just some of the highlights that we found while browsing the catalog. More fascinating coins will be offered for sale in the floor sessions, as well as in the online-only session held the following week, which is covered in a separate catalog. After the auction please look on this website for a recap with some of the noteworthy results covered, as well as a show report from the Chicago International Coin Fair.