From July 16 to July 19, the Summer Whitman Expo will be held at the Baltimore Convention Center in Baltimore, Maryland. In conjunction with the show, Stack’s Bowers will organize a U.S. coin auction with a wide variety of numismatic items for sale, including several specialized collections like the Twin Leaf Collection of United States Large Cents and the Douglas C. Kaselitz Collection of United States Coins. In this preview we will take a look at some of the most noteworthy coins in the sale.

The Twin Leaf Collection of United States Large Cents is a specialized collection put together by an anonymous collector. Originally the collection included Large Cents as far back as 1793, but the Baltimore sale by Stack’s Bowers only includes the Middle and Large Dates, comprising 733 lots of United States Large Cents dated from 1816 to 1857, collected by die variety and, in some cases, by die states. In addition to business strikes, the collection includes numerous proof strikes. As production of proofs for collection did not take any substantial form until after small cents had replaced large cents in 1857, any large cent in proof format is rare, with some varieties known by only a few proofs, or even entirely unknown in proof format. 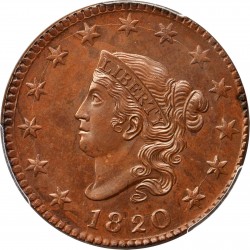 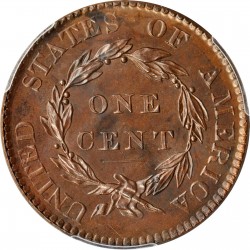 One noteworthy proof/specimen coin in the Twin Leafs collection is offered as lot 2079. Graded Specimen-64 by PCGS, it is the only Newcomb-13 1820 Large Cent that is considered a specimen. In Mint State, this variety is not particularly rare, as thousands of this and other varieties were discovered as part of the “Randall Hoard” that was discovered in the years after the Civil War under a railroad station platform in Georgia. That discovery is the source of the majority of high grade cents from 1816 to 1820 in collectors’ hands today. While the history of the particular coin offered by Stack’s Bowers as part of the Twin Leafs collection is unclear (one of the reasons it is attributed as a specimen instead of a proof), its pedigree traces back to the 19th century and it definitely stands out for its crispness and proof-like surfaces. It is a special coin that will no doubt see considerable attention when it crosses the auction block in Baltimore. 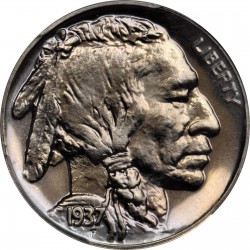 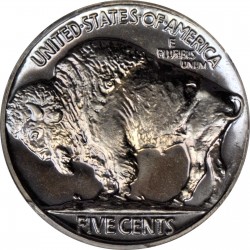 The Buffalo Nickel is a very popular coin that remains well-collected over 75 years after the end of its production. Most Buffalo Nickels seen today, however, are well worn, often lacking a date, which wore off very easily. Lot 4175 in the Stack’s Bowers auction has to be one of the most pristine survivors of this issue, showcasing the design as it was meant to be seen. The 1937 dated coin is graded Proof-68 by PCGS and stickered by CAC. Relatively few proofs were produced of the type, as most years it was struck no proofs were struck for collectors. This resulted in a relatively limited supply from the years 1913 to 1916, 1936, and 1937. The coin offered by Stack’s Bowers is one of just 21 certified at that level from a mintage of 5,769 pieces, with just a single piece certified finer at PCGS.

The Douglas C. Kaselitz Collection, offered in its entirety by Stack’s Bowers, is what can be considered to be a true gentleman’s collection assembled by a passionate, life-long collector. High-grade examples of many United States coin types are included, and the overall collection gives the impression of a well-assembled set that was a labor of love. There are many highlights in the collection, including numerous finest-known pieces, as well as coins pedigreed to famous collections such as Eliasberg and Atwater, among others. While the Kaselitz Collection contains many worthy pieces, we ultimately recommend a leisurely reading of its entire catalog, an online PDF version of which can be found here. 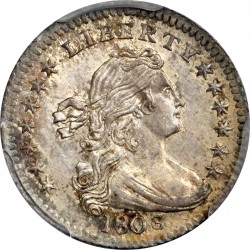 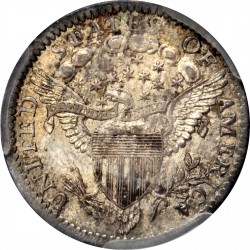 There are two coins from the Kaselitz Collection that we feel compelled to mention. The first one is lot 5104, the finest known 1803 Half Dime, pedigreed to the Eliasberg collection. Graded MS-65+ by PCGS and stickered by CAC, the coin surpasses any other 1803 Half Dime that the grading services have ever seen and is a coin that is very unlikely to have been exceeded in quality by another coin. 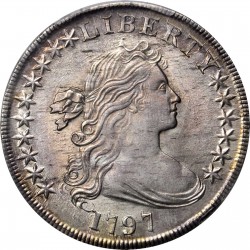 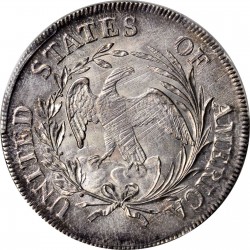 Another high-grade early American rarity is offered as lot 5193, tied for finest known 1797 BB-71 Draped Bust Silver Dollar, graded MS-64 by PCGS. Off the market since the 1972, this coin is one of several high quality coins from the Kaselitz Collection that we expect to see spirited bidding for. 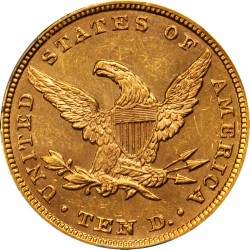 The final coin we will mention in this preview is one that many non-specialists might overlook. Lot 6052 is a very rare PCGS MS-62 1859 Eagle. From a mintage of 16,013 coins, this is one of several dates of the series that are extremely difficult to find in uncirculated condition. While the coin lacks the “sexiness” of an early S-Mint or Carson City issue, the rarity of this coin produced in Philadelphia should not be underestimated. Survivors are rare in all grades, and this is one of just a handful of pieces known that grade better than Extremely Fine. In fact, as the auction catalog mentions, if it wasn’t for the shipwreck of the S.S. Republic, this date would be even rarer in higher grades, as a total of nine examples have been attributed to the famous shipwreck.

This auction, as well as all upcoming Stack’s Bowers auctions, can be viewed on their website.