The final major coin show of this year will be held in Houston, TX from December 3 to December 5. In conjunction with the Houston Money Show, Heritage Auctions organizes a signature auction, offering a wide variety of United States coinage; we’ll take a look at a few of the available coins in this preview. The entire auction can be previewed on the Heritage Auctions Web site, and a full online version of the auction catalog can be accessed here. 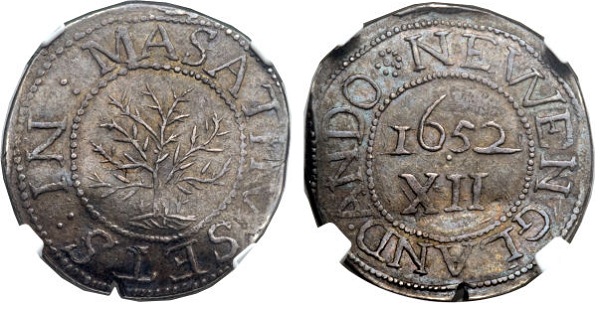 Lot 3002 is the second lot in the auction and the first that we’ll consider. Graded MS-64 by NGC and stickered by CAC, the coin is the finest known example of the Noe-2 1652 Oak Tree shilling. Oak Tree shillings in any grades are rare; of this particular die variety, only 10 or so are known to exist, and this particular piece is clearly the finest of those. Like virtually all Massachusetts silver, the Oak Tree coinage is dated 1652, despite the fact that it was struck from about 1660 to 1667, after the Willow Tree coinage and before the Pine Tree coinage that makes up the majority of Massachusetts coinage in existence. The shilling in the H.A. auction has a pedigree that goes back to at least 1936, and the coin has been plated in numerous major reference works on the series. 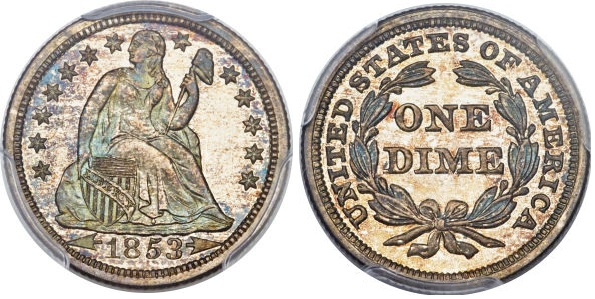 1853 was a year of important changes in American coinage, as the weights of both gold and silver coins were slightly adjusted, and arrows were placed next to the date on coins struck according to the new standards. Coin collecting in the United States had not yet become popular, and Proofs were not struck on a large scale for collectors until a few years later. As a result, Proof examples of the 1853 “with arrows” coins are rare to extremely rare. Lot 3106 in the H.A. auction is the finest “with arrows” Liberty Seated dime, graded PR-66+ by NGC and stickered by CAC. One of just five Proofs known to exist, this is, needless to say, a very rare coin. Lightly toned, the reflective surfaces are indicative of a specially produced coin that has been well taken care of for the last 160+ years. 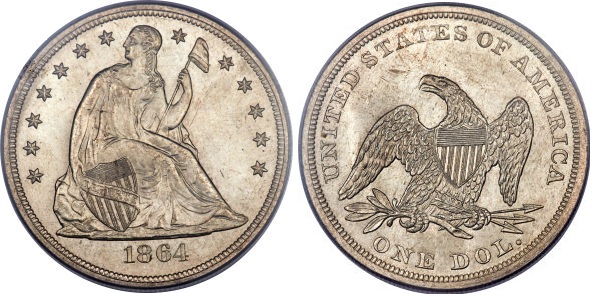 The Liberty Seated dollar was produced from 1840 to 1873 as the largest silver denomination in the United States. Compared to later silver dollars, mintages were relatively low, and many dates are scarce to rare in Uncirculated condition. In fact, a complete Uncirculated set of the series has been heralded as one of the most advanced sets of American coinage ever assembled. Someone wishing to put such a set together faces a lot of hurdles, but lot 3233 in the H.A. auction may provide a good start.

Dated 1864 and struck at the Philadelphia Mint in the midst of the American Civil War, the coin is graded MS-65+ by PCGS, and is tied for the second-finest known of this issue. Just 30,700 1864 Liberty Seated dollars were struck at the Philadelphia Mint that year, of which it is believed many were exported and later melted overseas, resulting in the overall scarcity of this issue in modern times.

Moving on to gold coins and the 20th century, we come to lot 3348, a 1909-O Indian Half Eagle, graded MS-62 by PCGS and stickered by CAC. This coin is important for several reasons: it is the final gold issue struck at the iconic New Orleans mint before its closing; it is also the only gold coin of the Indian Head design struck at that mint. A scarce and popular coin, just 34,200 pieces were produced, of which most went into circulation, and survivors in any grade are scarce. This also makes it the lowest mintage and one of two key dates in the series, together with the 1911-D.

Examples of this issue are rare in all grades, but properly graded Uncirculated examples are very difficult to acquire, with only sporadic offerings at public auction. While the piece in the Heritage auction is graded on the lower end of the mint state scale, it is hard to overlook the importance of this coin, particularly since it is fully original—a rare occurrence for an issue that often comes cleaned and/or heavily bag-marked. 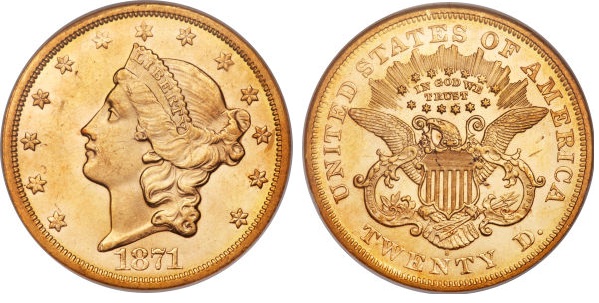 The final lot we would like to discuss is also a gold coin. Lot 3415 is tied with one other example for the finest known 1871-S Double Eagle, graded MS-64 by NGC. This type II Double Eagle had a mintage of 928,000 coins—certainly not small, but most examples show extensive signs of circulation, and Uncirculated examples of this date are a rarity. No hoards or groups of Uncirculated coins of this date and mint mark have ever shown up, and unless some sort of treasure trove is discovered, it is unlikely that many more Uncirculated examples of this date will come to the market in the future.

Also of interest is the fact that the obverse die appears to feature a misplaced date, designated as FS-301 in the Cherrypicker’s Guide, with the top of an extra 8 visible in the dentils below the date.  While the condition of this piece is the main attraction of the coin, the variety, which appears to be scarce, is an added bonus making the coin even more special.