The American Numismatic Association organizes two shows each year, one in the spring and one in summer. While the latter is generally considered the largest coin show in the world, the former is also a very good show, and will be held this year in Dallas during the first week of March. As part of the event, Heritage Auctions organizes a signature auction with a relatively small but quality assortment of coins on offer. In this preview, we will take a look at a few highlights from the auction catalog. All lots discussed here can be found pictured and described on the Heritage Web site.

The best and most noteworthy colonial coins are often offered only as parts of big collections, but occasionally such a coin goes up for sale by itself. Lot 4708 in the present Heritage Auction is such a coin, and it sure is unusual. Dated 1788, it is a Connecticut Copper that has been double struck, with one of the strikes being a brockage. Not only is this a highly unusual error coin, it is obvious that someone put the coin aside right after it was struck, as it has been preserved at an unusually high level for a colonial coin.

Graded MS-62BN by NGC, the coin is regarded as the finest-known example of its die variety, which is actually quite scarce in its own right. Of course, for collectors of this coin by die variety, this is probably not the best example to represent these dies, but it is certainly a noteworthy example for the Connecticut Copper or colonial coin specialist. 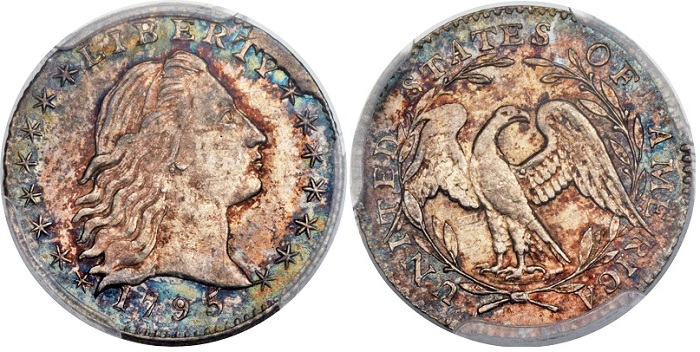 Early half dimes are a series that do not get the respect they deserve. As the smallest silver denomination struck by the early American Mint, they are quite small, and often overlooked by collectors who prefer the larger coins. Still, they do have their own charm, and there are some serious collectors for the series.

For type collectors, or for these specialists, lot 4780 could present an excellent opportunity to purchase a very nice example of this denomination. Nicely toned and graded MS-65 by PCGS, this 1795 Flowing Hair half dime is a fully original, high quality issue that represents this short-lived type very well. It is believed that this year had a mintage of 86,146 coins, making it much more available than the other date of this type, the 1794, which had a much smaller mintage. 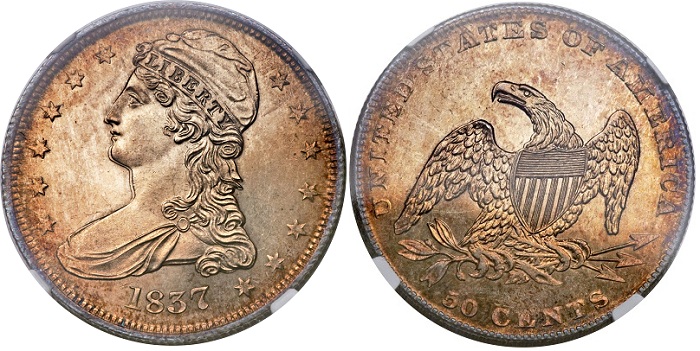 Another special coin from the early Philadelphia Mint is lot 4898, which is an extremely rare specimen strike of the 1837 Capped Bust half dollar, graded SP-65 by NGC. Coming from the Gardner collection, the coin is one of a few special strikes of this type, all of which are rarely available. These coins were not produced for collectors like modern Proof coins, only for dignitaries or by special request. As a result mintages of these special coins are miniscule; during some years none were produced at all.

For this date, which saw the issue of one of two Capped Bust half dollars struck with a reeded edge, it is estimated that just five of coins were struck; this includes coins classified as both specimens and Proofs (though it is unclear if there is a true difference between the two). Of the few coins that are known, this SP-65 is by far the nicest, although there are a few business strikes certified at a higher numerical level. 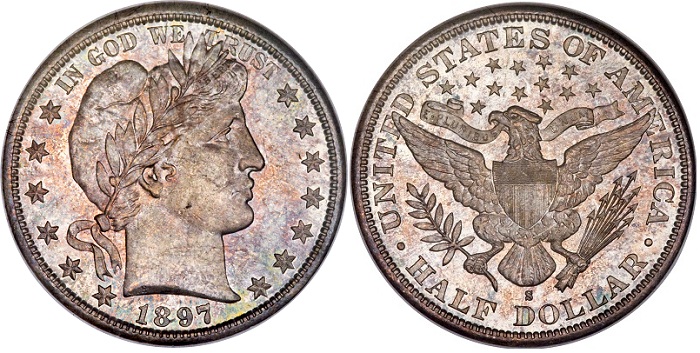 For something completely different we move on to lot 4911, which is the single finest-known 1897-S Barber half dollar. While not considered a key date in the series, it is still a very scarce coin with a mintage of less than 1,000,000 coins — 933,000 to be exact.

The coin on offer is graded MS-68, which is a noteworthy grade for any classic coin, but especially so for the Barber half dollar denomination, which was generally not saved in large quantities unlike the later types of this denomination. Most likely the coin was purchased in person at the San Francisco Mint, perhaps by special request, and meticulously cared for ever since. A very special coin and one of the highest graded coins of the entire type. 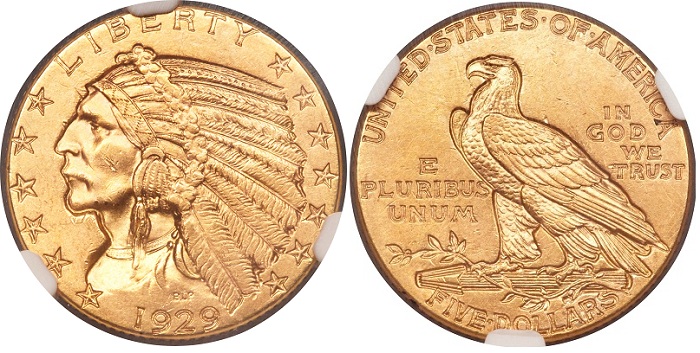 The final coin we will discuss is a gold rarity from the dawn of the great depression. Lot 5077 is an NGC MS-62 graded example of the 1929 Indian half eagle. Struck at the Philadelphia Mint, this year had a mintage of 662,000 coins, which is not particularly low. Interestingly enough, it would be the first five-dollar gold piece struck after 1916, and would also be the last. After minting, virtually all of these coins went into storage, as they were not needed during the harsh economic times.

Over the following few years, and in particular after 1933, when President Roosevelt recalled all gold then in circulation, the majority of 1929 half eagles were melted. As a result, the 1929 half eagle is now one of those 20th century gold coins much sought after by collectors.

All images provided by Heritage Auctions.