The United States Mint recently sold out of the 2009 Presidential $1 Coin Uncirculated Set. This product originally went on sale April 2, 2009 and was priced at $15.95 per set.

Each set included the 2009 Presidential Dollar Coins from the Philadelphia and Denver Mints. These four coins honor the ninth through twelfth Presidents of the United States, William Henry Harrison, John Tyler, James K. Polk, and Zachary Taylor. Each coin is struck using a special satin-finish that the US Mint uses for coins included in collector sets. 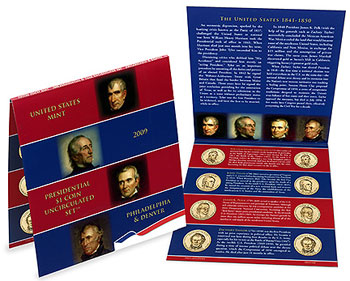 The eight coins are mounted in a folder, which includes biographical information and quotes. The front of the folder includes a color portrait of each President.

The last reported sales for the 2009 Presidential Dollar Uncirculated Set were 105,059.

The US Mint has offered similar products each year since the Presidential Dollar series began in 2007. For the first year, the US Mint offered both separate Philadelphia and Denver Mint folders, as well as a combined folder with both Mint’s coins. For 2008, only the combined folder was offered.