Although the US Mint has not yet announced the final designs for the 2011 Presidential Dollars, the circulation release dates for each of the four coins to be issued are now available. Next year’s coins will feature the 17th to 20th Presidents of the United States, Andrew Johnson, Ulysses S. Grant, Rutherford B. Hayes, and James A. Garfield. 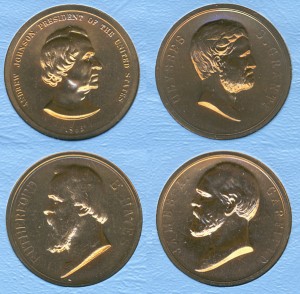 Note: The images above are from the series of bronze medals issued by the US Mint for the Presidents.

Each Presidential Dollar will feature a portrait of the former President on the obverse along with the name, order of the Presidency, dates served, and motto “In God We Trust”. The reverse of each coin will feature an image of the Statue of Liberty intended to represent the concept of Liberty. The inscriptions include “United States of America” and the denomination expressed as “$1”. The date, mint mark, and motto “E Pluribus Unum” appear on the edge of the coin.

The official circulation release dates for the 2011 Presidential Dollars appear below. Numismatic versions of each coin incorporated into various products offered by the United States Mint may be released at different dates throughout the year.

Banks and other depository institutions will be able to order unmixed quantities of each of the 2011 Presidential Dollars during special ordering periods. For a three week period prior to the circulation release date and a two week period after, they may order boxes containing $1,000 worth of wrapped rolls, or $2,000 bags of loose coins by special order.

The United States Mint offers $25 rolls of circulating quality coins for sale directly to collectors. These have been priced at $35.95 each with sales beginning on the circulation release date.

The Mint has also offered a limited number of releases through the Direct Ship Program, which offers $250 boxes of coins at face value. However, typically the newest releases have not been made available through this program.