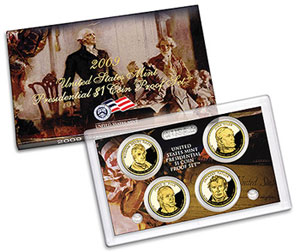 The 2010 Presidential Dollar proof coins included in the set are manufactured by a special process, which includes striking the coins multiple times with specially polished dies. This creates brilliant coins with sharp relief and mirrored backgrounds. Frosted raised elements of the coins create a special cameo effect for the proof coins.

The four proof coins are housed in a protective plastic lens that allows the edges of the coins to be viewed. This is placed in an illustrated outer cardboard box.

The sets are priced at $15.95 from the United States Mint plus applicable shipping and handling charges.