During the initial years of the Presidential $1 Coin Program, the United States Mint introduced a wide array of numismatic products related to the series. Some of these products experienced strong sales and continue to be offered through the current year, while others fared more poorly and were discontinued. One product type that falls into the latter category is the short lived Presidential Dollar Historical Signature Set. 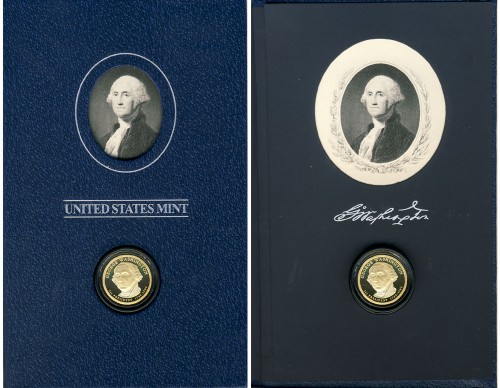 The set was introduced on April 8, 2008 with the first release featuring George Washington. The sets consisted of a single proof Presidential Dollar placed within a textured, leather-like folder. This folder opened to reveal an intaglio print of the President from the Bureau of Engraving and Printing and a reproduction of the official presidential signature courtesy of the White House Association. The folder was placed within an outer storage box and accompanied by a certificate of authenticity signed by Edmund Moy, Director of the United States Mint, and Larry R. Felix, Director of the Bureau of Engraving and Printing.

Each set was priced at $19.95 with no household order limits or maximum product limits indicated.

Interestingly, the United States Mint did not issue a press release or provide any other notification for the launch of the new product type. Rather, the sets were simply made available for sale on the Mint’s website. A press release which was issued the following month mentioned the release of the second Historical Signature Set featuring John Adams amidst an array of other Presidential Dollar products.

Releases for the third and fourth sets featuring Thomas Jefferson and James Madison were spaced roughly one month apart. The coins included in these initial four sets had actually been released in the previous year and were dated 2007.

The next four releases featuring James Monroe, John Quincy Adams, Andrew Jackson, and Martin Van Buren, all dated 2008, were released at the same time on October 27, 2008.

Less than a month later on November 10, 2008, the United States Mint announced a major overhaul of its numismatic product line, which reduced their total offerings from 550 products to only 200 items. Among the discontinued products were the Presidential Dollar Historical Signature Sets.

This would mark the end for the product type after less than a year. The 2007 and 2008 sets remained available until the end of the year, at which point sales ended and remaining unsold inventory was “detrashed” or disassembled and reclaimed. Due to the short period of availability, the sets containing the 2008 Presidential Dollars experienced extremely minimal sales, culminating with a low of 3,496 for the John Quincy Adams Historical Signature Set, based on last available sales figures.

Following the discontinuation of the product line, secondary market prices for the sets rose, with some issues selling in excess of $200 each. Price levels have since subsided, although the final four sets can be difficult to locate.