Circulation release dates for the 2012 Presidential $1 Coins have recently been provided by the Federal Reserve Banks. Four different designs will be released featuring the 21st to 24th Presidents of the United States. 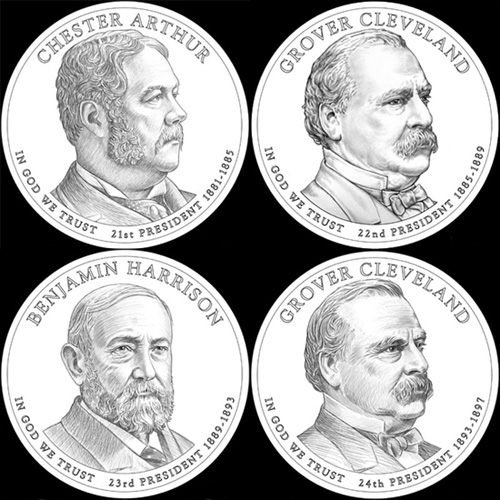 The United States Mint is yet to announce the final obverse designs for the coins, although design candidates were previously reviewed by the Commission of Fine Arts (CFA) and Citizens Coinage Advisory Committee (CCAC) in July 2010. The authority to select the final designs rests with the Secretary of the Treasury, who will take into consideration the input and recommendations provided by the CFA, CCAC, and the United States Mint. The design candidates recommended by the CFA are included in this article.

The published release dates for the 2012 Presidential Dollars appear below. Note that there are two separate coins issued for Grover Cleveland since he served as President during two non-consecutive terms.

Under the authorizing legislation, Federal Reserve Banks are required to make each design of the Presidential Dollar coin program available to depository institutions in unmixed quantities during an introductory period. To comply with this requirement, the Federal Reserve Banks have established a special five week ordering period for the program. For a period extending from three weeks before the circulation release date to two weeks after the circulation release date, banks and depository institutions may order boxes containing $1,000 worth of wrapped rolls or $2,000 bags of loose coins for each newly released design.

The requirement for the special ordering period has been cited as one of the key reasons for the build up of more than $1 billion Presidential Dollars held in storage. Reserve Banks are compelled to order large quantities of each new coin release and distribute these newly minted coins to banks rather than drawing down the existing stockpile. As a portion of the newly issued coins remain unordered or are ultimately redeposited, the stockpile continues to grow.

A parade of legislation has been introduced seeking to abolish or limit the Presidential Dollar program due to the lack of public acceptance and costs of maintaining the stockpile. A single bill takes the opposite approach and seeks to phase out the $1 bill in favor of the $1 coin, citing long term cost savings to the government.

There have been vocal supporters and opponents of several of the bills, although some have a vested interest in the outcome. As yet, none of the bills have been voted on in the House of Representatives or Senate. Until one of the bills becomes law, the Presidential Dollar series will continue its current course, honoring four former Presidents per year.