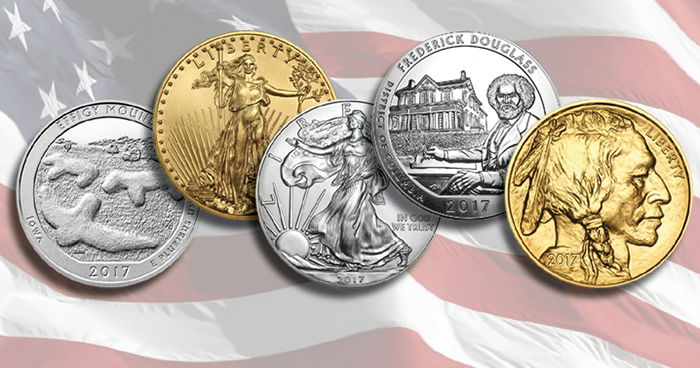 The Mint has updated its American Eagle gold bullion figures, which were lagging behind earlier this week. The current precious-metals bullion sales report thus covers the period from the last report (May 1, 2017) through May 11, 2017.

Also during this reporting period, the Mint records sales of 1,200 America the Beautiful Frederick Douglass National Historic Site 5-ounce bullion coins, along with an additional 500 Effigy Mounds National Monument 5-ounce bullion coins. These sales together account for 8,500 ounces of silver for the period; 204,000 ounces’ worth of ATB 5-ounce silver coins have been sold this year.

The total volume of silver bullion sold by the Mint during this period comes to 458,500 ounces, with the year-to-date total reaching 9,976,500 ounces.

The value of an ounce of silver on this day last week was $16.50 according to the London Bullion Market Association. Silver’s average last week, Monday through Friday, was $16.64 per ounce, a 98-cent drop from the previous week’s average of $17.62.

Over the course of this reporting period, 1-ounce American Eagle gold bullion coins sold a reported 2,000 ounces. (No sales are recorded for 1/4-ounce AGE coins for the period.) This brings the Mint’s year-to-date total for American Gold Eagles to 176,000 ounces. American Buffalo 1-ounce gold bullion coins sold 1,000 units for the period, bringing the 2017 total for the coins to 61,000 ounces of gold. For both coin types together, the Mint’s year-to-date figure is 237,000 ounces of gold.

Coin Update sponsor APMEX carries a wide range of bullion products from around the world, as well as select numismatic items.

In anticipation of the U.S. Mint’s first-ever palladium bullion coin, Coin Update is now tracking palladium values in this report. The metal is currently at $801.00 per ounce according to the London Bullion Market Association, precisely the same price as on this day last week. The average value of an ounce of palladium last week was $806.25, up a bit from the previous week’s average of $804.60.   ❑