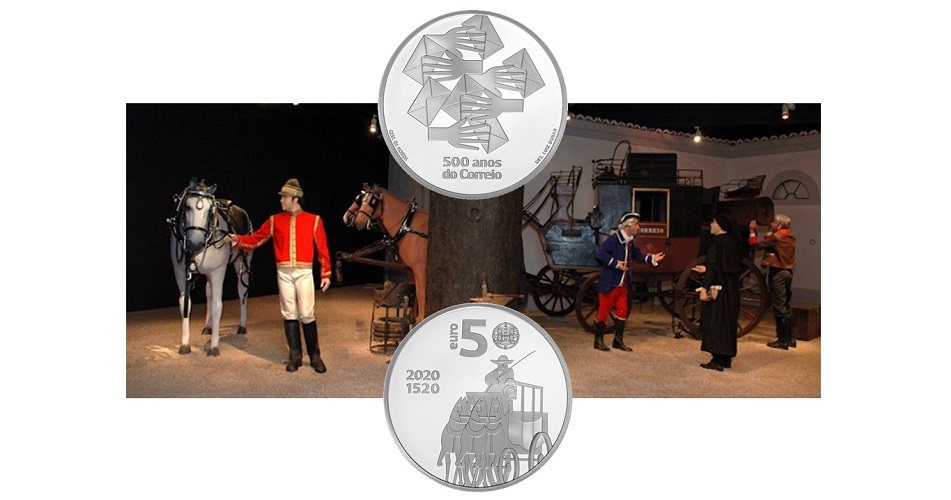 The Impresna Nacional Casa da Moeda (INCM) has released new collector coins which are in remembrance of the 500th anniversary of the entity that created Portugal’s national post offices, founded on the 6th November 1520. The establishment of the Correio-Mor do Reino was by royal warrant signed by King Manuel I, who published the charter creating the Portuguese postal service, to which his knight Luís Homem (died 1532) was appointed its first postmaster general. The establishment of the public postal service in Portugal was the result of the emergence of Portugal as both a global and maritime power. The creation of this type of communication service was initially intended to meet the needs of the Portuguese nobility. The service later encompassed merchant and trading classes to maintain closer and more up to date contacts with other states, and each other, as trade exponentially increased.

Portugal’s mail service became available to the general public which gave any Portuguese subject the right to use it for a stipulated payment. Thus, it became one of the first means of communication for the purpose of delivering written correspondents anywhere in the world. The Correio-Mor do Reino remained under royal control until 1606 when King Filipe II of Portugal (also Felipe III of Spain) (1578–1621) sold it to Luís Gomes da Mata Coronel (1558-1607) for the princely sum of 70,000 gold cruzados. With this sale, the Mata family established the first postal dynasty in the world and a monopoly which lasted for almost two centuries. It was an era which also saw the Correio-Mor do Reino modernise their services.

Despite the Correio-Mor do Reino being available to the general public, only the wealthiest had access to the postal service, which remained expensive to use due to its inefficient methods of transporting communications. Most of the reason for the postal service’s inability to operate effectively was due to the poor maintenance of roads and weather conditions since letters and parcels were delivered on foot or by horseback. Overseas recipients, mainly from Brazil, which was Portugal’s most prosperous colony had to conform to the sluggish sea routes and all the risks involved with crossing the Atlantic Ocean.

With a significant change in Portugal’s political situation towards the end of the 18th century, led to the postal service being returned back to the crown, which nationalised it in 1797 by royal decree signed by João, Prince Regent of Queen Maria I. Over time, the Correio-Mor do Reino, transitioned into state service. After the collapse of the Portuguese monarchy in 1910, the Correio-Mor do Reino became the Correios de Portugal and eventually the Correios, Telégrafos e Telefones (CTT), which it is known as since 1911. In 1969, CTT was transformed into a public company, which opened markets and greater competition. By 1992, CTT was transformed again into a public limited company to meet the requisites of greater European Union regulations, which also meant CTT was separated from the telecommunications portion of the business, forming a separate autonomous company. Continuing changes within EU regulations saw the CTT emerge as a wholly privatised company with its shares being listed on the Portuguese stock exchange on the 5th December 2013. In 2015, the CTT embarked on a new ambitious venture when they launched the Banco CTT on the 18th March. This new brand coincided with the simultaneous opening of 52 branches throughout Portugal, becoming the largest launch and opening of any bank in Portugal.

The new coins are designed by graphic artist Luís Duran, who has depicted a collection of stylised hands and letters in the centre of the coin’s obverse. The text 500 ANOS DO CORREIO is placed just under the main design.

The reverse includes a contemporary depiction of the stagecoach drivers with a horse and carriage of the Correio-Mor do Reino era. The denomination of 5 EURO and the Portuguese national crest is shown above the design with the years 1520 and 2020 placed to the left.

Each silver Proof coin is encapsulated and presented in a custom case with a base created out of rich Portuguese cork placed over a square of lucite/Perspex. For additional information about this coin and other coins available from the INCM, please visit their website.