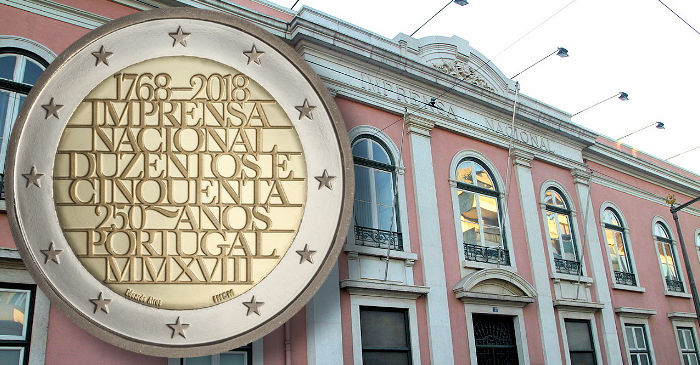 The Imprensa Nacional Casa da Moeda (INCM) has issued (22nd May) new €2 commemorative coins which are in celebration of the 250th anniversary of the country’s primary national press service which was founded in 1768.

In terms of fostering a climate of cultural growth, the reign of Portugal’s King Don José I (Joseph) (1750-1777) was especially important, since he was a monarch characterised as a determined sovereign who wished to create modernised institutions as he was quite adapted to the mentality of Enlightenment for the latter half of the 18th century. Despite the objections of a more conservative clergy and church, the king managed to encourage the foundation of the Royal College of Nobles and a policy of reform of the University of Coimbra. With a further decree on the 24th December 1768, which was written by the Marquis de Pombal (1699–1782), secretary of the State of Internal Affairs of the Kingdom, the founding the institution came into being. Part of the decree included the message:

The purpose of this establishment is to bring to life letters and words and to raise the importance of their usefulness to the public by their very production.

With its founding of a printing service, the state also implemented a School of Graphic Arts and Typography to ensure the service could continue without hindrance. With royal patronage, typographic production and printing began to benefit Portugal in the first half of the 18th century from a great technical advance of engraved printing and the improvement of book-binding techniques which, in the early years, the Royal Printing Service began to publish hundreds of titles annually. During the reign of Queen Maria I (1734–1816), the Royal Press and Typographic introduced a national newspaper which was entitled Gazeta de Lisboa, which became the country’s first official newspaper. In 1833, the Royal Press and Typographic service would be known simply as the National Press thereafter. The name of the Gazeta de Lisboa was itself later changed to “Diário da República” after the country became a republic in 1910 and is still in print both as a traditional newspaper and in electronic form.

In 1968, Portugal’s National Press service celebrated its second centenary, with the Official Printing Office being recognised as having continued to modernise itself to adapt to new technologies and market needs. On the 30th December 1969, and by official decree, the National Press became a wholly owned government entity which would itself merge with the Portuguese State Mint in July 1972, becoming the Impresa Nacional casa da Moeda (INCM) — issuers of circulation and commemorative coins of Portugal.

The commemorative two-euro coin celebrating the 250th anniversary of the National Press is designed by artist Eduardo Aires, who has created a simple design which includes the text 1768 – 2018 IMPRENSA NACIONAL DUZENTOS  E CINQUENTA 250 ~ ANOS PORTUGAL XXXVIII. The text is arranged over eight lines and also includes the logo of the INCM, as well as the name of the coin’s artist, below the primary design.

The reverse of the two-euro coin is that used on all common circulation coins depicting the numeral 2 and the current map of the member states of the European Union, as designed by numismatic artist Luc Luycx of the Royal Belgian Mint.