The Imprensa Nacional Casa da Moeda (INCM) have launched two new coins which begin a new series entitled “Portuguese Ethnographic Treasures”. The series looks to feature various elements of Portuguese life and aspects of its rich and unique culture. This year’s coins feature a design which focuses on one of the country’s more important foundations of the Portuguese economy, that of agriculture and farming. The reverse design includes an intricately detailed image of oxen yokes – a symbol of both the richness and beauty whose abundance in the countryside was once plentiful and admired for their artistic craftsmanship and colorful paintings. Wooden yokes, usually hand carved from local materials, were easy, effective and economical ways to harness the locomotive energy of the ox. Earlier yokes were simple in design compared to the more complicated harnessing systems used for horses. The first yokes were head yokes used in Southeastern Europe and Western Asia. 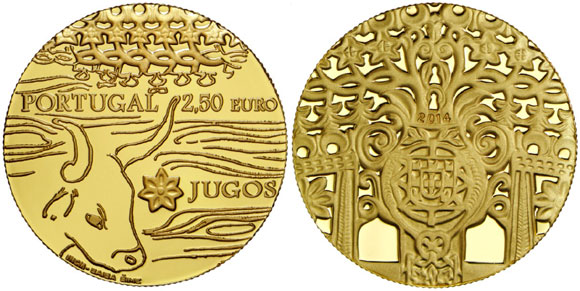 In much of Portugal, these items were once elaborately decorated with carvings and detailed floral painting. The yokes used on market days were carved with flower motifs and crosses and when the local festivals took place, it wasn’t just the villagers who dressed in all their finery. The animals would be scrubbed down and strapped into a luxury carved painted wooden yoke and paraded around for all to admire. Several of these finer specimens which have survived the era of motorized farming and tractors  are now included in ethnographic museums all over the country or decorating quaint out-of-the-way restaurant walls up and down the country. Some of the farmhouses in the northwest of the country which have been converted into rural tourist accommodation display their old carts and tools as an additional attraction.

The coins, both utilizing the same design on both the gold and silver versions are designed by Baiba Sime and includes a rendition of an intricately carved wooden yoke on the obverse. Integrated in the design is the national coat of arms of insignia of the country along with the year of issue “2014”. The reverse depicts the stylized and linear head of an Ox together with elements of the obverse design and the text “PORTUGAL 2.50 EURO” along with the Portuguese word for yokes – JUGOS just to the right of the Ox head.

The coins, with their low mintage of just 2500 pieces each are packaged in a presentation box which cleverly re-creates the yoke depicted on the coin. Both the yoke is inserted in a larger wooden box and enclosed with a perspex or lucite cover. A cupro-nickel version of the precious metal coins is also available.

For more information on this and other coins on offer from the Imprensa Nacional Casa do Moeda, please visit their website at: https://www.incm.pt/portal/loja_detalhe.jsp?lang=en&codigo=102427 Information offered in both Portuguese and English – international orders dispatched.