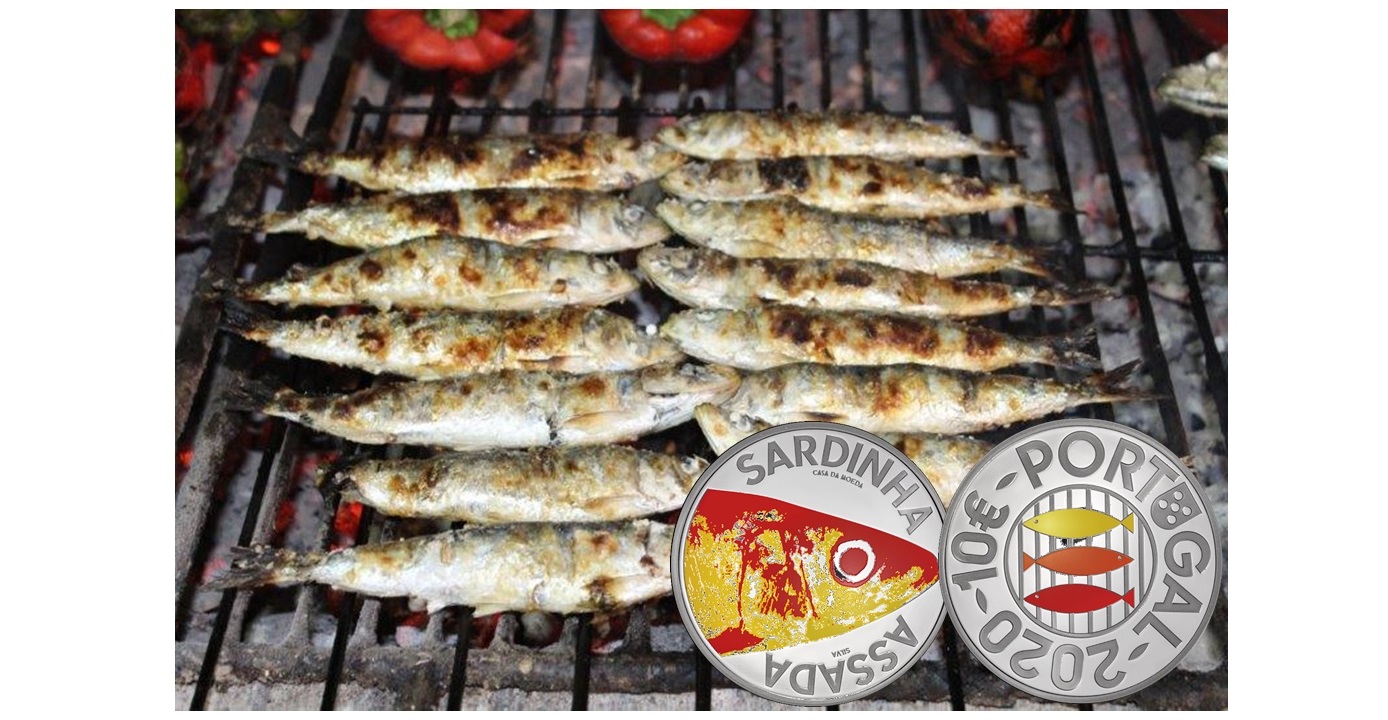 The Imprensa Nacional Casa da Moeda (INCM) has launched a new collector coin series which focuses on one of Portugal’s greatest national attractions, Portuguese cuisine. National cuisine has evolved over centuries, and each distinct country has their own specialities which have become synonymous with a particular people or region.

Traditions are also passed down from generation to generation, and the enjoyment of food is usually front and centre to how many of us socially relate with family and friends, sharing knowledge, customs, and rituals around each dish. After all, the saying “we are what we eat” has never been more prevalent as many peoples look to try other foods, as well as re-discovering national dishes forgotten or which have enjoyed a resurgence. In celebration of the great variety and richness of Portuguese culture and gastronomy, the launch of Sabores (flavours) de Portugal collector series opens with the first coins that features one of the country’s most well-known and popular dishes: Roasted sardines (sardinhas assadas). These tiny fishes are both abundant off the coasts of Portugal and are a traditional dish very much in demand. They are always present at popular festivals.

So popular is this dish, which has many varied ways of preparation according to region, that it has its own dedicated festival held during the summer months of July and August. The preparation of the sardines often includes a marinade of lemon, spices, tomatoes, and olive oils with garlic, which is applied to the sardines while numerous rows of the small fish are cooking on open grills. The result is a mouth-watering delectable meal often served with a selection of vegetables and pieces of bread to soak up the oils. Don’t forget to squeeze some more fresh lemon juice over them before you enjoy! 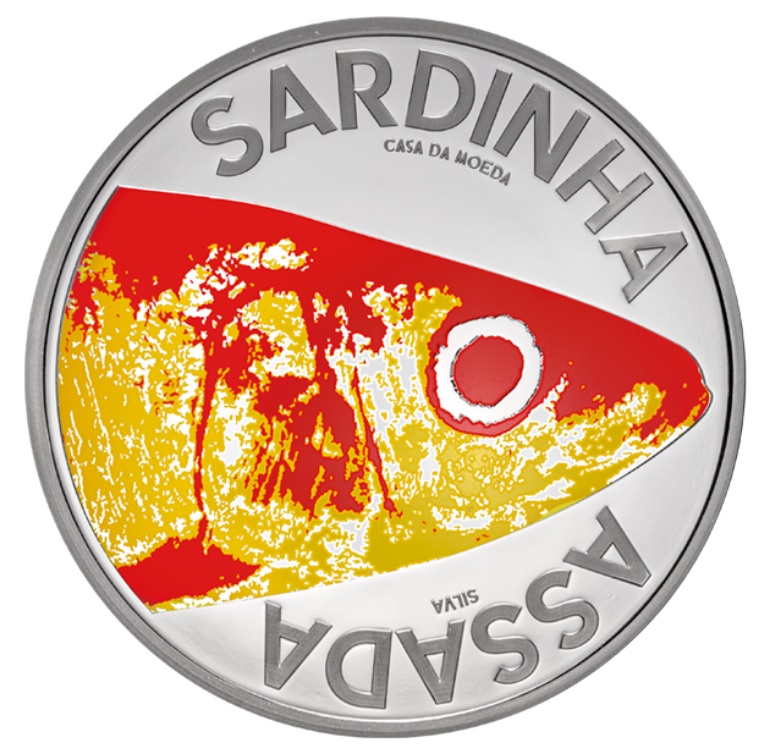 These collector coins are designed by the graphic artist Jorge Silva, creator of the popular Sardinhas de Lisboa annual festival, now in its 10th year, which focuses on Portuguese cuisine, culture, and especially these small fish. The obverse side shows a single sardine in vivid colours of red and yellow, symbolising their sometimes spicy taste when grilled. The bold text SARDINHAS ASSADAS is seen placed around the central design, along with the name of the mint and designer in smaller text. 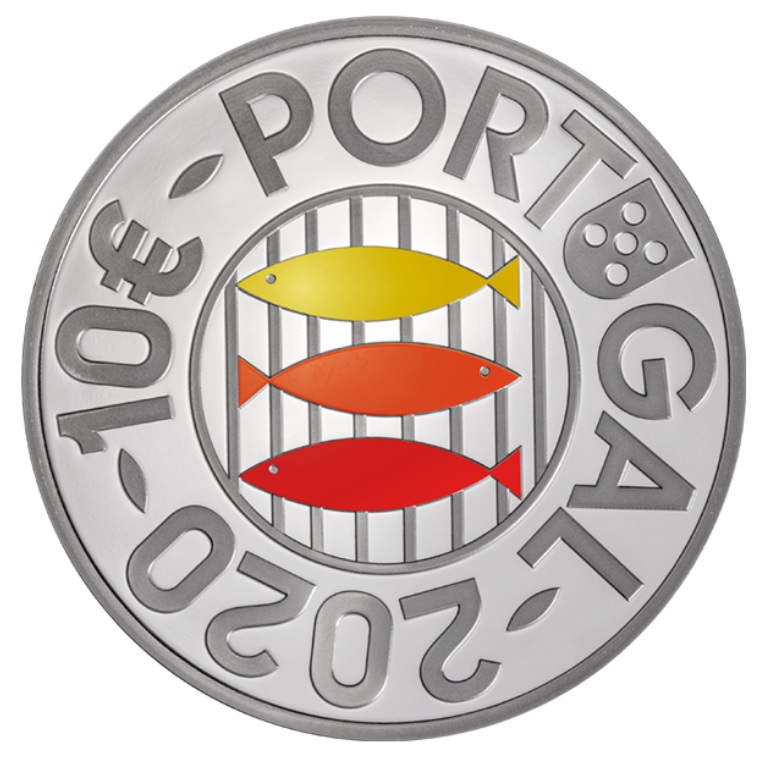 The reverse includes an image of three small sardines on a grill facing in an alternating direction, as is custom. They’re also depicted in vivid colours of red, orange, and yellow, centred with the bold text PORTUGAL – 2020 – 10€ placed around the design. 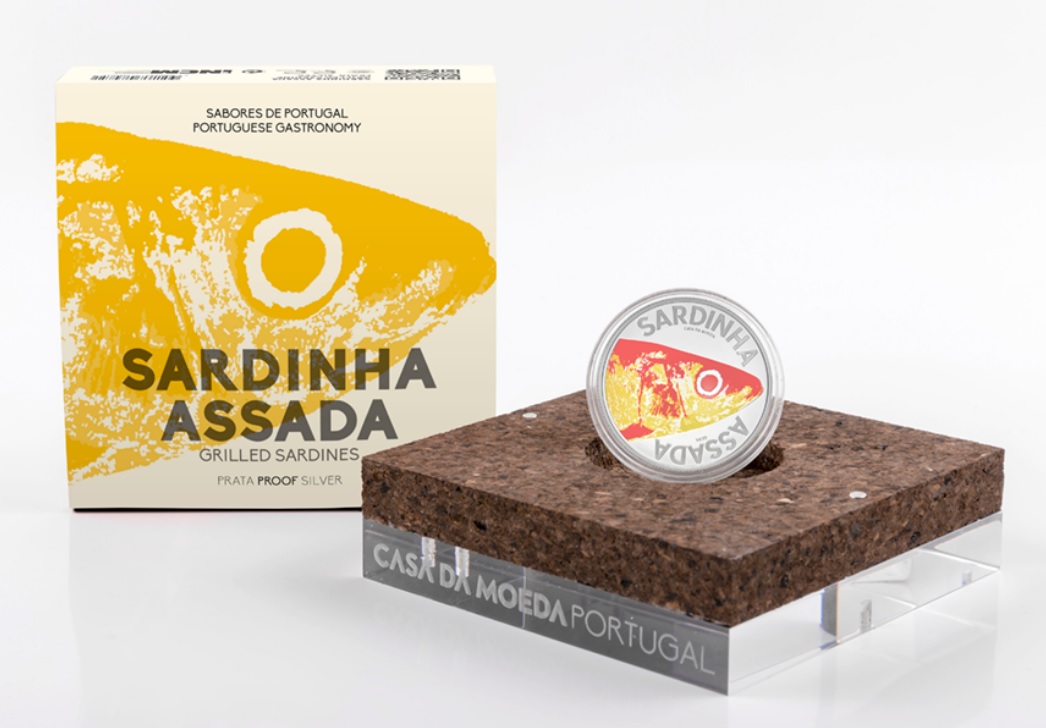 The silver Proof coins are encapsulated and presented in a presentation case with a base created out of rich Portuguese cork placed over a square of lucite/Perspex. For additional information about this coin and other coins available from the INCM, please visit their website.